Contents show
1 What is Causing my RC Helicopter to Wobble in Flight?
2 What Kind of Problems Can Occur From Helicopter Vibration and Wobble?
3 What Can I Do to Prevent RC Helicopter Wobbling and Vibration?
3.1 Do not install the RC helicopter’s blades before you start the helicopter up.
3.2 Make Sure That You Balance the Main Rotor Blades and Tail Blades
3.3 Strap Down the RC Helicopter and Spin the Blades Before the Hover Test
4 In Conclusion
4.1 Related Posts:

Have you ever wanted to be a helicopter pilot but couldn’t get over your irrational fear of heights? Well, thanks to RC helicopters, you can vicariously live your dream while being safely positioned on the ground. But what do you do when the flight seems a little bit rocky?

Is there a way to keep your RC helicopter flying safely?

If you are here, you have most likely noticed that your RC helicopter is wobbling a bit after you get it into the air. While it may seem like the RC helicopter may be defective, or it does not seem like a big deal, we can assure you that neither is the case, and we’re going to show you how to address that problem, among others, while you’re here. 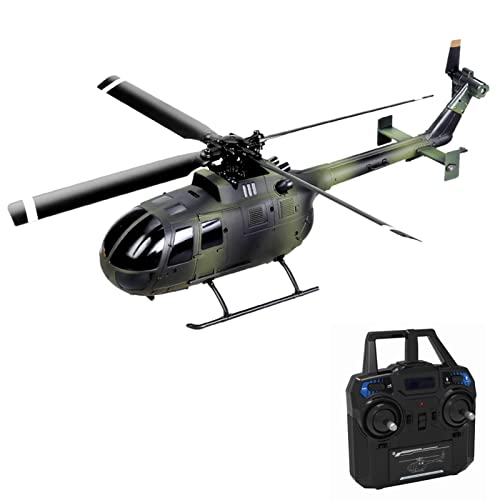 Most cheaper RC helicopters look inexpensive but this model doesn’t. It has a single blade and looks like a real helicopter unlike many of the other models.

This model doesn’t break the bank and is far cheaper than drones with similar specs.

What is Causing my RC Helicopter to Wobble in Flight?

When it comes to RC helicopters wobbling and vibrating in the air, it is often a hurdle that many people new to building RC helicopters must deal with and figure out. To help you avoid those same hurdles, we are going to break the problem and solutions down in a manner that isn’t going to fry your brain or have your head wobbling.

There could be a few reasons why your RC helicopter may be wobbling in flight. The primary and most common issue that we are going to address is going to be the helicopter blades. When your helicopter is wobbling, it could be an indication of another issue as well. That issue is helicopter vibration.

What Kind of Problems Can Occur From Helicopter Vibration and Wobble?

RC helicopter vibration and wobbling can cause some serious issues. These are issues that you must address as soon as possible if you want to fly your helicopter safely without worrying about harming yourself, others, or damaging your helicopter permanently.

With these risks and issues in mind, it is important to ensure that you take the time to address these problems with your RC helicopter as soon as possible. You can also prevent some of these issues by taking the time to assemble the RC helicopter correctly.

Next, we are going to give you some pointers to help you and keep you and everyone around you safe.

What Can I Do to Prevent RC Helicopter Wobbling and Vibration?

Since we have pointed out the potential difficulties in controlling the RC helicopter and the associated safety risks that come with RC helicopter wobbling and vibration, it is time to give you the necessary information to prevent and fix the issue if it occurs.

Do not install the RC helicopter’s blades before you start the helicopter up.

Hopefully, there will not be any noticeable vibration in the helicopter at this point. However, if you notice that there is some vibration, it is important to double-check that the main blade grips on the feathering shaft have been tightened so that there is no wobbling back and forth

You will need to make sure that the main and tail shafts are not bent. If they are, that can cause a lot of the vibration and wobbling that you are experiencing. If you notice that there is much vibration before installing the blades on the RC helicopter, you will need to check the main and tail shafts to make sure that they are not bent.

One of the ways you can check to see if the main shaft is bent is by rolling it on a table.

If you don’t have an RC helicopter blade balancer, a simple and cheap alternative is using a bolt, a nut, and a vise. You can even use two blocks of wood as a substitute to balance the helicopter blades. If you would like to see a detailed explanation, we recommend either the first video for a short explanation or the second video for something longer and more detailed.

The same measures must be taken with the tail blades and flybar paddles. If the flybar paddles are out of balance, they will cause the RC helicopter to wobble and vibrate. It is important to use tape to balance the blade on the center of gravity (CG) point. Blenderm tape is a medical tape that suits this purpose because it’s extremely light and sticky.

If you discover that the blades for the RC helicopter are unbalanced, you should return them for another set. It does not matter how expensive the blades were. If they come out of the box unbalanced and you discover it during their examination and decide to use them anyway, you could be putting yourself and others at risk.

Here is a video teaching you how to replace the blades if needed.

If the helicopter is going to wobble and vibrate to the point that it disassembles itself, it’s best to make sure it happens while strapped down. That’s better than the alternative of raining down terror from above. Don’t stress out if it rocks a little at startup. This is normal. The blades are adjusting to their place in the grips and should even out as the helicopter reaches full RPM.

Serious vibrations and wobbling are usually very easy to spot. The boom supports will begin to vibrate violently, and the vertical tail fin will become “blurred” from the vibration. The boom/canopy can also see, blurred from intense vibrations or wobbling. If the vibration on the RC helicopter is not visible, you will not need to take further action.

The sound from the motor will cause the frame and boom to make a buzzing sound. However, it should not shake the helicopter’s frame or cause any visible “blur” on the frame or boom when it reaches full RPM. If anything appeared to blurry on the boom or frame, you might need to rebalance the main or tail blades, or even the flybar paddles.

If you notice that your RC helicopter is still vibrating and wobbling violently after making sure everything is balanced, you will need to check the main, feathering, and tail shafts of the helicopter. If the main shaft is bent, it will cause a very noticeable wobble at full RPMs. A bent tail shaft will lead to the boom vibrating and wobbling violently.

No pilot of an RC helicopter wants to deal with wobbling and vibration during the flight of their helicopter. It is important to take every measure necessary from the very beginning to make sure that the blades are balanced and tightened properly, and there are not any bends in the main and tail shafts.

Remember, it is not worth it for you, your helicopter or others to try to cut corners and not make sure everything gets assembled correctly before taking it out for a flight. It is easy to lose control of a violently shaking and wobbling RC helicopter, or it might even break apart in the sky, causing harm to you and others. Thanks for reading and be sure to fly safe!