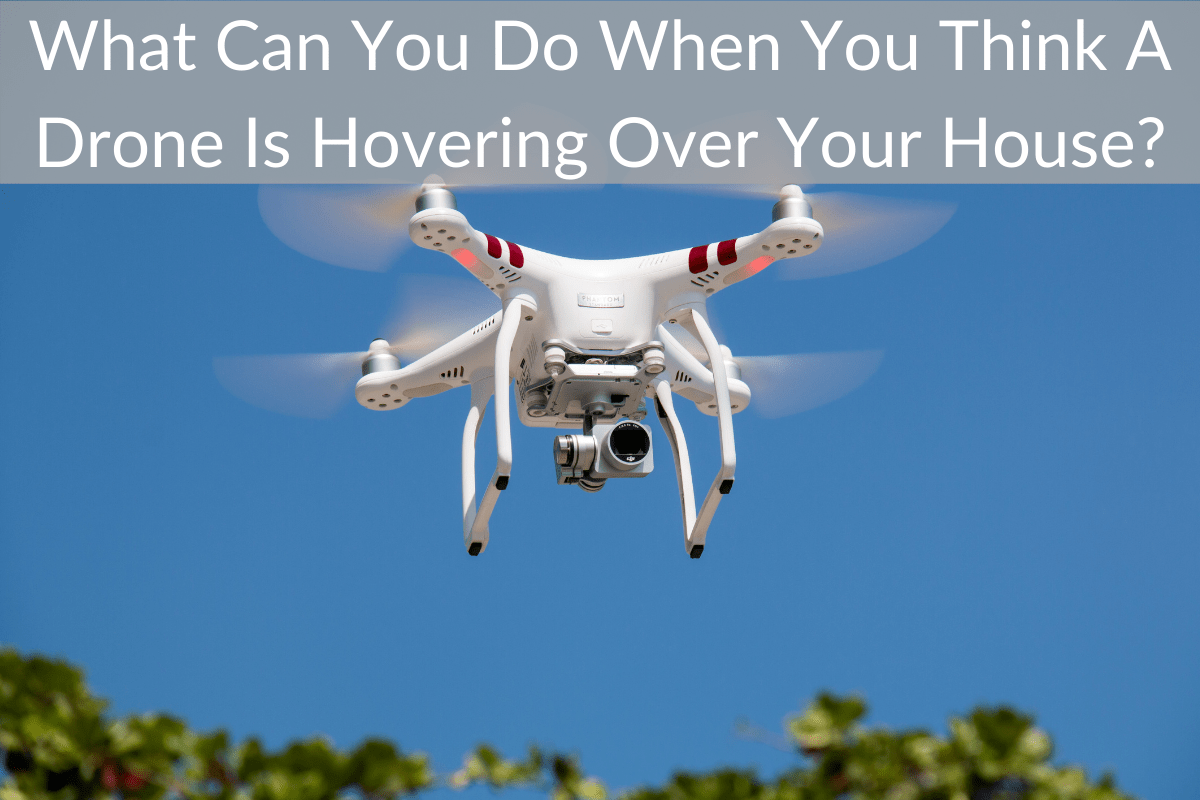 Have you ever been in your house and thought that you heard a drone flying over your house? Maybe you were in your backyard and saw someone flying a drone over your house. Well, in this article we will go over everything you need to know about drones and what you can do when one is over your house.

So what can you do when you think a drone is hovering over your house?

If a drone is simply flying over your property, there is nothing that needs to be done. If one is hovering over your house though, you should try to contact the owner of the drone, or contact the non emergency police number if the owner will not talk with you or stop.

If you want to see our top drones that we love to play with and fly, you can look at them by clicking here.

If you want to know more about drones hovering over your house and what you should and should not do, you will want to keep reading this article.

Drone inventions were not properly documented over the years, but they were known to exist 100 years ago. It was documented that even Nikola Tesla in 1915 described such aerial combat vehicles. Its mass production was firstly done in the USA for world war II. Originally, drones were made for the military. It was not until a few years later that it was available to be used for recreation, photography and other commercial uses.

When drones first released, there was an incident in Oregon when a woman noticed something outside her window that was emitting light. It wasn’t an alien invasion, but a drone flying around her house. If you are just like her, here are a few things to keep in mind when you see a drone hovering over your house.

Related Post  How To Build An RC Helicopter: A Complete Guide For Beginners

Unfortunately, you are not allowed to shoot drones even if it is over or on your property. Before you go to get your gun, you should make sure to read this article carefully. What if someone spots a drone hovering over your house or maybe even in your backyard? What should be done? According to US federal law, you cannot shoot any aircraft including drones legally. This makes many people wonder why and how this can be. Well, the Federal Aviation Administration or FAA is in charge of all aircrafts. Title 18 of the United States code states that “whoever wilfully sets fires to, destroys or disables – shall be fined under this title or imprisoned not more than twenty years or both”. In simple words, you cannot shoot down a drone, or you will be fined, or taken to jail.

Is drone flying a private nuisance?

What if you know exactly who is flying their drones over your house? Calling them first or texting them would be the first step. However, if there is no response and no valid reason from anyone you know to be flying their drones over your house. You may need to contact the police. You may have a reason to file a private nuisance. In this case, a private nuisance is the sound of the whirring arms or blades of the drone that somehow disturbs you from your quiet time, bonding with your family or your enjoyment time within your home. Most of the time though, the nuisance will be taken care of by the police as most drones have cameras, and it would be an invasion of privacy.

Are drones trespassing if they are above my house?

You will want to make sure that you are not confused about nuisances, versus a trespass. Technically when we say nuisance, it is something that is suffered rather than it being executed or conducted. Trespassing is when someone unjustifiably intrudes onto your land.

A person that was accused and was convicted as a trespasser can face a penalty of around 4,000 dollars In some states though, fines come with jail sentences as well. This makes many people wonder if a drone flying over their house if tresspassince since it’s not on their property. Well, even though it is not technically on your property, and you do not own the air above your house, you do have air rights above your property. There is no data though about how high above your house you do own and regulations may vary. Nevertheless, taking photographs of how close a flying drone is to your house can be of help when bringing the problem to the police. They will be able to investigate and see if the drone was simply flying over your property, or if someone was actually recording or taking pictures of your house and breaking privacy laws.

Is flying a drone over someone’s house always invasion of privacy?

There are some incidents that have happened that prove drones are not the non-innocent unmanned aerial vehicle. There is potential damage to privacy when you are flying a drone. Drones can be very scary to some people as they can be equipped with HD cameras that might capture photos of you while taking a bath, using your bedroom, or even when doing intimate things with your loved ones.

So what do I do if someone is recording me with a drone? The first thing you should do, if you are sure that someone is recording you with a drone, is to contact the police. The police will investigate the drone as well as the owner to verify if they were taking pictures or recording. The police will then let you know what your next course of action will be. Most of the time, the person will be arrested for invasion of privacy. In court, you can request the judge to issue a temporary restraining order against the drone pilot or in some cases; the court may order the pilot to never fly within your property. When someone violates your right to privacy, you have every legal right to take them to court as well as have them arrested. You will want to make sure that your claims about the person flying the drone are true though as you do not want to call the police on someone who didn’t even realize they were breaking a law.

Related Post  Can I Fly A Remote Control Plane Anywhere?

When should I call local law enforcement?

Law enforcement agencies such as police officers use drones for certain activities such as traffic management, spying on suspects and surveillance for any emergencies. These are positive things a drone can be used for. However, in some cases, you can feel that all your rights have been violated and you are not sure what to do with drones hovering over your house. If there is a drone that is hovering over your house and you are not sure why it is there, you may call directly to the local law enforcement agency to come and investigate the area. At that time, the pilot will be contacted by the police, and will be spoken to about flying the drone over your property. If the issue continues, the police may take the owner of the drone to jail if needed.

Now that you know that a property owner has every right to everything above and below his property, you can see why drones hovering above your house is a big problem.  It is not uncommon for a drone to pass over someone’s house though. The only time it becomes an issue is if the operator of the drone is using the drone to invade the privacy of the homeowner, or if they are being a nuisance. According to the Federal Aviation Administration soon, there will be a total of 2.4 million registered drones in the US.

Even with all of these drones, you will still be able to have your privacy, and control over what happens on and above your property. So the next time that a drone is hovering over your house, you know exactly what you should and should not do.