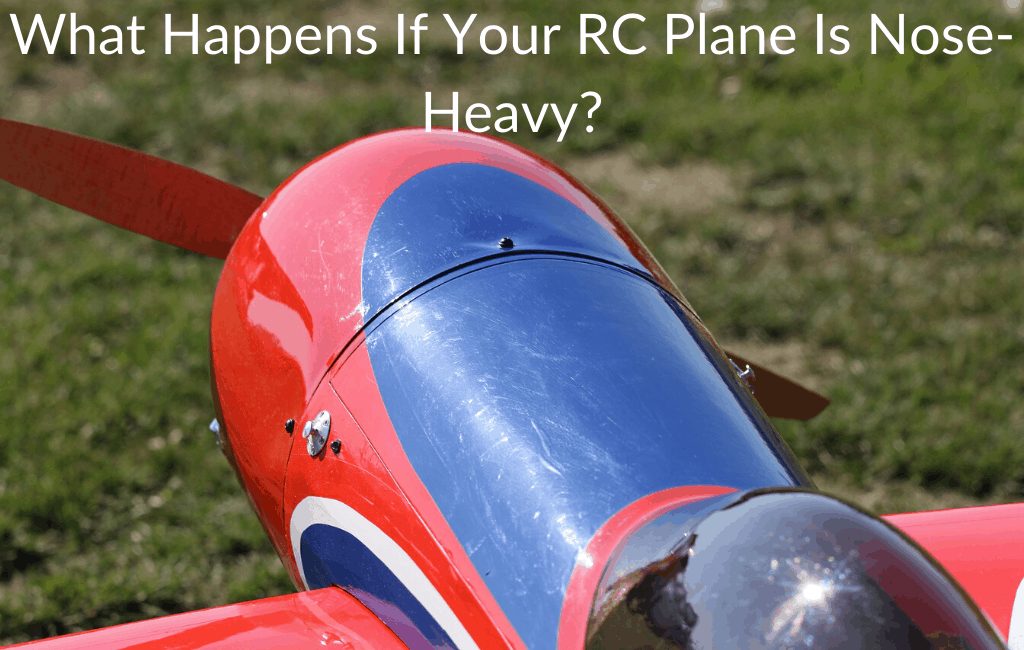 When a plane is nose heavy it will be much more difficult to control than a plane that has the proper center of gravity. The RC plane will also be quite sluggish in responding the controls as well as will be very difficult to fly level.

A nose-heavy RC plane has its center of gravity (CG) at its nose rather than its center. But what does this mean on the RC plane? Basically, it means your plane will not fly well, and this should be best avoided.

A center of gravity at the tail of the plane should also be avoided (tail heavy) as this will make it incredibly difficult to control the plane and if it is too tail heavy it can cause the plane to stall and crash.

,For any type of plane, the pilot must go through careful calculations to ensure that the position of his CG is not too far forward or backwards.

When the CG is too far forward, the nose will keep dropping, and the plane will be very sluggish to elevator control and will dive far too fast (which can result in a crash as well) While having the CG too far back is much more dangerous than having it too far forward, both should be avoided if at all possible.

Keeping your plane perfectly balanced to slightly nose-heavy will make it very stable and perfect for flying.

A nose-heavy RC plane could very quickly become uncontrollable especially if you are new to RC planes. Since the controls are sluggish and it will have a tendency to dive from being nose heavy it can easily result in your plane flying down then up, down then up, over and over again.

A tail-heavy plane will be very unstable the entire time you are flying it and it will move in odd ways making it very difficult to keep in the aire. If the pilot of a tail heavy plane doesn’t notice it until the plane is quite a ways in the air it can be incredibly difficult to bring it back down safely.

When a tail heavy RC plane stalls the pilot will normally lose complete control of the RC plane, and will rarely be able to do anything to pull it out of the dive since it will more than likely be falling out of control.

It is common for RC planes to be imbalanced and become nose-heavy, tail-heavy, or stall. but with skill, this situation can be expertly maneuvered by a good pilot or discovered before ever leaving the ground (which is always best).

With lots of practice, a pilot can enter and exit stalls with a high degree of control but you should always avoid the CG being too far back as it might never come out of a stall no matter what you do.

CG is primary to RC plane education as it could kill your fun and also end up with your plane lost or destroyed if you aren’t careful.

To learn how to properly balance your RC plane so it is neither nose heavy or tail heavy you can keep reading or you can also check out the video below to learn more.

How to Avoid an Imbalanced CG from Being Nose-Heavy

CG or Center of Gravity is critical in ensuring a safe flight with your RC plane. Manufacturers make sure to build their airplanes with a recommended CG. Usually, the CG has a +/- factor of 10 or fewer millimeters both fore or back of the CG mark. You can adjust your CG depending on your personal preference as some pilots will prefer to fly their airplanes a little nose-heavy while some will want the plane to be perfectly balanced.

Very few pilots will every want their plane to be tail heavy as a slight miscalculation can cause it too be too tail heavy and stall or crash.

All aircraft have a specific CG position; it’s the mean point where all gravitational forces act upon the plane and hence the point where the model balances fore-aft correctly. You can think of a plane’s CG like the center point of a see-saw, for example.

Most pilots tend to use their fingertips to balance their RC airplanes.

To do this, on the line of the CG — the specified distance back from the leading edge of the wing of the plane and a couple of inches out from the fuselage sides — place the tips of your index or middle fingers under each wing. And gently lift the plane up, so it is clear of any surface and let it hang freely on your fingers. Make sure the plane’s battery is in place, and the plane is ready to be flown.

A correctly balanced airplane, sitting on your fingertips, will either be level or have the nose pointing slightly downwards. If the tail points downwards, then the model is tail heavy, and you will want to correct that as most airplanes are less controllable and easier to crash when tail heavy.

Especially when starting out and going on your first few flights, you want to steer away from your model aircraft being tail heavy.

If your battery or receiver adjustment lacks room and can’t adjust the CG, adding weight to your plane will be a choice between the nose area or tail area, depending on where your CG is currently at. Never forget that adding weight should be the last step after trying other methods such as moving internal parts fore or aft first.

There are CG Balancers you can even buy to ensure an even more precise method to locate the CG. They are also known as a CG Machine; you can locate them at a variety of places online (such as Amazon here) or at many local hobby shops.

Related Post  How To Hang An RC Plane On The Wall

Make sure the balancer you buy supports your model’s weight and size as there are many different size CG Machines. As with anything you should also make sure to follow the instruction manual so you can be sure to use and balance your plane properly.

Balancing An RC Plane that Retracts

There is a big disagreement among RC pilots concerning RC planes that retract and what the best method is to ensure it is balanced. Some argue for gear down as the takeoff and landing is the most critical point of a flight when the plane is slower generally than in its usual flight. Nevertheless, RC planes with low wings are best balanced with their gear up as this is the normal position during flight.

Getting your RC plane into a good balance is not so much of a difficult task, although it is a task you will want to do right and not mess around with.

A well-balanced airplane will be much more stable and easier to fly than an RC airplane that is out of balance. There are a lot of bad things that can happen when your RC is excessively nose-heavy. From getting out of your control and plunging down steeply, your RC plane could crash and burn.

Balancing your RC plane is a delicate process but not one that is difficult to do. You simply have to take the time to do it properly before each flight (or after a large bump to the plane) to ensure your plane is balanced right everytime you take it up.

As you become more experienced with your RC plane you will often be able to tell if it is balanced or not by simply starting to take off as the controls will feel sluggish and the plane will not feel “normal” but for many people checking for the proper balance before each flight is still a better option.

link to Can You Use An RC Car On The Beach?

When playing with your RC car, you have probably realized that your yard is not big enough to race and have fun for a long time. This is because RC cars need open space to race with each other and a...

Continue Reading
link to Are Traxxas Batteries Worth It?

If you have recently purchased a Traxxas RC car you may have noticed that not all of them come with a battery. This allows you to choose the battery that you prefer over being forced to use the one...