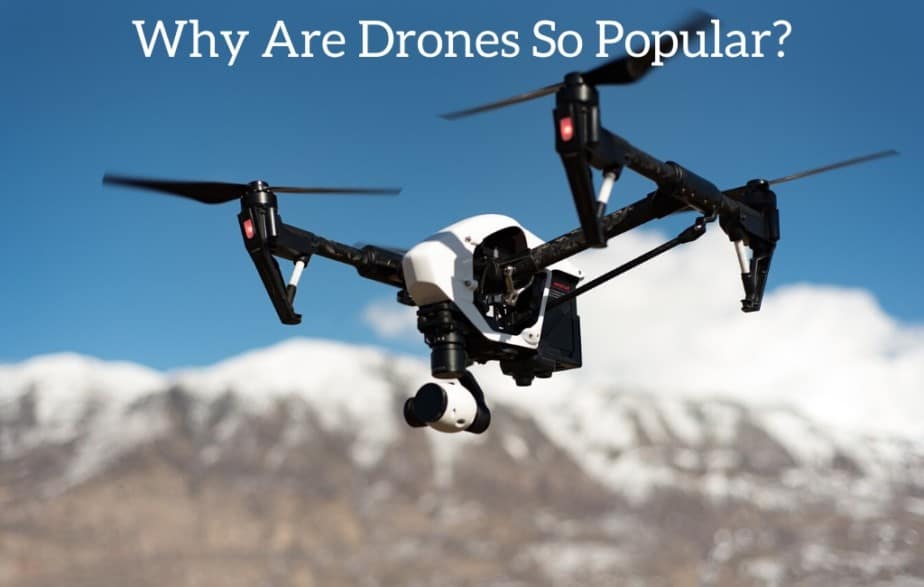 When I was a kid I would often get RC helicopters for gifts. Some were very small but no matter the size these helicopters were cheap and not well made. They always seemed to break after just a time or two of using them.

Drones are considerably better than those cheap helicopters. Drones can actually fly and are much easier to control. Even some of the cheaper drones come with a lot of features and are useful for a variety of things.

Just because drones are getting cheaper and can make great gifts doesn’t mean that is all that they are being used for. Nowadays drones are used in almost every sector for photoshoots, filming, firefighting, insurance inspections, and more!

Another thing that makes drones so popular is their pricing and how easy they are to fly. You don’t need any special skills to pilot a drone, you just need basic knowledge and a little practice to get started.

To understand the drone’s popularity and why drones have become so popular you need to know the different purposes that drones have.

There are a variety of different things that you can do with drones. Each one takes slightly different skills to learn how to do but none of them are difficult to do with a drone.

Nowadays drones are used to take pictures because drones cameras have become quite good. They are able to take clear and crisp pictures as well as good quality videos. Even the most basic drones can have high quality cameras so you don’t have to spend a fortune on an expensive drone to take pictures either.

Almost anyone can take pictures or record videos with drones.

Drones are used in farming and agriculture because aerial monitoring can provide you with in-depth crop performance analysis. Drones can also be used for spraying pesticides, to scare away crop-eating birds, and to perform other necessary jobs.

Many people believe that sooner or later drones will work alongside humans performing civil engineering, industrial duties and many more.

Drones are currently used in the construction industry for many different things, some of them are inspections, employee monitoring, surveying, and security.

Another popular drone use is finding its way into people’s lives. Many people like to race drones and drone racing or simply flying a drone for fun has become a popular hobby. Drone racing is almost like a video game race. You just need a flying machine that can do acrobatic movements and sudden turns and the skill of being able to pilot the fast moving drone through the obstacles and around corners.

Drones have a wide use of filming options available to them. With such innovative advances in UAV technology, like autonomous flights, drones have become much more popular for filming in recent years.

They are especially popular when filming sports where a traditional camera would have issues recording such as snowmobiling, snowboarding, dirt biking, etc. With the advancement of the following mode that allows drones to follow people around, catching live footage of these sports has become quite popular.

We already know helicopters have been used for firefighting but soon drones will take this place. If fire attacks in a narrow place then it’s tough for helicopters to see that place but drones can do it easily and also drones can go into rooms in houses to check for people without risking the lives of firefighters.

These are some of  the purposes of drones but it is certainly not all of them as drones are being used in more and more ways all of the time.

If you are interested in seeing more uses for drones be sure and check out the video below.

What are some specific drone uses?

Related Post  Why Do Drone Batteries Die So Fast?

People from different professions choose to use drones to help make their lives easier, but there are some problems with drones too. There are a lot of reasons that drones have become popular but drone use does not come without some risks as well.

Damages caused by drone usage continues to go up. The number of close encounters between airplanes and drones continues to grow and here in the United States, the FAA says it receives over a hundred new reports of this happening every month.

There have been sme rules put into place to help decrease these occurrences from happening but drones have become so popular so quickly that many drone owners don’t know what they are doing is wrong or they simply don’t care.

For instance, in the USA you can’t fly drones above 400 feet and within 5 miles of an airport but the problem is many operators either don’t know about these rules or they don’t take the time to check and see where they are at in relation to an air strip.

A small drone impacting an airplane engine would be unlikely to cause a crash, but it could easily cause the failure of that engine and millions of dollars of damage.

Windscreens and other components are vulnerable as well. Small drones are invisible to air traffic control and onboard radar which can make it impossible for pilots to avoid hitting them if the drone is in the wrong spot. Drones can be dangerous if anyone flies it without knowing the regulations and how to make sure they are following them.

You can overcome these problems by following FAA instructions.

Rules you need to know

Stay below the maximum allowable altitude: As a general rule from aviation authority, you can fry a drone below 400 feet or 121 meters in order to avoid conflict with aircraft like planes and helicopters. This rule is for the USA. It can vary from country to country. For example, in Canada you can fly a drone at a maximum height of 90 meters or 295 feet. It is always a good idea to check your country’s maximum flying height before you begin flying. It’s your responsibility to make sure that your drone stays within the safety limit.

Don’t fly over people: Flying drones over people is not allowed no matter if it is a group of people or a single person. This is because the drone could lose power and fall from the sky injuring someone.

Maintain a visual line of sight: Make sure that you can see your drone in plain sight at all times. It is a good idea to check your local weather and if there will be low level clouds or fog then avoid flying your drone on that day.

Fly in accordance with a set of community-based guidelines: Every city has its own guidelines for flying a drone. Like if your area is near to the airport then you might not be permitted to fly a drone as high as in other areas. So make sure to check with your local authority to observe and abide by those rules.

Drones have become quite popular because of the amount of uses that they have as well as how much fun they are to use. Drones can be used in a variety of different businesses or situations but it is important to know what the laws and regulations are for your drone before you even use it.

Take the time to learn the rules of drone usage before you take off so that way you can enjoy using your drone without having to worry about hurting yourself or someone else.

What is the future of drones? Drones have already become so popular but there are still many places around the globe that don’t allow them or where they are seriously restricted. Many people believe that in the future, drones will become so advanced that they will take over many of the jobs that people currently do such as delivery, sales, and many other things.

Drones could certainly make our lives a lot easier and as we become more accustomed to them they are likely to be used more and more. It wouldn’t be surprising to see local stores use them for grocery delivery or even pizza places start to use them to deliver your pizza in the future.

As technology continues to get better and drones are able to hold more and more weight and have longer flight times we will see them be used in more and more ways.