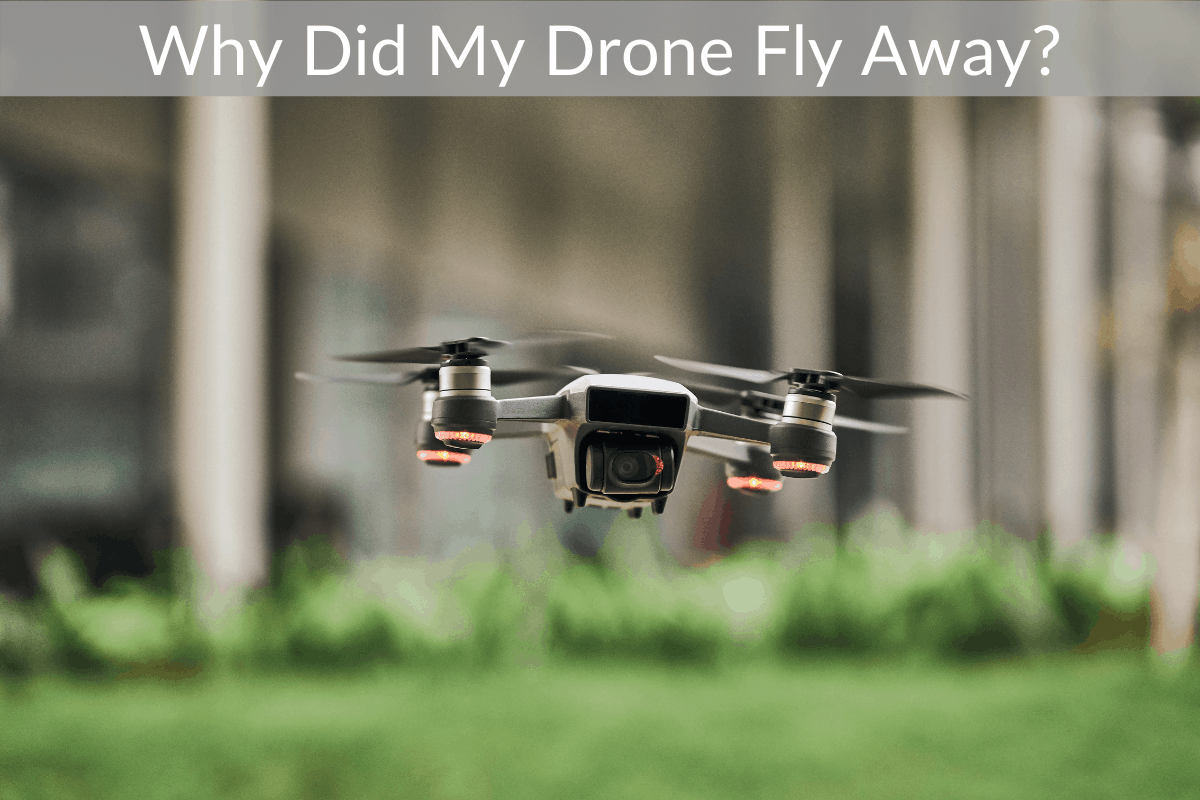 Have you ever been flying a drone and all of a sudden you didn’t have control over it and it just flew away from you? Maybe this has happened to the drone you are flying and you were only borrowing the drone. Well, in this article we will go over everything you need to know about your drone flying away.

So why did my drone fly away?

Although there are many reasons that your drone may fly away from you, the most common reason is because you have flown out of range and the home point auto return is on. This will tell the drone to automatically return home since you have flown it out of range.

If you want to check out our top drones that we love, you can see them by clicking here. If you want to know more about drones flying on their own, you will want to keep reading this article.

Drone flyaway is a condition where the drone has gone out of control of the flyer. This loss of control may lead to the crash of drones without any trace or the drone may be forced to land in some unknown location. A drone fly away may happen due to a lot of conditions that may either be internal, related to the working machinery of the drone or due to external factors like the environment and the handling inability of the person with the controller. Sometimes when a  drone flies away it will lead to a crash landing.  In addition to this causing loss to the owner, it can also lead to accidents. These drones fly away situations can be handled properly if the possible causes for such situations are known. Some of the major causes for a fly away are listed below; these situations should be avoided as much as possible, for prevention is way better than cure.

Most drones today have a home point return option. This will allow the drone to return to a predesigned location, once it flies out of range of the remote controller. It is a major help in retrieving the drones. The real problem arises in conditions of low power backup. The drones trying to execute the home point auto-return under a low battery power have higher chances of being shut down en route or getting crashed into other obstacles, thereby increasing the chances of being lost. Most modern drone manufacturers look over this point, but they are beginning to get better about adding a battery backup that will get it to its destination.

Another important reason for the drone flying away is just relying on the first-person view (FPV) instead of using the normal visual view along with the FPV. The usage of only the FPV causes the user to be ignorant of obstacles on the non-camera facing sides of the drones. It is always better to keep the drones within the direct visual range of the controller; in fact, it is illegal in some countries to fly the drones away from the visual range of the remote controller. Flying drones well away from the visual range greatly increases its probability of crashing.

One important cause for drones flying away is the failure to regularly calibrate the compass in the drones. The compass in the drone is a magnetometer which determines the direction in which the drone is flying, with respect to the electromagnetic fields of the earth. It has to be noted that there is a variation of electromagnetic fields at different parts of the world and hence there is a requirement of the constant calibration of compass.

Related Post  What Can You Do When You Think A Drone Is Hovering Over Your House?

The electric and cell phone towers

The user usually has very little control over this issue. The drones in flight can undergo hardware malfunction and this may result in their loss. There are some precautionary measures that can be taken, like flying the drone first at a low height and checking all the flight parameters. Once all the checkpoints are cleared they can be flown to a higher altitude thus reducing the chances of hardware failure.

The overuse or the misuse of lithium polymer batteries drastically reduces the lifespan of the battery and it’s charging capacity. This can be a possible cause of drones to fly away. The short battery life usually results in the mid-flight crash of drones.

Wind can play a major role in drones flying away. The wind conditions of every region vary and the person flying the drone should have a general understanding of the wind in the region and its variation with altitude. For example, the speed of wind in higher altitudes is usually stronger and the drones flying in that region have a more chance of being lost. Another important factor is the direction of the wind, whether it is opposite to the flight path or is it along the flight path. If it is against, then the drones have to expend a much more amount of energy and the battery backup shown won’t be the correct estimate for the calculated distance of the flight.

Temperature is another important factor that can cause drones to fly away. The temperatures in different areas are different and this can cause a variation in the air pressure. A person who is not trained properly to maneuver in various air pressure pockets can ultimately crash the drones. It is the same reason that a skilled person is required in flying the drones near seashores, where there are huge variations in air currents due to the drastic changes in temperature.

The change in the handling of a drone while it is mid flight from one person to another is another cause of drone fly away and crashes. This can be fixed by locking the drone at a specific height before handing the drone to the other person.

Flying too low or near obstacles like trees or the ground may interfere with the signal connection between the RC and the drone. This may cause the drone to lose control. It is always practical to keep the drone within the good signal range of the RC.

Sometimes the firmware update in the drone might be faulty, and it may give wrong information about the status and flight path of the drone. For example, an error in the battery sensing software may cause the drone to signal a low battery even if there was sufficient battery power and this might cause the shutdown of the drone during flight. This is where having a reliable drone and not getting a cheap one is a good idea.

Now that you know all the different reasons that the drone can fly away, you can see that there is no reason to worry about the drone. It is probably doing exactly as it was told to originally and simply returning “home”.