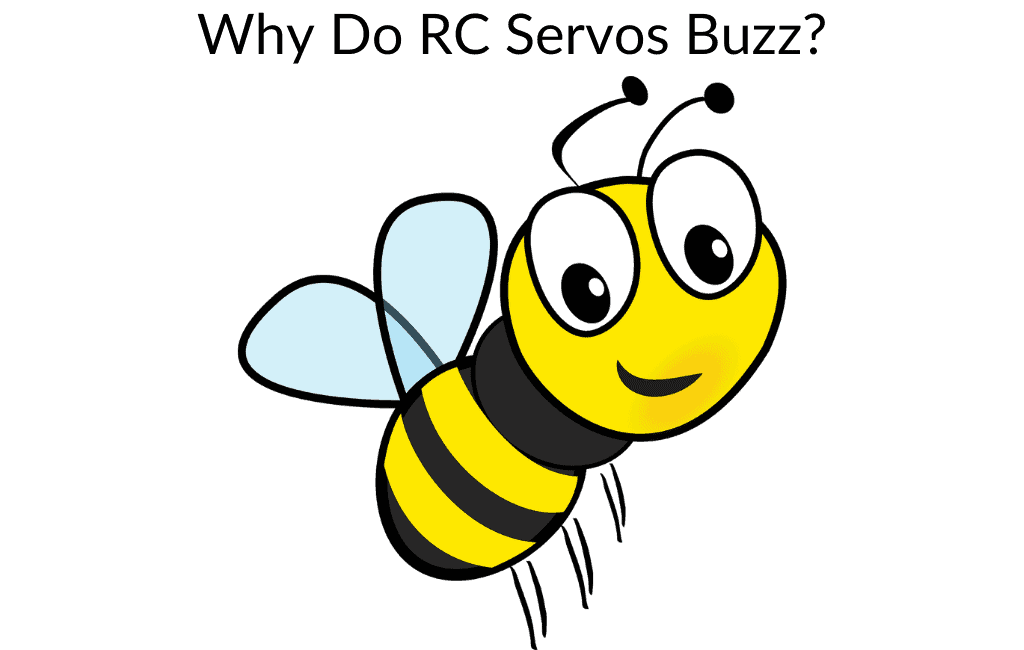 A common problem that people experience is their RC servos buzzing. If you have had an RC car for very long you have probably experienced it at least once if not even multiple times. When you hear that buzzing sound it can be quite concerning and you might even wonder if it means your RC car is defective or about to die.

Well if this is what you are worried about then this article is for you! We will try and answer all of your RC servo questions as well as give you some additional information about your RC car’s servo to help put your mind at ease.

When your RC’s servo is buzzing or chattering it is often because the linkage is stiff or out of alignment. It is normally a sign that something is causing the servo to work harder than it should, which if you don’t want to replace your servo should be solved.

This is by far one of the most common problems that people report having with their RC servos and also a problem that may or may not mean a bigger issue is coming. For example, some RC users have reported that they have had servos making the buzzing or chattering sound for a long time and it never caused any issues. Other people have said that they started hearing these noises right before something went wrong.

If your RC vehicle has had these sounds from when you first got it then it is likely that the servos are simply designed where they are a little more noisy. If however you have not had that sound before and you do now, then in that case it is probably a good idea to do some troubleshooting to ensure that there is nothing binding up the linkage or out of alignment that is causing the servo to have to work harder.

Before digging further into the problem as to why your servo might be making these chattering sounds, we should know more about what RC servos actually are.

In general an RC servos is simply a small version of a mass-produced servomotor. They are like other actuators which are used for small-scale robotics or for a variety of other radio controlled devices. These RC servos include the construction of a small electric motor that is responsible for driving the gears of your RC car. Also, you will find potentiometers connected to the RC servos’ output shafts. You will also find a closed-loop servomechanism in some simpler versions of electronics.

Before we look at more of why the buzzing happens or what you can do to fix it we will look a little bit deeper into how exactly an RC servo works. You can also check out the video below to learn more about servos.

How do RC servos operate?

The operation of these types of equipment is relatively easy to understand. The positioning of the output shaft of the motor is done with the help of a potentiometer. The potentiometer measures the distance which is then fed to the system for comparing the error between the commanded position and the actual position. Any kind of imbalance will result in an error signal and this signal shows the appropriate direction. This, in turn, commands the motor to either drive forward or backwards in order to bring the shaft to its original position. As soon as the RC servo reaches the desired position, the error starts to reduce gradually and finally becomes zero. At this point, the RC servo stops moving.

If for an example, the position of the servo changes on the command which can happen due to mechanical shift of the servo from its desired position, then, in that case, an error signal re-appears. The RC servo will again work in order to restore the output shaft to its desired position. In other words, RC servos always tend to position the shaft in such a position that can bring down the overall error signal to a zero value.

Related Post  How Long Does It Take To Charge A 7.2 Volt RC Battery?

It must be noted that nowadays most of the RC servos being used are proportional servos. The commanded position can be anything within the desired range of movement.

Usually, RC servos are used in those types of equipment where precise control is needed in order to position the shaft properly. The performance of these RC servos basically depends on the principles of a regular DC and AC motor. The only thing that differentiates these RC servos from the other motors is that the former comes pre-equipped with a positioning device. This positioning device is expected to provide the desired feedback in order to enable the whole closed-loop system control.

Therefore, if you want to do proper maintenance on RC servos, then you must be well-acquainted to its basic issues. Only by studying the cause, can you work towards solving it.

Now to the main point of the article. When your RC servos start to buzz you will obviously want to know what you should do about it. Should you leave it and hope for the best? Should you replace your servo immediately? What should you do?

Unfortunately when it comes to the buzzing sound that your RC servo is producing the answer isn’t always the same. Sometimes it is a sign that the servo is hanging up for one reason or another. Other times it simply is the way that the servo is built and that servo will make that noise the entire time that you use it.

Some people have even reported that they get the servo buzzing noise to go away by taking the controller further away from the device or even by simply extending the antenna on the controller! Since there are so many possible reasons why this could be happening that also means that the possible ways to fix it vary as well.

Related Post  How Do RC Bikes/Motorcycles Stay Upright And Balanced?

The first thing to check is that there is nothing in or near the servo that is causing it to not be able to move or function like it should. Barring that your next best option is to just leave it. Yes, it can be quite annoying if you are in close proximity to your RC car but if there is nothing causing the servo to not be able to work properly then leaving it until it dies or decreases the function of the vehicle substantially is your best course of action.

If you often use your RC car in close quarters such as inside a building then the constant buzzing sound would get annoying quite quickly so at that point replacing the servo with a new one might be better than constantly being annoyed with the hobby that is supposed to help you relax.

Depending on exactly which type of servo your RC car uses will determine the exact prices but you can often find them online on places like Amazon (by clicking here) or in your local hobby shop for quite reasonable prices. The servo is an important part of the vehicle but it is far from being the most expensive part!

Simply replacing the servo with a new one might be the fix that you need to solve the buzzing problem.

You will of course want to make sure that you know which servo it is that is causing the buzzing and that can be easily determined by feeling the servo for the vibrations.

The most common reason that RC servos buzz is because there is something causing them to bind up such an issue with the linkage or even some of the gears going bad. Since servos are relatively inexpensive parts if you have checked everything that you know how to and still can’t get the buzzing to stop then it is likely best for you to simply keep running it until it dies.

Once the servo stops functioning entirely then simply replace it with a new one that hopefully won’t buzz as well.