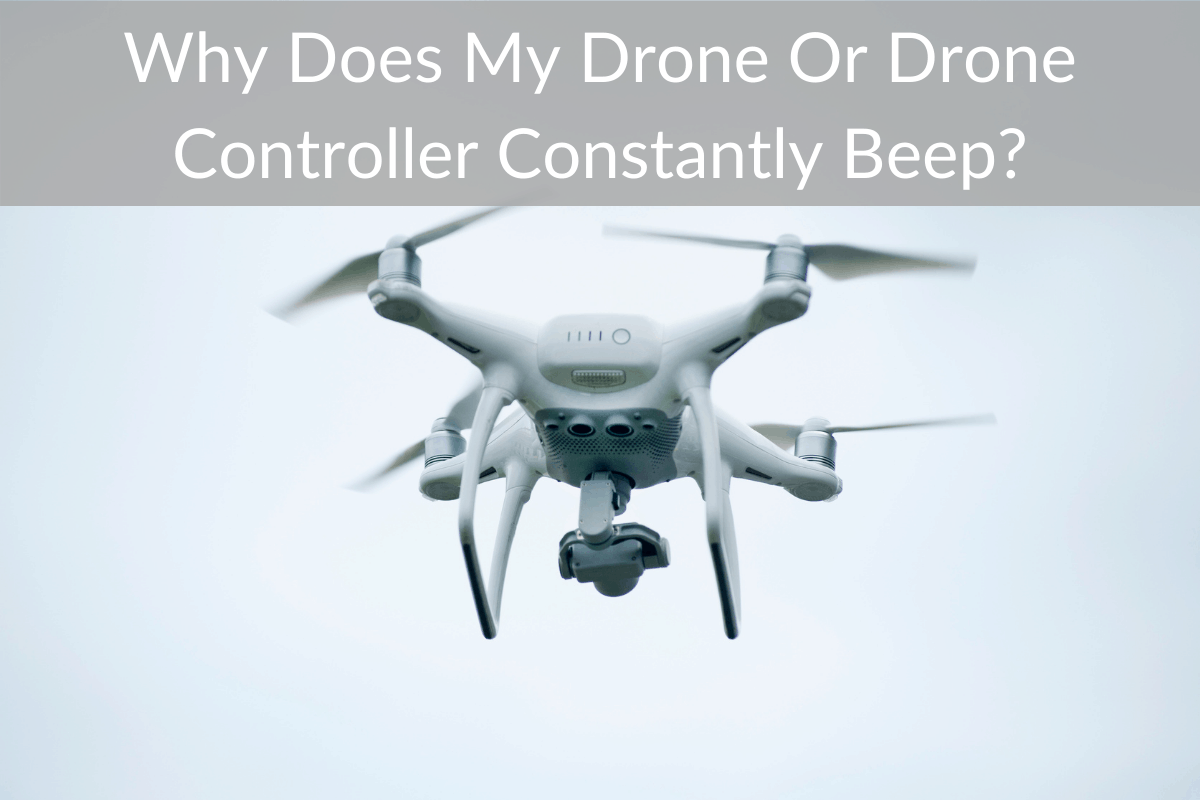 Have you ever been trying to use your drone, but have had problems with the drone or controller beeping? Maybe you are just starting off with your first drone, and you are not sure what the beeping means. Well, in this article we will go over everything you need to know about your drone or drone controller beeping and what it means.

So why does my drone or drone controller constantly beep?

Although many people do not know what causes this beeping, it actually may be caused by the battery, transmitter, firmware, stick alignment, and possibly many other issues.

To fix these issues and determine what your issues are, you will want to keep reading this article.

If you want to see some of the best drones currently available on the market you can find them by clicking here.

Most drone users forget this very important matter about drones. Knowingly, the firmware is the heart of your drone. This controls everything from flying inputs to the landing mechanism. This is why you need to update your firmware every now and then. Aside from a beeping sound, it can also cause the interruption of drone flight. This is why it is so important to have an updated firmware. This ensures that the operation of your drones is all in a safe condition.

Some drones have strict systems to the point that if you haven’t updated the firmware it hinders the drone from flying. It is important to update firmware also to fix bugs in terms of flight stability algorithms and battery management. Failure in doing this can make your drone fall from a flight. This is something that no one wants to ever happen to their drone!

This beeping might be caused by a low battery alert. Most drones give alerts through a notification that it has a low battery. When this happens, most drones give you an alert at 2 minutes and start to beep after 30 seconds. At that point, the drone may begin to fall. Drones that lose power while in a flight is the responsibility of the drone pilot. This is why if you are a responsible drone pilot, you need to make sure that the battery is fully charged.

Related Post  Can You Fly RC Planes in Parks?

Most drone crashes happen due to the battery dying mid flight. This happens when the battery is low and the drone is still flying. Once the battery dies, it will crash into the ground. Another fact is that not all remote control’s screen displays are accurate. As a drone pilot, you have to precisely estimate the flight time of your drone.

This may also be the reason for the beeping of your drone or controller. You have to make sure that your drone transmitter is set to mode 1 or in manual mode. As well as making sure that the Return-To-Home button is not pressed. What might be the problem? It might be possible that the drone and transmitter are not paired well. So no matter how good your transmitter is for as long as they are not paired well then the drone will not react to any order given through the transmitter. If this happens, you can just bind them together and turn them off and then On again. If there is no beeping of no lights abnormally flashing then they are now connected.

Another problem that may come up is that the battery power of the transmitter is not enough to sustain flight. The signal that the transmitter is releasing becomes weak until to the point that the drone cannot receive the command anymore. To solve this problem, you can simply land your drone and change the batteries of your transmitter. If that is not the case, then probably you are in an environment not suitable for drone flying.

Related Post  RC Helicopter Wobbles While Hovering? Here’s What to Do

For instance, flying drones with so many obstacles like buildings, towers, and big trees, hinders the signal from the transmitter to the drone. There might be a delay in the transmission of command and execution of the command. As a result, your drone could easily crash and you’ll regret flying in a problematic area.

This is one of the most popular beeping issues for drones. It is when you accidentally drop the remote control. Drone pilots who are just starting off or even professionals cannot deny the fact that sometimes we tend to be clumsy to a point that remote controllers can be dropped. Once they are dropped, even at a low height it can give an error code that results in the beeping. To solve such a problem, you will need to calibrate your remote control. By calibrating your remote control this usually resolves the error. However, if unfortunately you have dropped it from a height that is just enough to break it, then there is a possibility that it cannot be fixed.

To calibrate a drone, you need to turn on the remote control and connect it to a PC, tablet or phone. When the remote control is already on then click the icon for the app that you are using. Next you will need to click calibrate. A pop-up instruction will appear. From here on, all you have to do is to just read it then click “ok” for most cases. Once this is done, you just simply have to let the app calibrate the controller.

This issue happens when either stick (left or right) is not at the midpoint or out of alignment. To solve this problem, you also need to calibrate the remote control so it will stop beeping. Calibration is also the same with calibrating remote control to solve issues when the remote controller has been dropped. In proper navigation in the app, you will see two diagrams of the sticks and dial. On a calibrated remote control, it should say 0%. Even though it says 0%, there is still a need to recalibrate it just to avoid further issues. However, if it is above 0% then an immediate calibration must be done.

To calibrate the controller, you will probably be asked to move the stick at the center. At this point, a prompt will appear again and will ask to move your stick in its maximum limit to all directions repeatedly. Next there will be another prompt saying finish. Now, you may turn off and then on your remote control and try to check if the issue has been solved.

This issue is not uncommon for all drone users. Most tactile buttons work good because it only works when the button is being pressed. As time will go by though, these buttons will get old and may begin to not work all the time. This is inevitable. It is prone to such a problem due to its age. If your button is stuck, it might also be a result of trapped dirt in between these buttons. This is why cleaning your remote and all of your buttons is such a good idea. If it is not dirt then you can just simply unstick the button without causing any problem with neighboring buttons.

These are just possible issues that cause the beeping sound of your drone or your remote controller. What is best is that you know your drone, and how it operates. Knowing your drone can make troubleshooting it easier. Aside from these problems, drones’ GPS may also be blocked and cause decreased battery life. Now that you know the most common problems and how to fix them, you can use your drone and never have to worry about the beeping again!