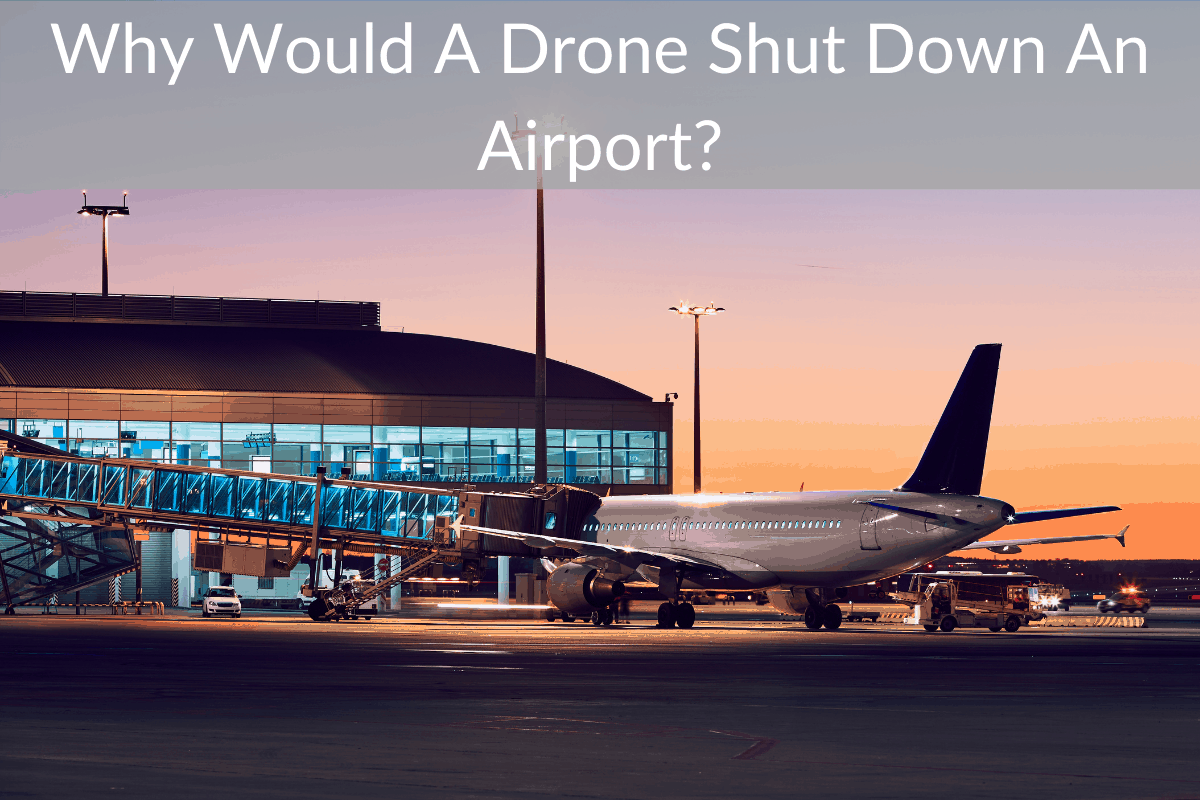 According to the statistics, there are over 1.3 million drones registered up to date with the Federal AviationAdministration. This is an exponential increase since the law to register drones was voted for in 2016. This number only shows how these flying machines are starting to pose a real serious threat to the aircraft industry.

There are magnificent uses of drones such as agriculture, movie making, police patrolling and other modern applications. This doesn’t eliminate the dangers of the use of these flying machines even when used as a hobby. In this article we will go over everything you need to know about drones shutting down airports and how it happened.

So why would a drone shut down an airport?

Although this does not happen very often a drone can shut down an airport if it is flying in the restricted area. The airport will shut down as these drones can carry explosives and cause a real threat.

If you want to know more about drones shutting down airports, you will want to keep reading this article. You can also check out this short video to learn about where you can fly a drone without getting in trouble. You can check out our favorite drones that we love to fly by clicking here.

What was the biggest drone related shutdown?

The biggest shutdown that a drone has had on an airport There have been more than 140,000 economic and business passengers delayed in one drone-related incident alone. The topic is broad and debatable. But these numbers are there to illustrate why a drone would shut down a whole airport system for days.

Related Post  Are RC Planes Hard to Fly: A Guide for Complete Beginners

What caused people to notice drones shutting down airports?

The incident that brought this problem to the world’s attention was the Gatwick airport drone incident. This tragic experience affected especially the passengers who were in a hurry for Christmas season dates between December 19th and the 21st of 2008.

Drones in 2010 affected 1000 flights and was the biggest disruption since the Icelandic volcano. That volcano shut down the airport in 2010. This was not a terrorist attack, and two suspects were even arrested by the Sussex police. Since drones were new and not regulated yet, the suspects were later released without charges.

Later on, the military also got involved to shut down the drones that were disrupting the runway. The estimated cost of this incident was $64 million which caused Gatwick to spent $6 million to prevent the same future incidents. There have been reported more drones shutting down airports in Heathrow, Newark, Dubai, and Dublin.

The threats of a drone to an aircraft

Drones pose two main threats to a manned aircraft. Since the drones are piloted remotely from meters away, they use radio signaling for very good control. These radio signals can cause interference with the signals of manned aircrafts. This alone can cause the pilot to lose control of the airplane, and may cause a crash.

Another bigger threat is that these drones can be equivalent to a bird hit. If this happens, the drone would hit the aircraft, and may fly into the engine making the plane crash. This is also a hazard risk because drones have the capacity to carry explosives.. Many reporters have quoted that the growth in drone use coincided with an increase in the rate of near-misses between drones and aircrafts.

This is why when a drone is spotted around an airport’s runway all flightsare immediately grounded. This is for the passenger’s security, as well as the security of the airlines. A good number of pilots have requested a close study of the real impacts of a drone hit on an airplane. Usually, these tests are done with birds by manufacturers and the costs are exponential to do the same with drones.

Related Post  What Happens If Your RC Plane Is Nose-Heavy?

The threats of a drone to the airport system

The real threat that these drones attacks pose to airport systems is generally cost-related. As the statistics from incidents have shown, a 30 minutes disruption of an international airport can cause loss of tens of thousands of dollars. These new kinds of attacks vary from drones hovering around the airport’s runway, to near-miss between manned aircraft and drones.

Another issue is that the sightings sometimes are false information. It would be inefficient if the sight of a hovering balloon reported by a well-meaning person caused an airport shutdown. This means that in the future airports should be equipped with accurate protocols to spot and respond to drone sightings around their perimeter.

The measures to counter illegal airport disruption by drones

This is a highly debated topic so we know the efficient approach to try and stop the drones from flying over airports. Studies are trying to introduce a so-called sky fence. This is essentially a system that blocks the radio signals when drones are detected. Once the signal is blocked, it will cause the remote pilot to lose control of the drone. This system is normally ineffective in airports since the airport systems work using radio signals.

Another approach taken was geo-fencing restrictions. This is a GPS powered system implemented by major drone manufacturers such as DJI. DJI has restricted zones which the drone will not even fly into when you purchase a drone. This means in general that the operator cannot fly over areas such as airports, sports venues, and prisons.

The hobbyist today have a great percentage of ownership of these machines. Model aircraft organizations have implemented a set of rules that these hobbyists have to abide by for the safety of the public. These include but are not limited to flying their drones below 400 feet and out of the airspace for passenger airplanes.

So far the drones’ dangers vary from radio frequency disruptions to smuggling drugs. As drone usage grows though, as a prediction with statistics, more threats are going to rise as the use of drones becomes much more popular. This is because  the magority of people that use drones have no idea what they are doing or where they are flying, and are just using the drones for fun.

Using a done over stadiums, airports, jails, and even some hospitals and police stations are highly prohibited. Flying a drone near or around an airport has many dangers. That is because airports as well as these other locations are government related authority airspace, and are not to be used by the public. This is not only for the safety of the people in these areas, but for the safety of the people around them.

The drone pilots community should also take charge and make sure these threats are taken into consideration by even the hobbyist pilots. This should be done through the various means of modern communication. The future is in our hands, so we should make sure this marvelous technology doesn’t get spoiled.

Now that you know all about drones and where you can and cannot fly you can see why it is so important to know these rules. The last thing anyone wants is to shut down  and enjoy the many doors it opened for human civilization.