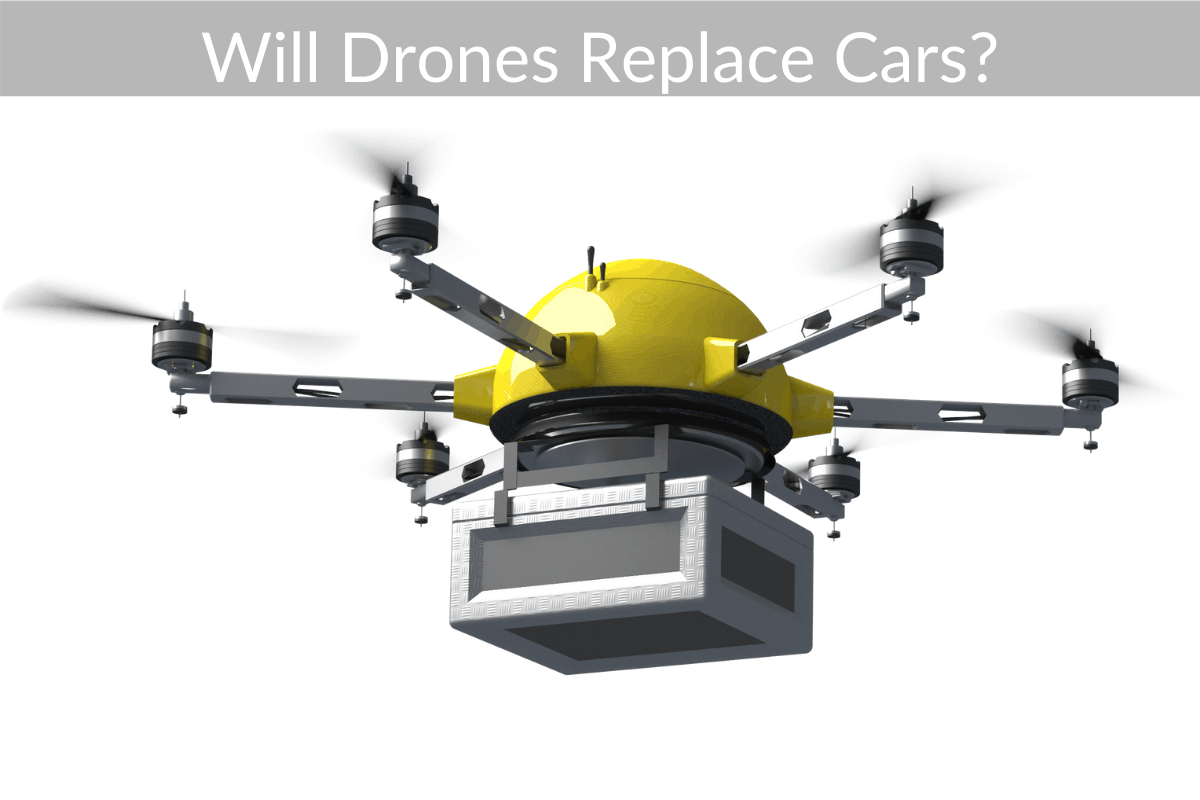 Since the 1920’s people have been dreaming about personalized air transportation. Fighter pilot E.V. Rickenbacker in the 1924 issue of journal “Ace of Aces” has told that the people should expect the flying cars by the year 1944. It has been many decades since the prediction and still, we have cars which are bound to the land, but the idea of flying cars still dominates our imaginations about the future.

With the new age of drones and being able to carry packages and heavy items, many people are wondering if instead of cars, drones will simply take us from place to place. Well, in this article we will go over everything you need to know about drones and them replacing cars.

So will drones replace cars?

If you want to know more about drones and cars, you will want to keep reading this article. If you want to find some of the best drones currently available you can just click here.

William Henson, in the year 1852 had filed for a patent for aerial type steam carriage, this might well be one of the first-ever documentation of the humans to conquer the skies personally. It still took about 60 years after this for the first flight to be performed by the Wright Brothers. In the 1920s Henry Ford had the idea of creating cars that will fly. He expressed his idea to his friends and they laughed at his idea. “You might laugh now,” he said, “but it will be a reality in the future”.

The explosive growth in technology might be an indication that the future Henry Ford dreamt about, may have arrived. Only with a plot twist, instead of flying cars, the future might welcome us with driverless cars.

The concept of flying cars had a lot of issues in itself. Imagine drivers with a license experience of flying cars for 40 hours at least. The driverless car removes these problems. Many start-ups and big companies are investing in this driverless drone technology. These drones can alter the way we travel.

Air space is not a static area

This is a major reason to consider the possibility of traveling drones. The roads and bridges and other land travel routes are designed to be static and for cars. We can only move in designated directions. This is not the case for drones. We can specifically design low altitude airspace for the movement of drones which doesn’t necessarily need a fixed route direction.

Companies like Google and Tesla are investing heavily in driverless technologies for road travel, and they have made monstrous progress in this field. Elon Musk, CEO of tesla motors had recently announced that the newest model of tesla cars has enough computing powers to allow the maneuvering of these cars in the absence of a driver.

The truth is that the technological advancements in the driverless car arena can be utilized in the passenger drones area, with a much more positive outcome. The drones basically wouldn’t have to come across as many obstacles as a car does. This is because right now the air has no obstacles like the ground does with houses and hills and so on.

Cars normally travel essentially in a 2 dimension manner, forward or backward, left or right. This is not

the case for driverless drones. They can travel in any direction, up, down or sideways. This gives a much more maneuvering capability compared to that of the normal road cars. Traffic will be a story of the past. This is because there is for more available air space to drive than there is land space. Also once drone travel becomes popular and the airspace begins to get crowded, you simply add a new layer of travel in the air.

Related Post  RC Helicopter Channels 101: What They Are and How They Work

An Open Platform For Development

The traditional road transport system is more or less saturated and there is very little space for innovation. Most of the big brands have already made names in the automotive industry and they don’t provide space for the growth of other newcomers. The aerial drone travel is a less explored area and there is space for a lot of innovation and progress which can be made by even new startup companies.

It has been predicted that by the year 2050 the unmanned aerial transport might become a 1.5 trillion dollar industry due to the investments pouring into this area. It has been already noticed the growth that can be achieved with open and new platforms, as it happened in the case of the internet. The drone industry can provide a platform for the successful corporation between the hardware and software developers in pushing the air travel dreams to other levels.

If we think that personalized drones are the future, we might be on the wrong side of the card. It will probably be very costly to manufacture a flying passenger drone and not everyone can bet on having a personalized drone parked in the garage. We could bet on the ultra-rich to own some though. The majority of the people, on the other hand, will have to bet on ride-sharing services and other taxi services like Uber to experience the driverless flight. Uber is planning to launch its air taxi services within 10 years. For this to happen, they have to depend on other third party designers who can design and will produce the required drones for them.

Hopefully, in the future, we would just have to book the drones in our apps and these drones will come to pick us up. Not only would this save time by not having to wait in traffic, but it would also save money as the drone would be able to complete more pickups and drops offs than a person in a car. This is simply because the drone will be able to take a straight line to your destination and a car will have to follow roads.

Hurdles With Drones In The Future.

We might have to cross some hardships to make the passenger drones a reality. The very first issue is the one of the battery. Most of the new prototypes that are being created use electric propulsion for flight and this drains the battery drastically. The current air travel time achieved by the most efficient prototype of travel drones is only just over 20 minutes. Research is still going on to achieve more powerful and lightweight batteries which can power the flight distance though. If this happens, it will not only make electric cars a lot better, but would allow the invention of drones that can fly humans.

Another important point is with the regulatory authorities, who have to control the matters of safety. In the US, the Federal Aviation Administration (FAA) controls the progress in the development of air travel drones. They have to be fast in introducing new regulations with the increasing technological advancements. They have to create policies and laws to decide how these drones will function in the newly formed air traveling spaces, once they are created. This will have to be done to ensure everyone’s safety, as well as to make sure these drones cannot be hacked.

Now that we know it is a possibility for Jones to eventually replace cars we can understand why this is something many people are investing money into. The problem is because air travel is so highly regulated it may not be something that will happen anytime soon as opposed to driverless cars.