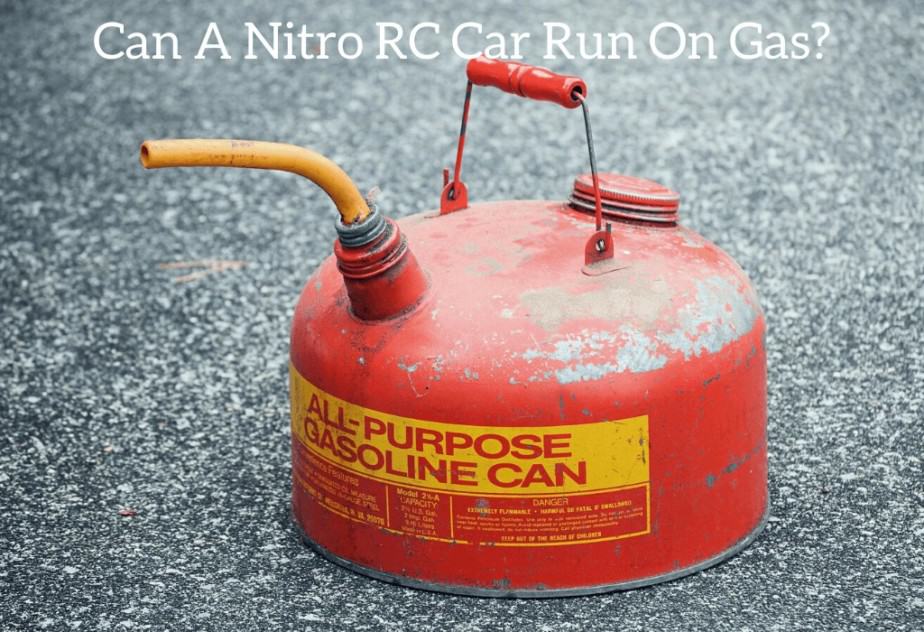 As you begin to dabble in the hobby and joy of RC (radio-control) vehicles and vessels, you might grow curious as to whether your RC car is really so different than that of your own motor vehicle. One question you might have is whether a nitro RC car can run on regular gasoline (the kind used for real cars.)

So can a Nitro RC car run on gas? It depends on the circumstances. If you are attempting to put regular gasoline in a non-altered nitro RC car engine, then-No it won’t work properly. It will damage the engine. However, if you are retrofitting the car to run on gas, then it can run on regular fuel although maybe not at its highest potential.

If RC cars ran better on regular gasoline, they would be manufactured to use regular fuel. However, there is a reason Nitro engines are used in RC cars. To begin, it’s helpful to understand the difference between how a nitro engine functions and how a gas engine functions.

What is a Nitro Engine?

A nitro engine is an engine powered by fuel that contains part nitromethane, mixed with methanol. The percentages vary depending on your vehicle. Nitromethane is a super combustible liquid that is generally only found in specific engines, like those used in vehicle drag racing, or miniature engines like that of a radio control (RC) car, or free flight model airplane.

Nitro is the shortened ‘slang’ for nitromethane used to describe these types of engines and is often heard as a marketing ploy or way to hype up a type of car or vehicle. Prior to being referred to as “nitro” engines, they used to be referred to as “glow engines.”

Glow engines are actually fueled by methanol. The methanol is souped up with nitromethane to aid the performance and speed of a vehicle or vessel. The reason these types of engines were referred to as ‘glow engines’ is because the ignition system has a glow plug, which is a coil made of a platinum wire blend (often a mix of platinum-iridium).

The glow plug is heated via an electrical current, which gets things started. The residual heat and the catalytic action from the platinum alloy then mix with the fuel mixture and ignite the engine.

What is a Gas Engine?

In an internal combustion engine, the high-temps and high-pressures caused by the combustion chamber, send a force of energy to some component of the engine. That force is then applied to pistons, turbines, or a rotor. This force moves the component, turning chemical energy into mechanical energy.

The Clear Difference Between Nitro Engines and Gas Engines

To start, a nitro engine obviously runs on a nitromethane fuel mixture, which is alcohol-based (most common nitro fuel mixes are: 18% castor oil, 10% nitromethane, 72% methanol). On the other hand, a gas engine runs on regular gas, though even a gasoline engine requires oil. Another big difference between the engines is that gas engines have ignition systems, whereas nitro engines just have the glow plug.

For this reason, gasoline engines are also heavier than nitro engines – which is another reason one would prefer to have a nitro engine in an RC car. The lighter the car is, the better it will handle and the faster it can go.

Gasoline also has a significantly larger number of BTUs per unit of mass fuel than nitromethane as well. A BTU (British Thermal Unit) is defined as the amount of heat required to raise the temperature of one pound of water or liquid by one degree Fahrenheit. In other words, gasoline is more explosive than nitromethane.

A nitro engine is also smaller than a gasoline engine. For this reason alone, it makes sense more RC cars run on nitro than gas. Additionally, since gas runs hotter than nitromethane, nitro engines require less surface area because nitro engines don’t need as many cooling fans since nitro fuel is alcohol-based and pulls heat away from the engine.

So Why Won’t Gasoline Work in a Nitro Engine?

Firstly, nitromethane and gasoline are entirely different fuels that are not interchangeable. If they were, there would be no need to differentiate the difference between a nitro engine and a gas engine. They would just be called “fuel engines.”

As I mentioned above, gasoline holds a higher number of BTU’s per unit than nitromethane. This is important because the Nitro engine is frail in comparison to that of a gasoline engine. Putting gasoline in a nitro engine will destroy the engine as it will conduct more heat than the nitro engine is capable of withstanding. The gas will not cool the engine down properly like methanol does.

If you’d like to see a real-time example of what happens to a nitro engine RC car when gasoline (petrol) is poured into it, you can watch the video below

But What if I Really, Really Want my RC Car to Run on Gas instead of Nitro??

If you are really passionate about running your small radio-control vehicle on gasoline instead of nitro for some reason…you can tear apart the engine and put a small gas engine in its place (if the RC car is even big enough to accommodate a small gasoline engine).

However, it is much simpler and much more cost-effective to purchase a true gas fueled RC car.  When you go to buy an RC car – many non-electric RC vehicles will state that they are gas run. This often means ‘nitro’ fuel vs. actual gasoline. So be sure to read the specs on the back of the box and in the user ratings to discern which type of gas the vehicle runs on. While most RC cars run on nitro, you can find some that will run on gasoline. They are powered by spark plugs and operate much like gas-powered cars.

Related Post  Losi VS. Traxxas VS. Arrma, Which One Is Better?

A true gas-powered RC (or even a diesel fuel RC) is typically for someone who is quite  familiar with RC cars for quite some time. I would not recommend pure gas-powered RC cars to the novice. There’s just no need for it.

If you’re looking to purchase a new gasoline-powered RC car, vs. retrofitting a nitro engine to become a gasoline engine, below is an excellent, top-rated gas-powered RC truck:

The Key Take Away?

Additionally, if your heart is set on using an RC car run on gasoline, there are RC cars, trucks and even airplane models out there that you can buy that are designed to run on regular gasoline. For most people it is better just to stay with a normal Nitro powered RC car. They run perfectly great, are lighter and easier to operate, and will be less expensive.

Whatever your choice is it is important to use the fuel that your vehicle is designed to use. That is the best way to ensure your RC engine lasts as long as possible and isn’t ruined because you put the wrong fuel in it.