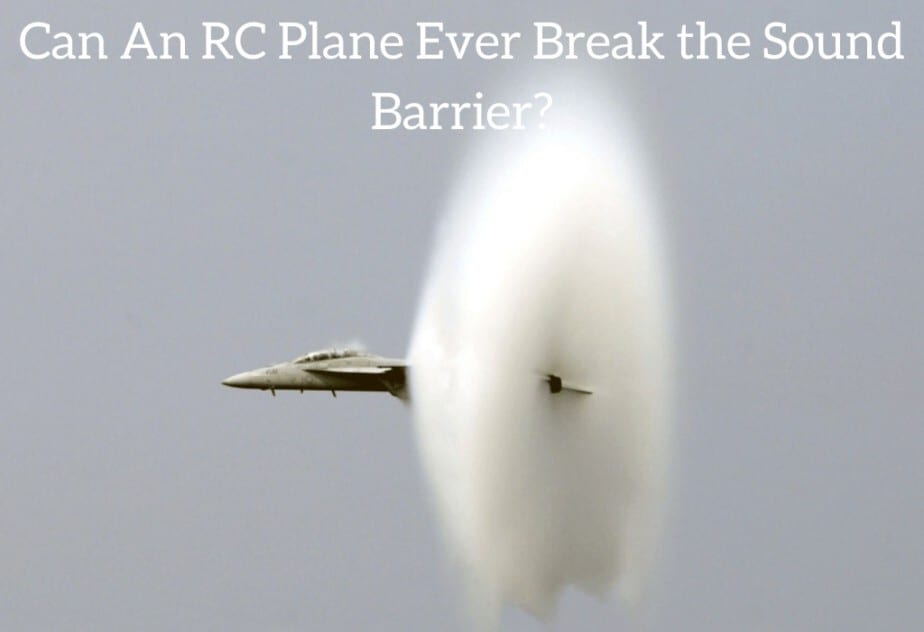 RC planes, or radio-controlled aircraft, are small planes that are controlled by small radio transmitters on the ground by an operator. They are a popular hobby among plane enthusiasts and their overall performance and metrics have improved substantially in recent years with advancements in technology. But are these planes as fast as the speed of sound?

Can an RC plane ever break the sound barrier? There have been no reports of an RC plane breaking the sound barrier to date, and this would require continued improvements and enhancements to these aircrafts and their capabilities. The combination of increased performance and ideal weather conditions could allow for it in the future.

We are going to look at the fastest RC planes ever and the conditions that need to be met in order to break the sound barrier. Currently, these planes would need to increase their speed by a couple hundred miles per hour to achieve this impressive feat. While it has never happened, understanding the necessary requirements could allow it in the future.

To see some of the best selling RC planes on the market right now just click here.

The Fastest RC Planes Ever

There are a variety of RC plane designs that one can choose from when flying their small aircraft. Some are designed for speed and to be more aerodynamic, which is what an RC plane hoping to break the sound barrier or reach incredibly high speeds with require. While there haven’t been any planes to do this successfully yet, these small planes can reach higher speeds than most people would expect.

According to The Drive, the fastest recorded RC plane, known as the “Inferno,” traveled over 465 miles per hour, which was accomplished with a powerful Behotec 180 turbine jet engine and weighs under 17 pounds at just over a foot in length. This plane was operated by a German airplane pilot. You can check out a video of it traveling at 451 miles per hour in 2017 in the video below.

Most RC planes do not travel nearly this fast as they require very powerful jet engines that many people do not have the experience to operate or the wherewithal to purchase them. Depending on the type of RC plane you have, some of the faster planes will reach upwards of 100 miles per hour. Planes that are reaching high speeds like the ones above are very specialized and will require a lot of practice to learn how to control them without damaging the plane or hurting someone in the process.

Controlling any vehicle that is going 100mph is difficult but that is especially true when you aren’t even piloting the plane from inside it. Using a remote with an airplane going incredibly fast takes a lot of practice and skill.

While 465 miles per hour is incredibly fast for a plane of its size, it currently is fairly far off from breaking the sound barrier. This is the closest any plane of this size and caliber has come to reaching these standards. Let’s look more closely at what is required to break this barrier.

The sound barrier is the substantial increase in aerodynamic drag that can be broken by an aircraft at incredibly high speeds in certain flying conditions. This occurs when a plane is able to reach a high enough speed to meet and exceed the speed of sound. This high speed can impact the quality of the flight and make the aircraft much more difficult to control.

There are a few factors that must be considered in order for an aircraft to break the sound barrier:

Related Post  Can The Mavic Mini Fly In The Rain?

Breaking the sound barrier at the 767 miles per hour is in typical conditions where the air is around 70 degrees Fahrenheit and at sea level. When the temperature drops, the speed of sound will also decrease and allow for the barrier to be broken at lower speeds. Molecules in the air and sound will move slower in colder weather, decreasing the miles per hour required.

The aircrafts that have been able to break the sound barrier are much larger than model planes like those that are radio-controlled. Many of these planes are used in military and scientific research applications. According to Hartzell Propeller, the sound barrier was broken for the first time in 1947, which was accomplished by a rocket. Propeller aircraft can reach these speeds with major modifications.

Will RC Planes Ever Break the Sound Barrier?

Most RC planes rely on propellers to fly, making them slower than the requirements for breaking the sound barrier. Even the plane that reached 465 miles per hour because it replaced propellers with a jet engine couldn’t reach these speeds. It will take ideal flying conditions and much more powerful engines and body design in order to break the sound barrier.

This will require greater financial investments in RC planes for the technology to develop and time and energy from users like the German team who wanted to build a better and faster RC plane. Given the current state of RC planes and the advancements that have been made so far, it is unlikely that RC planes will break the sound barrier anytime soon.

This doesn’t mean that they won’t in the future, but it will require significant advances in technology in order to achieve this. Doing it in cooler temperatures will also help to achieve this more easily as the gas molecules in the air are not moving as quickly.

Here are some of the factors that make it unlikely that the sound barrier will be broken by an RC plane in the near future:

RC planes are a great activity that many enjoy, but breaking the sound barrier with them is typically not the priority. As most of them use propeller engines (which are not as equipped for these activities), they are not designed to reach these speeds. Those that are incredibly fast can be difficult to control. With continued developments, it is certainly possible that an RC plane will break the sound barrier in the future but it really depends on how much someone wants to break it.

If a person or team decides that they want to break the sound barrier it is certainly possible to do so with a custom built plane. The issue is at what point is it an RC plane and when does it become an unmanned aircraft. If you customer build a larger plane it could quickly cross the line to unmanned aircraft territory which those break the sound barrier all the time.