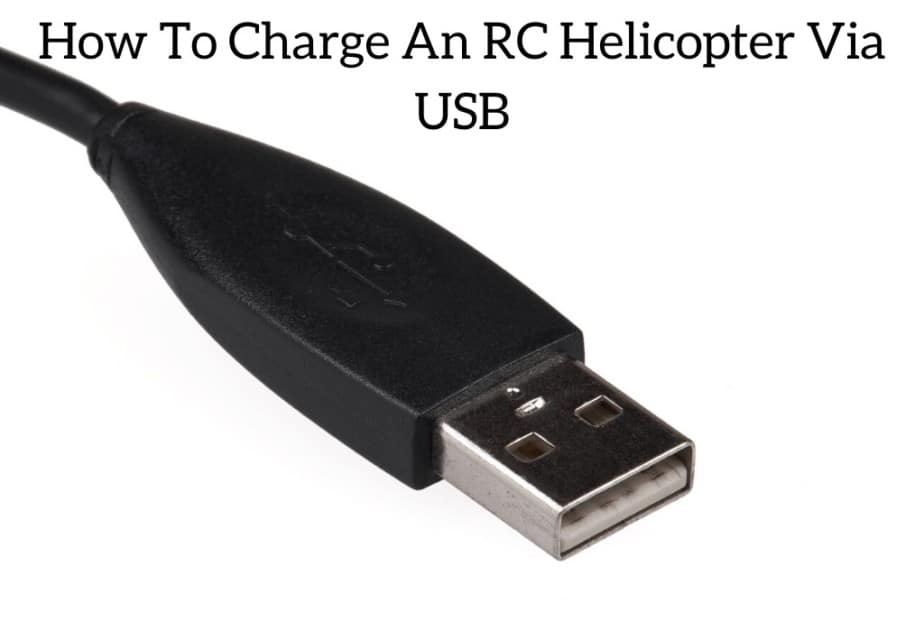 If you are here, then you probably lost your manual, and now you need to know how to charge your remote-controlled helicopter. Some might think that it is as simple as plugging it in and letting it go, but more often than not, people will ignore the warning labels written in the booklet or pamphlet and end up causing injury to themselves or damage to the helicopter.

How do you charge an RC Helicopter via USB? There are three viable ways to charge your RC helicopter. You can charge it through the remote that it comes with, the computer, or with a regular outlet. Using any USB charger is ill-advised since the one it comes with is made specifically for that model.

It is not hard to find a power source for all our electronics these days, but what people fail to realize is that the warnings typically presented in bold are for your safety and protection. Anyone that refrains from following the instructions is subject to endangering themselves and anyone else in the vicinity.

Make sure the power switch is in the “off” position before plugging it in. Regardless of what power source that you decide to use, plug the cord into the helicopter first. Once you plug in the other end, a light should turn on, indicating that it is charging successfully.

If you choose to plug it into the wall, you will need an AC adapter that will allow you to use the outlet. When the helicopter is fully charged, the indicator light will turn off. The overall charging time is about 50 to 60 minutes to complete. The flying time is based on the time it takes to charge and can last about the same length depending on the brand, size, and model.

Also, keep in mind that if you decide to use the controller to charge the helicopter, you will most likely need to switch out the batteries in the controller since those require regular batteries and not the rechargeable ones.

Use Caution When Charging

Related Post  Are Nitro RC Cars Faster Than Electric? (Are They Fast?)

The reason you should not use a universal charger is that while a cell phone power cable may be labeled as a charger, that is not the correct term for it. The real charger is already within the phone; the cord is simply a 5V bridge for the power to cross over on.

Most RC helicopters require a 100mAh lithium polymer cell, and to charge; it takes a current of 0.1A—the voltage at a max of 4.2V. If you have a power cord that puts too much power through it can cause your battery to heat up and possibly explode or catch on fire.

Lithium ion fluid is a highly reactive chemical that can easily catch fire and explode so avoiding overcharging your RC battery will keep you from damaging your battery as well as help protect you from the battery exploding and a fire starting.

Problems may arise every now and then, and when that happens, you will want to solve it as soon as possible. Here are some of the issues that might occur, accompanied by simple solutions you can use to fix them.

1. Not Holding a Charge

The voltage could be incorrect. Check the voltage with a multimeter; it should not exceed or be under whatever specific voltage your RC helicopter was made to handle. If it is not at the correct voltage, you can use a storage discharge and try charging it again. This is an especially common issue if you just recently changed out your battery and didn’t make sure that the same size of battery was used.

You may just need new batteries if the problems proceed. Or, it could be that the batteries are overcharged. You should not leave it charging unattended, also for safety reasons. Make sure to remove it from the charger as soon as it is fully charged.

Too much liquid exposure—whether it accidentally plummeted into a pond, pool, lake, or you charged it near the sink and people who were not careful repeatedly splashed the helicopter. Do not charge it near the sink or anywhere  that is considered a high splash zone. It’s also important to know how much battery life you have left If you are flying your helicopter near water. You certainly don’t want to be hovering your helicopter over a lake or stream and have it drop in the water.

If you are around other RC helicopters, your controller could be on the same frequency as theirs, which confuses your helicopter. Either fly elsewhere or alter the frequency to a different one.

The slow response time could also be caused by the battery in your remote control being almost dead. Most remotes will have 9v batteries in them so that would be the first thing to check if your response time is not working right.

If your helicopter isn’t moving or working at all it is most likely one of two things. It is either a power issue or an electronic issue. If your helicopter was recently crashed or dropped and the problem starts some electronic component might have been damaged or jarred loose. In this case it’s a good idea to open up your helicopter and check the wiring and other parts for damage.

The power issue is most likely an issue with your battery on the helicopter but can also be an issue with the battery in the controller. Most batteries can be replaced quite inexpensively so if you are having problems replacing both batteries is a good first step. You can also take this as an opportunity to upgrade the battery in the helicopter but make sure to not exceed the manufacturer’s recommendations for the battery sizes.

If none of the troubleshooting helped to relieve any issues, it might be time to purchase a new battery as a whole. Lipo batteries range from expensive to inexpensive, but you will want to one based on the qualities of your previous one.

This is very important. The same way a charger is chosen based on the specifications, so will the batteries be. These are the things you should consider when purchasing a new battery so to avoid any complications or injuries to both the chopper and to you:

If seeing someone replace their battery is easier for you then check out the two videos below. They give some general tips as well as show you exactly how to change the battery on that RC helicopter model.

Charging an RC helicopter via USB can be much more convenient than other ways that manufactures have but be sure to only use the provided cord so you don’t overheat the battery or damage the electronics on your copter.

Just because a cord fits into the port on your helicopter doesn’t mean that cord is ok to use. If your original cord stops charging your unit then find out the specs for the cord from your owners manual and buy a replacement cord with the same specifications.