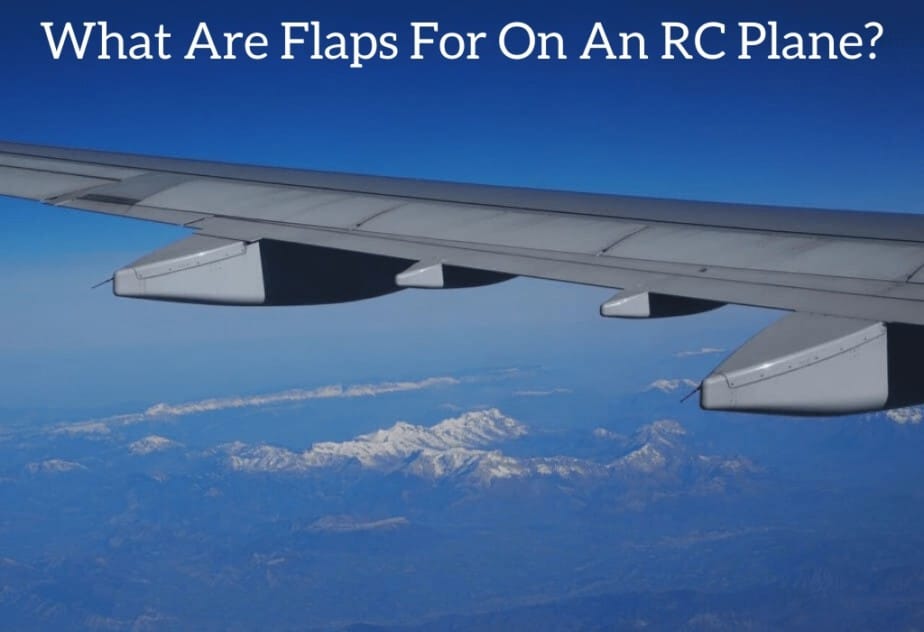 If you’ve ever flown on a real airplane and sat over the wing, you’ll have noticed there were flaps on the back end of the wings that occasionally angled upward. These allow the plane more lift or drag, depending on their position. But that’s a real airplane. You probably think a remote-control plane would be different.

So, what are the flaps for on an RC plane? Similar to a full-sized aircraft, the flaps on the wings of a remote-control plane create lift and drag, allowing your plane to fly slower before stalling. It also allows it to take off or land at slower speeds and steeper angles.

Basically, the flaps on an RC plane function the same way that they do on a full-sized airplane. However, since you obviously aren’t flying your plane from the inside, the functionality is a little bit different. We’ll take a look at how the flaps work on an RC plane, the benefits of having flaps versus not having them, and finally, how you can install your own flaps.

How the Flaps on an RC Plane Work

To really understand how the flaps on your RC plane work, you’re going to need to learn a little bit about the aerodynamics of wings. To start, look at the shape of your plane’s wings. They should be rounded at the front and taper to a point at the back, much like a teardrop.

This shape bluntly cuts through the air forcing two different currents to form. Assuming that both currents of air must reach the tapered point of the wing at the back simultaneously, that means that the currents are traveling at different speeds.

How do we know this? The shape of the bottom of the wing is flatter and straighter, which means the air current has a shorter distance to travel between the front and back. The top of the wing, though, is a bit rounded at the front, forcing the air current to move up and over before it will reach the tapered point at the back.

Related Post  Are DJI Phantom Batteries Interchangeable? Which Ones Are?

That high pressure below the wing is going to force the wing upward, and this creates lift. And actually, in case you were curious, there’s a name for this: The Bernoulli Component. Check out the video below to learn more about it.

There is another theory of how the motion of air creates lift. This is called the Newtonian Component. It is an illustration of Newton’s 3rd law that every action has an equal and opposing reaction. NASA’s website has some pretty great info about this if you’re into learning more.

So, imagine that the air sucked in by the propeller is then pushed toward the tail end. This means that as the air is forced to the back of the plane, the plane itself is then propelled forward, or in other words, the counter force of the fuselage moves forward while the force of the air around the plane moves backward.

And as this is happening, the air stream is split into the top current and the bottom current (like we mentioned for The Bernoulli Component).

The current being forced over the wing will then finish its route angled downward in relation to the level angle of the plane. So, as the air coming off the back of the wings presses downward, the body of the plane itself will react with opposing equal force upward, thus creating lift. See this in action in the video below.

Related Post  Why Do RC Helicopters Have Two Rotors?

Quick Summary of RC Flaps Before Moving On

There’s a high-pressure area above the wing and a low-pressure area below. And the direction of the top current as it completes its current over the wing projects downward. All these things are going to create a lift.

So, the flaps on the wings, when deployed, will angle down. The effect, then, is that the air moving under the wing comes off the back tip at an even steeper downward angle, further increasing the pressure below the wing. When all of this happens, the force of lift created is much greater than that of a wing without a flap, or with a non-deployed flap.

The other thing that happens, though, is that the air coming over the top of the wing will stop following the line of the wing where the flap hinge angles downward. Instead, it will create a vortex behind the wing, slowly down the forward propulsion, and effectively establishing more drag. It is at this point that your plane can fly slower with the same amount of lift.

Now, to this point, we’ve operated under the assumption that the plane continues to move at the same speed, creating the force for additional lift. However, if you were to reduce the speed, you’d be able to achieve the same amount of lift at a lower speed.

Benefits of Having Flaps on the Wings of Your RC Plane

This brings us to why having flaps on your wings is so important. As you attempt to land your remote-control plane (without flaps on the wings), you will require a long landing strip to accommodate the angle of approach. This is because the speed must be maintained throughout descent in order to prevent stalling and falling out of the sky.

Related Post  Can You Fly RC Helicopters In Parks?

However, if you were to install flaps on the wings, you could deploy them as you begin the descent. Having flaps on your RC plane wings will increase lift and drag, forcing your plane to slow down on the angle of approach.

As it slows, the plane will be able to descend at a tighter angle at a controlled speed, thus allowing it to completely stop safely on the ground in a shorter area of space.

How to Install Flaps on an RC Plane

On an existing RC plane, depending on the material that you’ve used to build, you should be able to cut into the back end of the wing to install flaps. If you’re familiar with building your own RC plane, this won’t be too difficult. You’ll just need to get a flap kit from the local hobby shop and follow the instructions.

You’ll need to map and cut out where your flaps will go on your own, though. Most flap kits are made to be used across a variety of plane models. Keep in mind what your flaps may hit when they’re open. You don’t want them to touch the fuselage, or you’ll run into breakage issues.

You will also want a computerized transmitter so you can program controls for your modifications. When you program for the flaps, you may set it up so that the elevator angles slightly upon deployment to compensate for potential pitch. The instructions should come with your kit and transmitter.

The video below gives some step by step instructions on how to add flaps to your RC plane.

The flaps on an RC plane are there for the exact same reasons that they are on a full sized plane. Having greater control over the aerodynamics will not only allow you to take off and land the planes in shorter distances but it will also allow you much more control over the speed of your plane. Once you become proficient in flying your plane you will begin to appreciate having the extra control over it that having flaps affords.