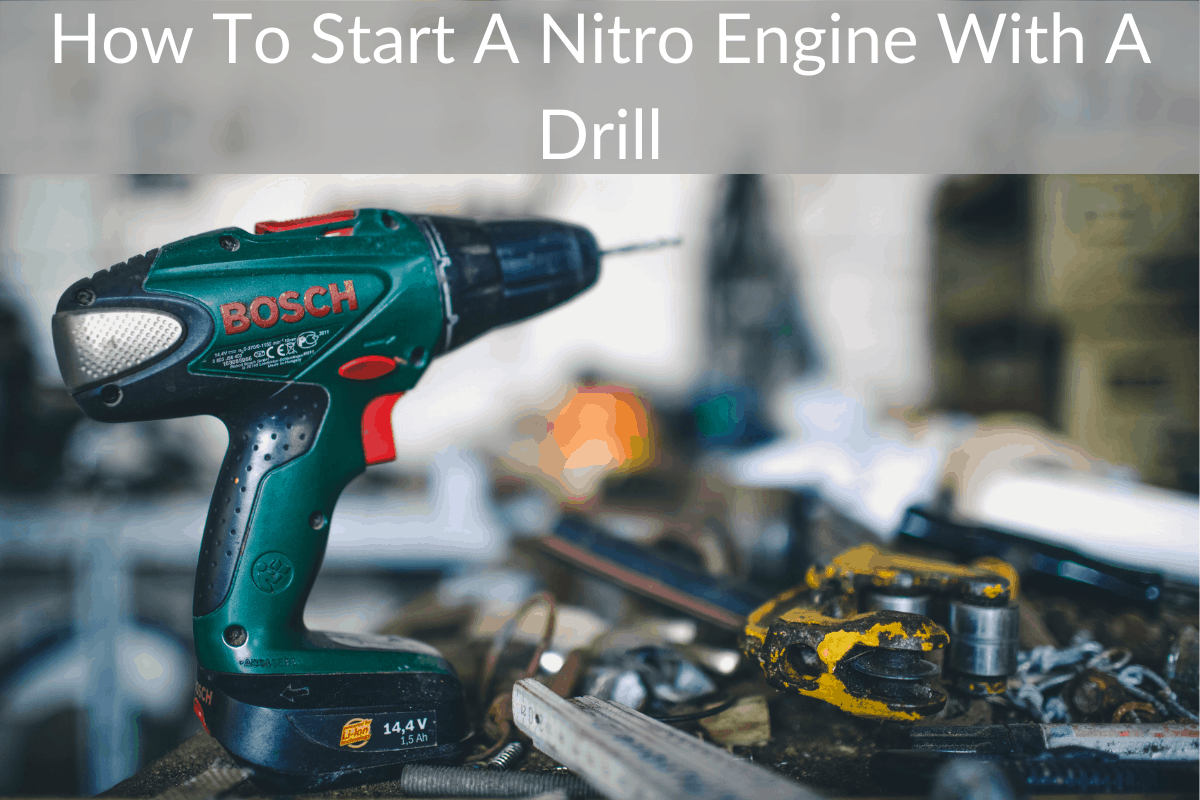 So how do you start a nitro engine with a drill?

If you want to see all the different conversion kits for nitro engines, you can find them by clicking here.

If you want to know more about starting your nitro engine with a drill, you will want to keep reading this article. You can also check out this video if you prefer to watch instead of read.

Nitro RC cars run on actual nitro fuel, and normally use a pull string to run their engine. They are normally pretty loud, for their size, but that is what makes them so much fun! When you are playing or racing one of these nitro RC cars, you don’t feel like you are playing with a kids toy, but instead, can feel the rev of the engine in your chest with every acceleration.

Why would you want to start your nitro RC car with a drill?

Although racing and driving a nitro RC is extremely fun and loud, some people still prefer battery RC cars so they don’t have to carry the fuel and other items with them. One of the hardest parts about owning a Nitro RC car, is starting the car. This is because it is not as simple as turning a key like a regular car, or pulling the trigger like a battery operated car.

When you go to start a Nitro RC car, you will need a glow plug, the fuel, normally a screwdriver, as well as muscles in order to pull the string. Just like the pull string on a mower, the pull string is used to start the nitro RC car. Pulling the string over and over again until the RC car starts is what most people do not like the most. This is why many people will either use a battery RC car, or use a drill to start their RC car.

How do I use a drill to start my car?

When you go to use a drill to start your nitro RC car, there are some things that you should know before you try to do so. If you just purchased your RC car and you are tired of the pull string straight from the start, you cannot simply pull out a drill and start your RC car.

In order to start your RC car with a drill, you actually need to remove the engine and replace the pull string starter with a conversion kit for that specific engine. Once you have the kit it is normally only 4-6 screws that need removed to get the pull string starter off. Once the pull string is removed, you will be able to simply screw on the little piece that the drill rod can attach into. Once you screw on the new conversion kit, you will need to put the engine back into the RC car. Once that is done, you will follow the same steps to start the car, but you will be able to use a drill and the rod to start your nitro RC car instead of having to pull the string over and over again.

Related Post  RC Car Stuttering? Here’s What to Do

Why should I use a drill starter instead of a pull string?

As you can see replacing the pull string is not hard to do, but some people still do not do it, as it makes one more piece for them to carry when they take the RC car out to be used. Even if you are not going to change your RC car pull string to a drill operated one, it is not a bad idea to carry the kit with you.

This is because the pull string that you are using over time will eventually begin to fray and then break. There is nothing worse than getting to a place to play with your friends or race your nitro RC car, and your pull string breaks. If you do not have one of these conversion kits, you will be sitting there without any way of starting your RC car.

Now that you know you can use a drill to start your nitro RC car, you can see why so many people do it. Not only does it make starting your RC car easier, but it also makes it more reliable as you do not have to worry about the string breaking. Although you do have to carry a drill with you to start your nitro RC car now, it is definitely worth it as risking the pull string breaking is not a good idea.

If you have done your research and read this article, you can see that replacing the pull string on your nitro RC car is not hard to do, and is not even that expensive. It is a little bit of money upfront to buy the conversion kit, but you will never have to worry about not being able to race or use your RC car if you are out with your friends. Having that piece of mind is something that many people want especially if their race comes with prize money for the winner and you are good at racing your car.

So go ahead and upgrade your car now, your arm and your friends will thank me later.