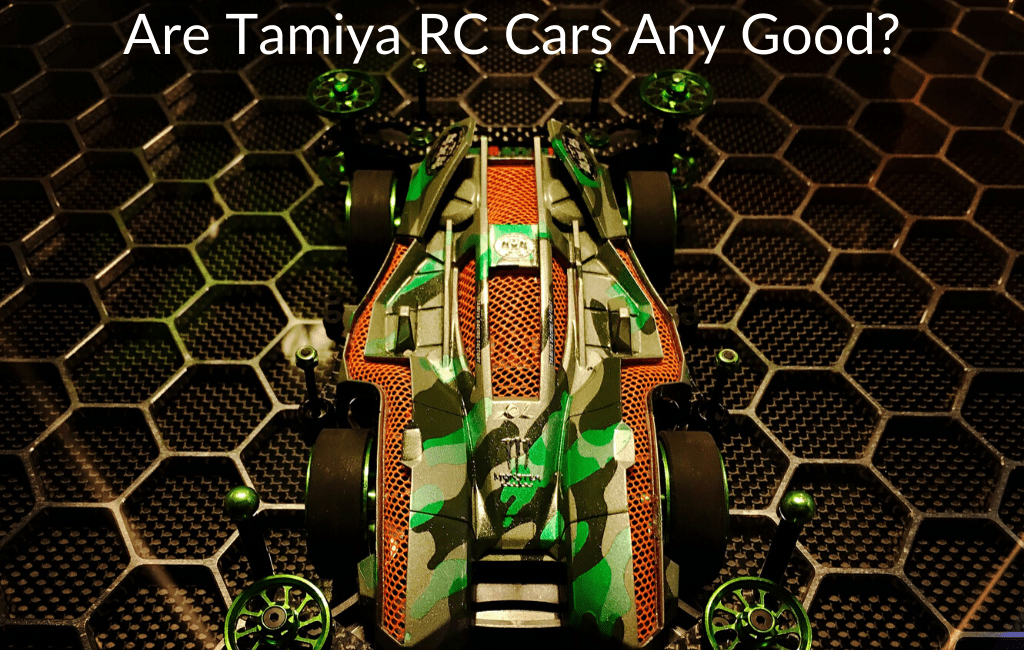 Many people easily find themselves venturing into the hobby of using radio-controlled cars, especially if racing toy cars was a typical past time of their childhood. This is because both the toy cars from our youth and many RC cars today both share a similarity in that they are usually models of super or racing cars. Of course there is one  obvious difference between the Hot Wheels we grew up playing with and the RC cars today and that is one is controlled by radio transmission and the other, more or less with our hands.

Although the Tamiya brand prides itself in always striving to be the “First in Quality Around the World,” as their motto suggests, people still wonder whether the Tamiya RC cars are good. Are they good for the price? Are they better than other brands?

There are a myriad of variables to take into consideration in labeling any product as ‘good’ or ‘bad,’ and the Tamiya RC cars are no exception. Tamiya tends to receive good reviews about the performance of their RC cars, however, if you were to search for the top RC brands, Tamiya may not necessarily be a consistent contender, due to its low popularity.

Despite this, it does not automatically exempt the Tamiya RC cars from being ‘good,’ but instead just simply suggests there are higher quality brands on the market which, over time, have become more household names.

Once you get into the hobby of racing RC cars, you will become more familiar with an abundance of RC companies and brands. One such being the Tamiya Corporation brand, which has been around since 1948 in which its inception of models began with wood. Easily identified as one of the more ‘traditional’ RC companies, Tamiya offers a variety of over 3,000 products, including high-quality RC vehicles, as well as a range of static models.

They even host an RC car racing competition, known as the Tamiya Championship Series, in which hobbyists compete strictly with Tamiya branded RC cars and accessory products.

As previously mentioned, there is a whole heap of characteristics to observe to determine how good the Tamiya RC cars are, and as such we will take a look at those to help to look at both the performance and quality of a Tamiya RC car and decide if it is “good”.

One of the most essential qualities to look for in looking at a new RC model is the control range that the remote control has. This simply refers to the distance that a model can travel away from the controller.

The Tamiya RC cars are acclaimed for their remote controller control range, as its models are usually able to travel long distances away from the remote control. In fact, Tamiya RC models are holders of two Guinness World Records for furthest reaches covered. These include the title of the ‘Greatest distance traveled by a radio-controlled model car on one set of batteries’ which was set in 2013 by the Tamiya F104 v2 with LRP 2S Lipo motor, which covered a total of 23.79 miles. The second Guinness title is the ‘Greatest distance by a radio-controlled model car in 24 hours, ‘ which was established in 2011 using the Tamiya Desert Gator with LRP Quantum. Also, the RC car remote controllers are precise and sensitive.

Whereas some people directly purchase RC cars that are already built, other hobbyists prefer to purchase an RC kit, which is essentially a do-it-yourself kit, in which they ‘build’ the RC cars themselves by assembling the parts together. People with this preference do so as it helps in becoming familiar with the intricate compositions, as well as the construction of a specific vehicle.

In choosing the perfect RC kit, one will almost always find a model of Tamiya RC car listed as easy to assemble. One such model is the Tamiya Racing Fighter 2WD Off-Road Buggy Kit (found here), which is an easy to build kit which comes with clear instructions on how to design the vehicle. Likewise, you are likely to notice the mention of many other Tamiya RC kits such as the Tamiya Volkswagen 4WD Beetle Rally Car Kit (found here) and Tamiya Hornet (found here).

Another quality of RC cars that buyers tend to consider is the accuracy of the scale size, as well as the detail of the model. As early as Tamiya established itself in the modeling business, they began designing models of ships, and later expanded into modeling cars and trucks. As such, it comes as no surprise this brand provides intricate and accurate model scale details for RC cars, as designing models has long been a part of their expertise. Tamiya RC model types also include the Ford–350 (found here).

Seeing that Tamiya RC cars have been in existence from during- and possibly before- many of our childhoods, the majority of its popular models are those that gained traction around this time. With this being so, today’s most popular Tamiya RC cars are re-releases of these cars, such as the Tamiya Grasshopper (found here) and Tamiya Wild Willy (found here).

As a result, this brand may not be a contemporary top pick for people seeking RC cars to buy today, as these renowned ‘retro’ cars are not usually the favorites for younger consumers. Regardless, however, this depends on the one’s taste and whether they opt for a cheaper and newer model or are willing to stick with the traditional ‘vintage’ Tamiya models.

In choosing a Tamiya RC car, you are most likely to want to eventually modify your car, especially if it is one of the mentioned ‘retro’ or vintage ones. The availability of these parts doesn’t pose much of a hassle since they can all be found on the Tamiya Club website, alongside an abundance of suggestions and ideas to modify the vehicle.

Despite this, however, in modifying the vehicle, some of the popular and older RC cars may have a costly price for their parts, especially if modification is being done to achieve high-quality performance.

The hosting of Tamiya’s famous Championship Series race competition makes it almost ironic, and one might say even humorous, since Tamiya’s RC cars are not amongst the fastest of the brands. If speed is one of the main characteristics you’re looking for in an RC car, the Tamiya brand is less likely to be in your options.

The average speed of their RC cars are between 12-17mph, which for some persons would be ideal, and the other hand in a competitive setting would definitely frustrate another. However, the speed of an RC vehicle is not always a well sought out quality for consumers looking for a model to buy. If it is for you, however, its best to review other competitors.

So are they really any good?

It is evident that this answer is solely dependent on the consumer’s tastes, as well as needs. Like all products, the Tamiya RC cars have both the pros and cons, as well as qualities that can be deemed beneficial or ideal for one set of consumers and unimportant to another set. In light of this, one simply needs to dissect the mentioned qualities and reviews and make the decision on whether it is subjectively ‘good’ to them or not.