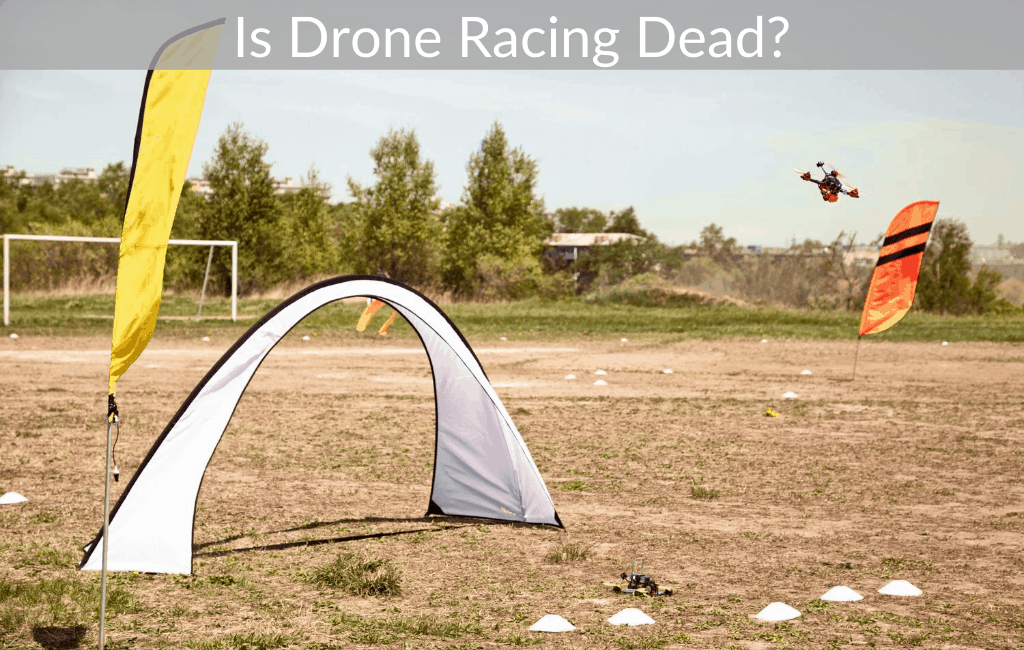 If there was a list of sports that would likely never get old to watch or participate in then drone racing would definitely be one of them. It is a kind of sport wherein the players fly drones using FPV (first-person view) systems. The drones are equipped with cameras and pilots of the drones are capable of monitoring and controlling the speed accordingly.

This concept was earlier used for RC planes but later on, drones adapted to it. If you are here then you are most probably aware of the rumors being spread about drone racing.

There are various different reasons behind these rumors including the fines being imposed on some drone racing. But what’s the reality? Can an interesting sport like drone racing be dead?

Drone racing is certainly not dead but it has been decreasing in popularity recently. One of the main reasons for this is that drones used to be a cool novelty whereas now drone prices have dropped so much that virtually anyone can own them.

If you can take your own drone to the park and use it why would you watch someone else race a drone on TV? One thing to keep in mind is just because it isn’t as popular on TV that still doesn’t mean that it’s “dead”. For it to be considered dead everyone would have to stop doing it and being how fun it is that is not very likely to happen.

To see some amazing footage from drone races check out the video below.

First, you need to understand that this is not the first time a rumor has spread regarding a sport. Earlier as well people believed some of the other well-known sports were dying due to a lack of interest for a while.

Well, one major reason why FPV will likely never cease to exist is the attention it got earlier. Most of the news channels bragged about the massive success this sport achieved in no time. What was with all the bragging? Why did it receive so much attention? Because people truly enjoyed it and were curious enough to learn more about it.

It might fade a little or not even be on TV eventually but nothing can stop it from still being a fun pastime in the future.

To learn more about why drone racing isn’t dead and likely won’t die anytime soon we need to understand more about drone racing to see why it got popular in the first place.

One major fact that you must consider is once you get into drone racing, there is likely no going back. Whether you are an expert in drone racing or a complete beginner, you know that this is true.

Drone racing is also not only about the people who participate in the competitions but it’s also about the freestyle drone flyers, who enjoy taking it in whichever direction they want. No matter what a person says, getting out of drone flying after being in it for a while is not possible.

When racing a drone from the first person view you get to fully immerse yourself in the experience as well as have the heart pounding near misses be just a few inches from your face! If the high speeds don’t get you hooked the competition and drive to win probably will.

Decline In Popularity Of The Sport

The fact that the popularity of drone racing is declining tremendously is true but the pilots are trying their best to stop that. The sponsors of races are interested in investing in something new and more exciting. This is the main reason why fewer races are being organized.

Related Post  How To Know If A Drone Is Stolen?

However the decline in the number of races has not stopped people from joining communities. One major reason behind that is the prices of the necessary items required for flying drones have decreased to a great extent.

Since buying a drone or drone parts has become so affordable it’s no longer a novelty sport and it’s something that virtually anyone can experience for themselves. Most people would rather experience the thrill of drone racing for themselves rather than watch it on TV so the ratings and sponsors have started to suffer.

However, just because it isn’t as popular of a sport on TV that certainly doesn’t mean that it is dying as people are still doing FPV drone flying all the time by themselves or with friends.

No matter what the rumors say, there is a constant improvement in technology in the drone space. The camera is usually fitted on the nose of the drone from where the visible area is covered. First-person view or FPV simply means the pilot is capable of looking at what the drone looks at.

This camera technology is constantly improving and will likely show great improvements in the near future. In order to get a clear view of the visible area, the pilot must have a pair of goggles required for the same. When it comes down to goggles, with the price the features improve.

Keeping in mind the growth potential, the drones will soon be equipped with cameras that cover a 360-degree view which means that courses can become more complex and there could even be more technical type competitions rather than just seeing which drone can go the fastest.

One major reason behind the decline in the popularity of drones is the myths that some people usually believe to be true.

Related Post  Can You Fly RC Planes In The Rain?

What can be done?

Drone racing has been loved by people for years. If you are one of these people who are crazy about drone racing then do not keep your love of the sport to yourself! Promote it as much as you can and do not stop yourself from doing something you love no matter what the situation might be.

It doesn’t matter what people say or believe drone  racing is something that will likely never die although whether it stays popular or even available to watch on sports channels is debatable.

It could certainly continue to decline a little bit but in the long run, it will likely still be around in one form or another.

The main reason behind a huge community of people crazy about drones is the adventure it involves. Most people often refer to it as a real-life video game which is true as it exactly feels just like that when racing in FPV. Growing this community is of utmost importance for drone racing to gain a special place in the future.