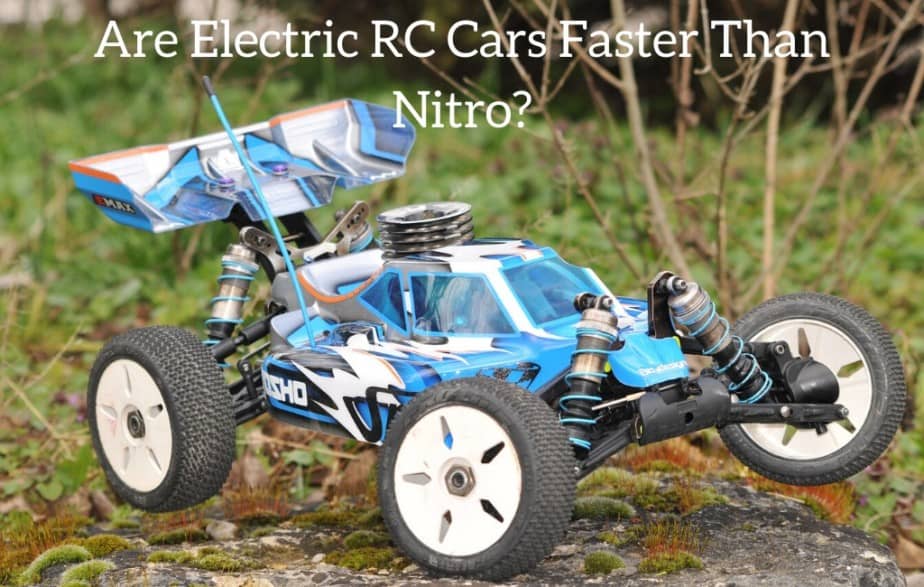 As the debate on nitro vs. electric RC cars rages, the truth remains that each of these cars has its loyal fans. Some people swear by electric RC cars while other people would only ever want to own a nitro car.

Obviously each person will have different preferences but in this article specifically we will talk about the speed of an electric RC car vs a nitro RC car.

So, is an electric RC car faster than a nitro one?

The fastest electric RC car has a top speed of over 200 MPH while the fastest nitro RC car was just north of 120 MPH. Just looking at these numbers it is obvious that the fastest car is the electric one.

If you want to see some of the fastest RC cars ever then check out this video below!

Generally speaking, when talking about the speed of RC cars, there are two kinds of speed to examine: the real speed and the scale speed.

Related Post  Do RC Heatsinks Work? (Which Are Better?)

The speed of a car also generally depends on a number of factors, such as battery and motor. These individual factors directly affect the performance of the car and its speed.

Factors that influence the speed of an RC car

Here are the major factors that determine how fast or slow your RC car will go:

This is one of the most important factors that affect the speed and acceleration of an RC car. The state of your gearing will determine not only the speed of your RC car but also how fast it can accelerate. Every RC car comes with a pinion gear and a spur gear, both of which you can modify to achieve the performance and speed that you need. If you want to change your car’s performance slightly, it is better to change the pinion gear rather than to change the spur gear. Also, choosing the smallest pinion gear will help you get a greater gear ratio.

An RC car’s size also has an immediate impact on its speed. First of all, the size of the car affects the acceleration of the car. If the car is big and heavy, it slows down the acceleration. Normally the bigger it is the slower it will be as well but that isn’t always the case.

The larger the car is, the bigger batteries and motor that it can handle so a larger car might be able to achieve higher speeds than some smaller models with smaller motors and batteries.

Now, even though the two types of motors perform the same basic functions, the brushed motor slows down speed because when it is fitted into an RC car, the friction it causes takes away some of the power that would have enabled maximum speed.

The brushless motors, on the other hand, offer up to a 15% more efficient drive because they do not cause the friction that brushed motors cause. They also produce less noise and heat, and for these reasons, they allow for maximum speed.

The only downside of these batteries is that they have quite high discharge rates, which means that you would be required to charge them very frequently.

The nickel-metal hydride batteries, on the other hand, do not offer the same power and speed as the lithium-based batteries. Their main advantage is that they’re cheaper and require a lot less maintenance. But, if you’re looking for speed, you can’t count on them.

All things being equal, RC cars can run at a faster speed on smooth surfaces. This means that if you want to get the best possible speed, stay on the paved and smooth surfaces when you’re racing with your RC car.

However, electric cars have gotten a lot of newer features that have allowed them to increase their top speeds by a large amount.

From the above list of factors, the two main factors that have ensured that electric RC cars are faster than nitro RC cars are the batteries and the motor. As we have already noted, cars with brushless motors run faster because brushless motors don’t cause friction, heat, or noise.

What’s more, LiPo batteries are often used to power the fastest electric RC cars. Nitro RC cars, on the other hand, are powered with nitro fuel which is not as efficient as the brushless motor is.

If you are looking to get the fastest possible car then you will want to buy a brushless electric RC car. An electric RC car will have a much higher top speed than its nitro powered counterpart.

However, just because an electric RC car is faster doesn’t mean that you should only buy electric powered RC cars. Nitro models are a great option for many people as not having to charge your battery all the time and simply refilling the fuel tank allows for you to spend a lot more time playing with your car than you can with a battery powered one.

But, when it comes to the fastest RC cars, battery powered models are far and away the winner in that battle.

If you want to learn more about battery powered RC cars vs nitro powered ones then check out the video below.