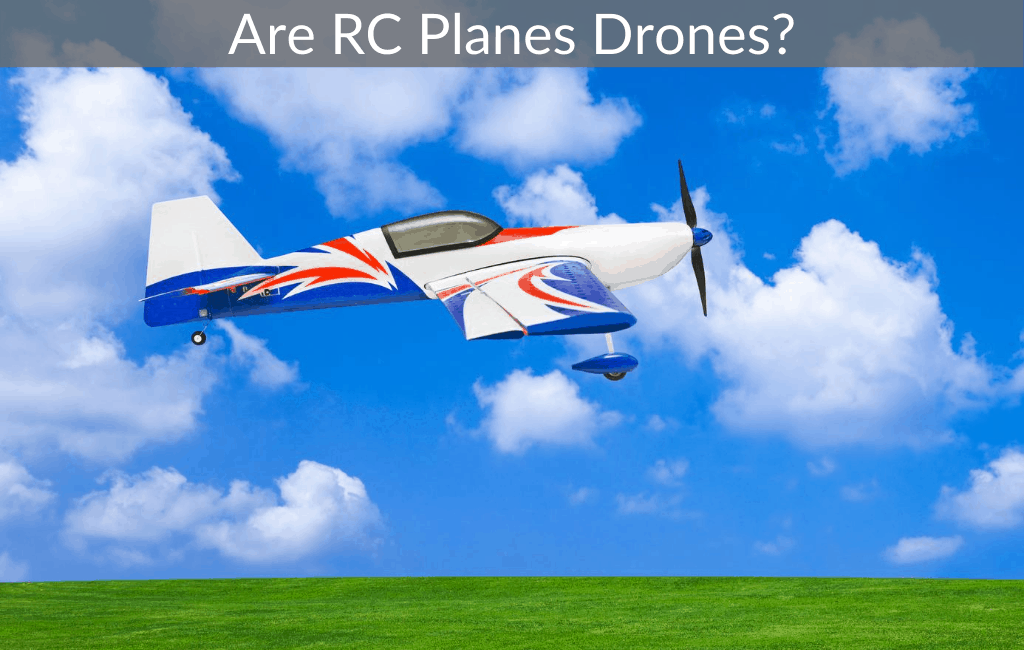 We are living in such an exciting world today that you can now comfortably buy your own drone and use it to pursue your aerial interests. Whether it is that you are learning how to fly, making a movie, taking pictures, racing, etc. or whether it’s for business or just for pure recreation drones have a wide variety of uses.

There are a number of drone-like systems around, and while one might be tempted to sum all of them up as drones, this is not correct.

However, in some situations like getting videos above the ground and even recreation, drones and RC planes can both have very similar uses.

To see a drone actually racing an RC plane you can check out the video below.

Both Are Unmanned Aerial Vehicles (UAV)

It is very common to hear people associate drones with the media and military, and remote control planes most often with the Federal Aviation Administration (FAA). However both drones and RC planes are unmanned aerial vehicles and, sometimes, can have very similar uses as both are fitted with cameras to capture views above the ground.

They are both aerial devices that are designed to fly without a human inside of them and they can be remotely controlled from a distance, or in the most advanced cases, fly themselves without any human effort.

However the word drone has many different meanings depending on the context. Drones can be large unmanned aircraft that are used by the notary for operations overseas while it can also mean a tiny recreational device that will fit in your hand. Many drones fall into the latter category.

For remote control planes however their goal is to be remote-controlled by humans for recreation.

Remote control planes are typically made from quite soft materials, and they are not super sturdy and also don’t have a lot of the technology that drones have. Therefore RC planes cannot be used for highly demanding roles like:

Due to risky assignments that drones are commonly sent to do, they are mostly designed to be expendable—lightweight and cost-efficient—while still being durable and with sophisticated technology enough to perform these dangerous operations.

These roles are very demanding and hence would require advanced and sophisticated UAVs, unlike remote control planes that are solely made for recreation. The wonder of flight is a phenomenon that keeps fascinating humans from all walks of life and for many people this has grown into a full-fledged hobby.

The Differences Between a Remote Control Plane and a Drone

The device construction is the first point to start laying out when you are looking at the difference between a drone and an RC plane. Commonly, many remote control planes are not made of sturdy materials. Although, there are a number of them that are designed to have built-in cameras and substantial structures, quite a lot of them are made out of paper, foam board, depron, balsa wood, coroplast sheets, or composite materials like fiberglass or carbon fiber.

Related Post  What Happens If An RC Plane Goes Out Of Range?

This makes drones more suitable for use by emergency services than easily damaged RC planes.

Since RC planes are not developed to be a lot like drones; this makes them suitable for recreation.

On the other hand, drones are highly developed machines designed with sophisticated technology. Drones are certain to be more durable and more efficient at flying. This is why drones will also typically be more expensive than remote control planes, even though remote control planes might be larger than them.

Another major difference is that there are many drones that are designed to fly automatically without the need for an external controller. On the other hand, a remote control plane, as it implies, requires someone to control it.

Drones are very sophisticated in flying into great heights that would be impossible with remote control planes. For this reason, camera drones, in particular, are a great commodity for photographers and filmmakers, both amateur and professional. Drones are also better at being more maneuverable and steady than a remote control plane is. Drones can actually be easier to control, although they are more complex machines since they have so much technology built into them.

Many hobbyists are quick to argue that the major difference between a drone and other remote control planes is that the former allows for flying without limitations, or maybe just a few limitations. So a drone might be what you want if you desire to do more than just enjoy watching your machine fly in the sky.

Related Post  Why Should You Have a Brushless Motor In A Quadcopter?

However even though they are different, around the world, many countries’ aviation organizations are putting both RC planes and drones under the same definition (UAVs)  and putting them together under the same new laws.

Canada has adopted the term Remotely Piloted Aircraft System (RPAS) to mean “a set of configurable elements consisting of a remotely piloted aircraft, its control station, the command and control links and any other system elements required during flight operation,” and on June 1, 2019, set new regulations for them.

The US Federal Aviation Administration defines any flying craft without a crew as an unmanned aerial vehicle regardless of size and has placed remote-controlled planes under the same regulations as drones. A few of which that remote control planes and drones must be:

Hence they are against the FAA’s definition and regulation, implying that they do not regard their beloved remote control planes as drones and should not be placed under the same strict regulations that would stifle their recreation.

Ultimately drones and planes are very different devices even when you compare the fact that they look so much alike in some cases. Drones and RC planes are both UAVs but an RC plane is not a drone.