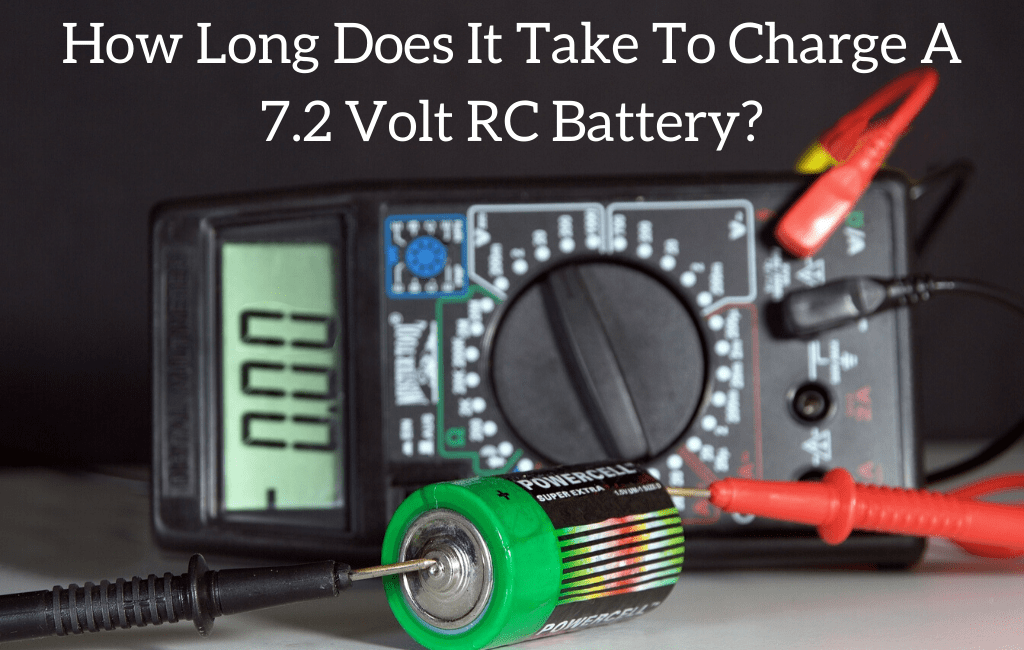 So, how long would it take to charge a 7.2V battery?

How long it takes a 7.2 volt RC battery to charge would depend on the capacity of the battery. A 3000 mAh battery, for example, that is charged at 3 amps (1C) will take up to one hour to charge. At 6 amps (2C), it will take 1/2 hour to charge. If the wall charger works at about 1 amp, the charging time will be up to 3 hours.

In essence, depending on the capacity of the battery and the speed of the charger the charging times will vary.

Unfortunately batteries vary a great deal in capacity and charges can even change how fast that they charge over time. So while your RC car’s battery might take one hour to reach a full charge now it might take 2 hours after the battery and charger have been used for a few months. Most battery chargers have a built in stop to prevent them from overcharging the battery so if you leave your RC car’s battery on the charger a little too long it shouldn’t hurt it at all.

If you need a new RC car battery you can find the perfect one at a great price by clicking here.

For some additional information about specific charging times you will want to watch the video below.

There are some other things that you need to know about your RC batteries. These things are important so that if you encounter any issues you will know exactly what you are talking about and be able to fix them easier or at least explain the problem better.

Things You Should Know About RC Car Batteries

RC vehicles, even the nitro-powered models, depend on batteries to run. Even though nitro engines burn fuel, a battery is needed to power the receiver and servos. Now, here are some things you should know about RC batteries.

There are two main types of batteries that electric RC cars use: Nickel-Metal Hydride (NiMH) and Lithium Polymer (LiPo). The names of these batteries basically refer to the materials in the battery that react to store and release energy as electricity.

If the battery you have is a ready-to-run (RTR) model with an included battery, it’s possibly a NiMH. NiMH packs are inexpensive, rugged, and do not need a lot of special care. But, they’re heavier than LiPo batteries of similar voltage and capacity, and their voltage constantly decreases as the pack discharges. As soon as you start driving, your car gets slower by the minute, and even though this isn’t noticeable in the beginning, it will continue to steadily slow down until the battery is depleted entirely. .

NiMH packs are made with about 6-8 cylindrical cells like those ones we use in flashlights and TV remotes.

LiPo batteries are normally sold as accessories, but some RTR models come with them. LiPo batteries are lighter than NiMH batteries of the same capacity and voltage, which helps your model get a more powerful feel. Something else that contributes to that feeling of power is the fact that the LiPo has a good ability to maintain its voltage longer as the pack depletes.

Instead of delivering less voltage as you run, a LiPo typically delivers a steady voltage for most of the time of your run then falls off quickly when the battery is depleted.  One of the major downsides of LiPo batteries is that they are expensive. They also need you to have a specific care regimen for them to ensure safe use and longevity.

LiPo batteries are assembled with flat cells that look like slabs. A lot of LiPo batteries used in RC cars come in 2- or 3- cell configurations.

The most important thing to consider when choosing batteries, whether they’re NiMH or LiPo, is their capacity and their voltage. Capacity determines how long your RC vehicle can run on a single charge while voltage determines the amount of speed and power that your model will deliver.

The big numbers you see on the battery label such as 3300, 4000, 5000 indicate the capacity of the battery in milliamp-hours, which is generally shortened to “mAh.” The higher the number of mAh, the longer the period your car can run on a single charge. Also, the higher the number of mAh, the longer your battery will take to charge. Now, as per the essence of the mAh rating, if the rating of your battery is 5000mAh, what it means is that it can hold a steady 5-amp load for a whole hour. “5” comes from “5000” because one milliamp is 1/1000 of an amp. When you divide the mAh rating by 1000, you get the amps. If you have a 6000mAh battery, what that means is that it can hold a 6 amp load for an hour and if you put it on a 5 amp load, it can run for an hour and twelve minutes. So, more capacity simply means longer run time.

Similar to capacity, more volts is better—to some extent. The power system of your vehicle is built to handle a specific amount of voltage. When that voltage is exceeded, the system will, at the very least, shut down if it features “over-voltage protection.” If not, the electronics will end up getting fried, so check the specifications of your speed control.

With LiPos, this is different. A single LiPo cell delivers 3.7 volts, and seeing as this is the case, LiPo packs come with fewer cells for a particular voltage. The most common configurations are 2-cell, 7.4-volt packs (2 x 3.7 = 7.4) and 3-cell, 11.1V packs. Depending on the model you have and the amount of voltage it can handle, you can possibly even use 4, 5, or 6-cell packs. Always make sure to check the specifications of the power system for your specific models to avoid damaging the electronics with too high of voltage.

What Does “S” Stand for?

We have already noted that NiMH and LiPo packs are normally referred to by the number of cells in the pack: “2 cell” or “3 cells,” for example. You may also see LiPo packs with a designation like 2S, 3S, 4S, and so on. When this is the case, the “S” stands for series, and shows that the cells in the battery pack are connected “positive to negative.” Some LiPo packs come with cells connected both in series and in parallel, with this being designated by a “P.” A “2S2P” LiPo pack, for example, refers to a pack that has two pairs of LiPo cells inside with each pair wired in parallel (2P), and the two pairs wired together in series (2S). Now, almost every RC LiPo pack is wired in series and simply referred to as 2S, 4S, 5S depending on the number of series.

There is a lot more to how long an RC battery can charge for than just a simple math formula. The amount of time it takes to charge your RC car’s battery will vary depending on the size of the battery, the amount of power that the charger puts out as well as how efficiently the battery and charger are connected.

Most of the time your owner’s manual will give specific instructions on how long to expect the charging process to take but with most chargers leaving it on a little longer won’t hurt anything as the charger should have an automatic shutoff when the battery is full.