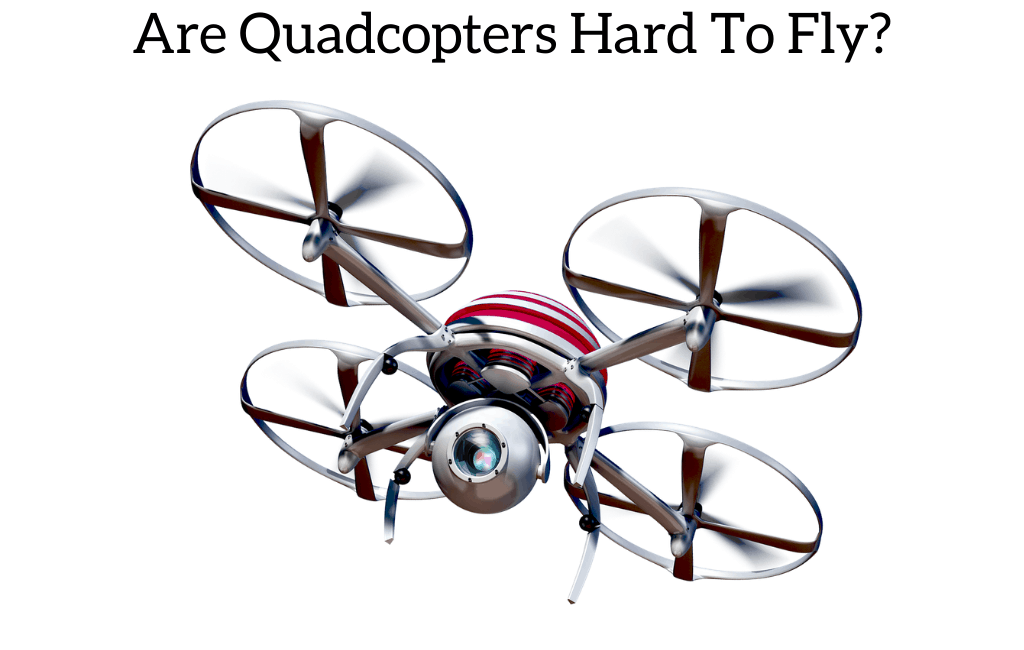 A lot of people think that quadcopters are difficult to use or pilot and that is true on some of them. Quadcopters can range in size from miniature ones to large ones that can carry packages or people! That variance of size will also have an effect on how hard it is to fly it.

So, are quadcopters or drones hard to fly?

If you are capable of using an iPhone, then you are capable of operating a larger quadcopter. However, this does not mean that flying a quadcopter/drone is foolproof. Even the most advanced quadcopters require some general knowledge if you want to avoid crashing or losing your quadcopter entirely if it disconnects from the remote.

With the continued advancement in technology on board a quadcopter it will continue to get easier and easier for users to fly them.

It is still easy to make a mistake when flying your quadcopter especially if you have never flown one before. The majority of errors are simple to correct but if you have never flown one then knowing what is causing the issue is half the battle. For most people, asking a friend or family member who has used a drone/quadcopter before is the best way to avoid these beginner mistakes.

If you don’t know anyone who has flown a quadcopter before then it is a great idea to start very slow and low to the ground to prevent a damaging crash with your quadcopter.

When it comes to using a quadcopter there are a few things that you should know about before you ever begin. The first one that we will discuss is the onboard sensors.

There are many sensors inside of a drone that make it work properly, and some of these sensors can be affected by everything that is around you.

There are a variety of different sensors on your drone and the amount of sensors and what they do can vary from quadcopter to quadcopter. Arguably the two most important sensors that are on a quadcopter are the GPS sensor and the compass. Both of these sensors work together to control your drone when it is in the air and make sure that it flies in the right direction that you tell it to.

If you have a poor signal with either of these sensors it could cause you to have some issues and may even end up resulting in a crash. Often these two sensors can be interfered with by objects that you are flying in, near, or under.

For example, if you are flying your drone in a forest among a bunch of tall trees you might not think about how the GPS will have difficulty connecting with the satellites and picking up its position properly but that is exactly what will happen. Once you lose GPS signal controlling your quadcopter becomes far more difficult and can even lead you to not being able to find it.

Since the compass and GPS work together if one of them is having issues it causes problems for both of them. If the compass is not calibrated properly or has interference that is causing it to not read directions properly then it can easily cause your drone to head off in the wrong direction.

In worst case scenarios it can even cause your drone to fly in circles and eventually crash as well!

Some drones are more prone to interference than others and normally the price and brand of the drone have a lot to do with that. For example, a DJI drone has many built in features that help it avoid being interfered with that other cheaper drones do not have.

What that means is that a DJI drone will have far less calibration issues and far less issues in general with flying in the wrong direction.

Another thing that can also affect your flight is how far away from the controller that your drone is. Some drones might say that they have a long range but because of interference the range is 5x less than stated on the packaging. This is where a quality drone comes into play as drones that are less likely to have interference issues will have much longer “real world” range than a cheaper drone will have.

If you are going to be flying your quadcopter near a lot of buildings or other things that might mess up the signal then it is a good idea to upgrade to a more expensive drone that will be able to handle the interference without causing any major problems. Often this will mean that you need to go to a more expensive model or even a better brand entirely.

How to fly a quadcopter.

Now that we have talked about the sensors and briefly mentioned the difficulty of flying a quadcopter, let’s get into more of the details of actually flying one.

If you have never flown a quadcopter or drone before you will want to start in a giant area with no trees, buildings, people, or anything else around. The extra space might seem like overkill but when you are starting out it is incredibly easy to make a small mistake that will cause a crash. If the only thing that you can possibly run into is the ground then you are much less likely to damage the drone or hurt someone!

The first time I used a mini drone I didn’t follow this advice and I tried using it in my backyard that was about 1,000 sq feet. I almost crashed it into the house multiple times and my daughter ended up with it tangled in her hair because i couldn’t control the drone properly.

Since it was a mini drone it was quite easy to get out of her hair and neither her hair nor the drone was damaged but if it would have been in a large open area by myself it would not have happened.

There are one basic thing that you should know about your drone before you take off. This is the controls. Knowing how exactly the controls work and which one to push and how hard and in each situation is the hardest part about controlling a drone.

Below is an example of all the controls for flying a quadcopter and how each operates:

Now reading an academic explanation of the controls probably isn’t much help so the video below gives you a great demonstration of those controls and what exactly they do.

Once you have a grasp on the controls and how they work with your drone the next thing you will want to do is calibrate it. Some drones require you to do this every time while other drones only have you do it when you first buy it and then it only needs redone if you have issues.

Check your owners manual for specific starting instructions for your specific quadcopter.

Many drones will come with a beginner mode or kids mode. This mode will allow you to learn the controls much easier and with a much lower chance of crashing the drone. The cheaper drones might not have this as an option but if you are a first time quadcopter user buying a drone with this mode will help you immensely.

More expensive drones such as DJI will often have step by step instructions on their site or even on your screen when you have a phone connected to the controller. There is a reason that DJI is the drone leader because these sorts of things are all built in and makes flying their drone much easier.

Flying a quadcopter or drone is not that terribly difficult especially with the larger more expensive models. The cheaper the model that you purchase the harder it normally is to control. Although this isn’t always true it is quite often.

For most people you will not want to start with a mini drone as that will likely result in immediate crashing. You will want to learn to fly with a larger more stable drone and then you can go down to a mini or indoor drone once controlling a quadcopter becomes second nature to you.