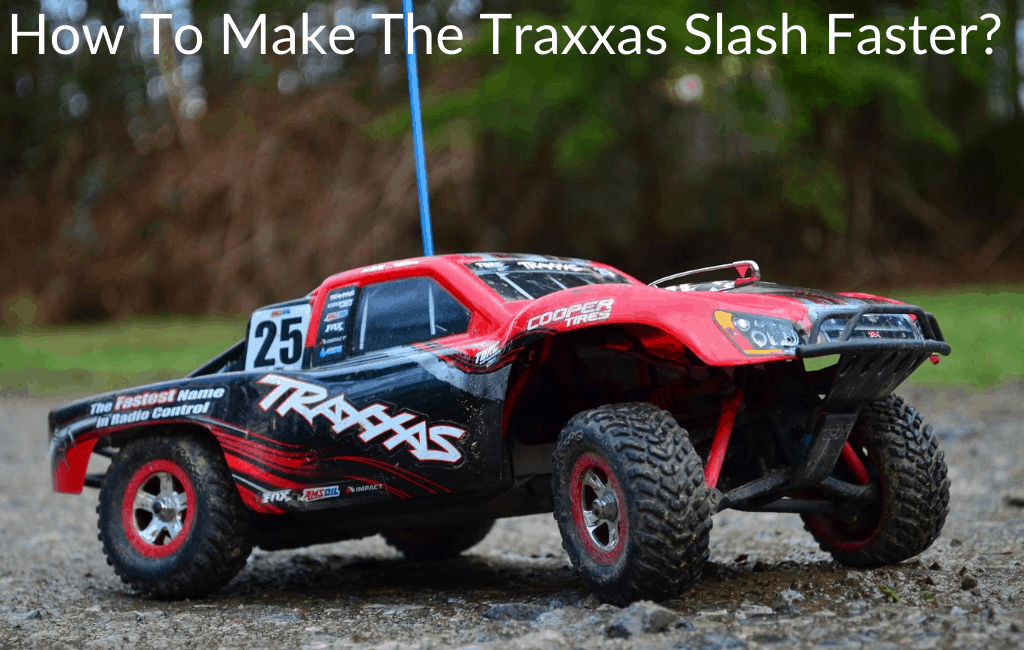 If you’re looking to make your Traxxas Slash faster than the typical 30+ mph speed it offers, there are a few things you can do, and this article is going to let you know exactly what they are.

There are four basic things that you can upgrade on your Traxxas Slash to make it better. They are:

We will discuss each of those in more detail a little bit later in this article. It is important to understand that upgrading any RC car to make it faster will require some time, money, and effort to do so don’t expect for your car to get faster with the flip of a switch.

Before we get into more detail about these upgrades for speeding up your Traxxas Slash first, let’s take a look at the factors that generally affect the speed of an RC car.

If you prefer to watch a video instead the one below will give you some additional specifics that you can use to make your Traxxas RC car go faster.

Factors that influence the speed of an RC

Before we talk about what exact upgrades you should make on your Traxxas Slash it is important for you to understand what affects the speed of your RC car. The main factors responsible for how fast or slow your RC car will go are:

The motor of an RC car is one of the most important determining factors when it comes to the speed of the RC car. There are two types of motors used in RC cars: the brushed motor and the brushless motor.

Just as the name implies, brushed motors are motors that come with brushes while brushless motors, just as their name also implies, are motors without brushes.

Now, although the two types of motors perform the same basic functions, the brushed motor doesn’t offer maximum speed because when it is fitted into the RC car, the friction it causes takes away some of the power that would have enabled maximum speed and hence, it slows down speed.

The brushless motors, on the other hand, deliver up to 15% more efficiency because they do not cause friction like the brushed motors do. In addition, they produce less noise and heat, and because of that, they make it possible for you to get a lot more speed with this type of motor.

This is another important factor in determining the speed and acceleration of an RC car. The state of your gearing will determine not only the top speed of your RC car but also the performance.

In the same way, the size of the car affects the speed. The bigger and heavier the car, the slower its top speed will be. The size of the RC car will also affect the aerodynamics of the car as the larger car will catch more air which in turn will slow it down.

The only disadvantage of LiPos batteries is that they have quite high discharge rates, which means that you would need to charge them very frequently and they also wear out faster than NiMH batteries so the lifetime of the LiPo is shorter.

The NiMH batteries, on the other hand, do not come with the same power and speed that lithium-based batteries offer. The main advantage of NiMH batteries, however, is that they’re cheaper and do not need a lot of maintenance. But, if speed is what you are really looking for, you can’t trust NiMH batteries to deliver that.

Uneven terrains will typically make it tough for you to race easily and stand in your way of getting top speeds. If the area you are at has many hills your RC car could be in the air more often than not which means it can’t speed up as fast.

So, now that we have talked about the factors that generally affect the speed of an RC car let’s talk about how you can improve the speed of your Traxxas Slash.

How to Make Your Traxxas Slash Faster

The Traxxas Slash typically comes with smaller tires, and even though this might seem like a reason for it to offer more speed since smaller tires are less heavy, other parts of the Traxxas Slash are big and heavy. The Slash also comes with a bigger and taller chassis as well as a large front and rear bumpers to go with its equally large body.

So, to get more speed from your Traxxas Slash, here are some things you can do. :

Making yourTraxxas Slash RC car faster is relatively simple in that there are no complex things to do however what you need to upgrade to get better speeds can quickly add up in cost as well as time.

For many people it is easier (and possibly cheaper) to simply purchase a different RC car that is designed with higher speeds out of the box rather than upgrading your current RC car.

Ultimately it is a decision that you have to make on whether these upgrades to your Traxxas Slash are worth it to you or not.