Contents show
1 What to do when your ESC is blinking red and green?
2 What is a Traxxas ESC? Is it really necessary?
3 Transmitter Blinking Red?
4 Solid red light on the receiver? Is it dead?
5 How do you Reset your Traxxas ESC?
6 Traxxas BEC and ESC, are they the same things?
6.1 Related Posts:

Traxxas makes some of the best RC cars and trucks currently available on the market. However, just because they make great RC vehicles doesn’t mean that someone won’t have an issue with their vehicle.

Some people have reported having an issue with their Traxxas ESC light blinking red and green and were unsure how to deal with it so I wanted to write this article to help those people out who are having this issue.

There are multiple reasons for the ESC to be blinking green and red. One of the most common reasons is because the EZ-Set button was held too long when turning off the vehicle. The LED on the speed control blinking red indicates a low voltage shutdown.

When the battery falls below the minimum threshold the speed control will shut down all motor output and the LED on the ESC will begin to blink red.

If you need to get a new Traxxas ESC you can find those by clicking here. 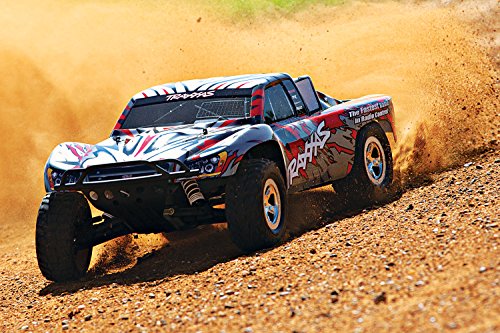 If you love RC Trucks then you will love the 2WD or 4WD Traxxas Slash!

With a top speed of over 60 mph, you will love driving this RC vehicle!

What to do when your ESC is blinking red and green?

There are a couple of different things that you can do to fix your ESC when it’s flashing.

The first method is simple but you can apply it when you have a LiPo battery. If you have a LiPo( Lithium Polymer) battery then connect it to the ESC and turn it on. The light on the ESC should then be a steady green, indicating the LVD is ‘ON’. After that, you can simply turn off the LVD by holding the EZ-Set button until the light switches to red.

But if you don’t have the LiPO battery then what should you do? Well. Traxxas made another way to do it. This method is longer than the previous one mentioned but it’s also not incredibly difficult.

If all of the above steps were completed successfully then your RC vehicle is ready to drive.

What is a Traxxas ESC? Is it really necessary?

The short answer is Yes, it is very much necessary for all RC vehicles. A BEC-equipped ESC that is meant for RC use often incorporates a low-voltage-cutoff circuit which can sense the voltage drop caused when the battery has very little charge left in it.

In the case of a drone or RC plane when the ESC will cut the power to the ‘drive’ motor in order to provide the ‘steering’ servo with enough power to be able to bring the model safely back to the operator. The power to the propeller would be cut but the operation of the control surfaces would be maintained in order to perform a dead-stick landing.

Without this technology, all control would be lost when the battery expired.

For a normal RC car that is on the ground this is a safety measure that is designed to prevent over discharging when using a LiPo battery as over discharging it can damage it or even cause it to catch fire (in rare cases).

With a NiMH battery the power can be run all the way to empty without damaging the battery which is why you can turn off the low voltage detection when using that type of battery.

Typically once it’s flashing users can’t do anything to make it stop until they turn the RC vehicle off or pull the batteries. Consistent low voltage in the receiver will trigger a fail safe so there is enough power to center the throttle servo before it completely loses power.

There is a common way that many people use to solve this problem of a flashing light on the transmitter or ESC. If you are having that issue simply follow the steps below.

This is the most often used solution by many Traxxas enthusiasts but this one is not an official method. Many people have tried doing this and got results while many people have also failed as well.

Solid red light on the receiver? Is it dead?

Many people claim that the receiver has a solid red light on it and it doesn’t work which in turn causes them to think that their receiver is dead. Well, it may seem to be dead but there is a way to try and fix it.

Somehow if all of this does not work then you can try another receiver to make sure that your receiver is really dead. Obviously if you replace the receiver and it still doesn’t fix the issue then you have other problems.

How do you Reset your Traxxas ESC?

If you power on an RC vehicle with a nickel-metal hydride battery and the low voltage detection is currently enabled the ESC may blink red to indicate low voltage. When this happens you just have to reset the ESC to solve this problem.

The LED should blink once and turn off. Quickly pull and hold full throttle while watching the LED. When you see it blink twice then go right to full reverse without pausing in the middle. Hold full reverse as you press and hold the EZ-Set button for about ten seconds. Now release the trigger and button.

If you do it correctly then the LED should glow red. That’s it you reset your Traxxas ESC.

Traxxas BEC and ESC, are they the same things?

No, they are not. BEC is a battery eliminator circuit. It is a device that should step down the voltage from the main battery to make it safe for the radio system to use, and eliminate the need for the second battery. Without a BEC you would have to have two batteries, one for the motor and another to power the radio system.

It would take up a lot more space and also the batteries are heavy so it would significantly slow down the RC vehicle.

ESC is another technology that is mainly used in RC planes oR other RC vehicles. It works when an RC plane or board falls below the minimum voltage. It has a cutoff circuit which can sense the voltage drop caused when the battery has very little charge left in it. The ESC then cuts the power to the ‘drive’ motor in order to provide the ‘steering’ servo with enough power to be able to bring the model safely back to the operator.