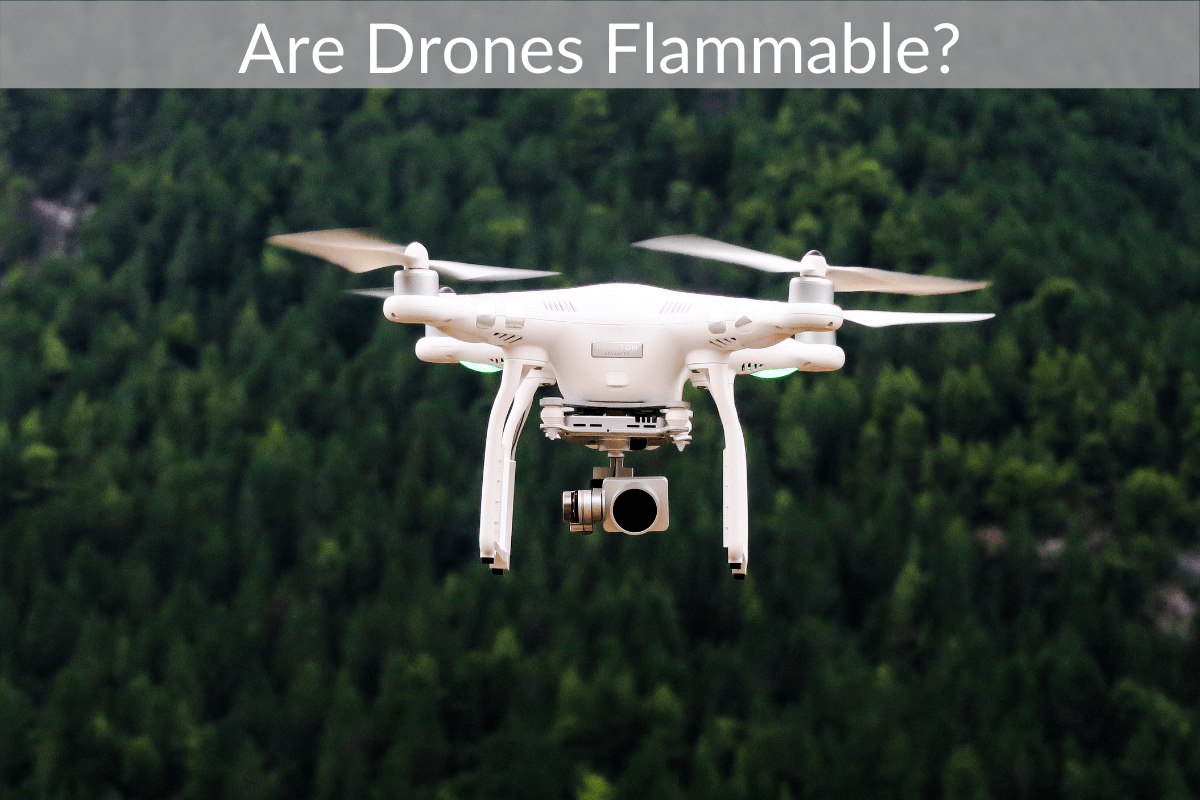 If you are considering purchasing a drone one of the things you are probably concerned about is how safe they are to own and operate. If you have done any researching at all you may have come across people who said that their drones blew up or caused a fire.

These types of articles that talk about drones being flammable are what make people question if drones are safe at all. If a drone is flammable, why should anyone, especially a minor, be able to fly them?

Because drones are fairly new to the world many people do not trust them yet. This is because they have not been proven to be 100% safe and many people have even heard horror stories about the damage they have caused.

Drones are actually extremely safe and are not flammable in regards to exploding. What can explode on drones is the battery as if those are overcharged or used after they have started to puff up they can ignite and cause the drone to “crash and burn”

Drones are actually quite safe though as long as your batteries are well cared for (and not used after they have begun to swell. Drones have even been tested by police that use them to check houses with gas leaks to make sure there is no one inside.

The testing was done in a very safe manner and is used to prove that drones are not flammable. If you would like to watch the video you can find it below.

Before you purchase a drone, obviously you want to make sure that it is safe so no one gets hurt. No one wants to be responsible for causing damage to someone else’s property or starting a fire because they were careless so keep reading this article and I will give additional information about drones and whether they are safe for you to use.

Related Post  How To Get An RC Plane Out Of A Tree?

To see the most popular drones that are currently on the market you can just click here.

Along the same lines of drones being flammable people obviously think about them being dangerous as well. Everyone wants to be cautious when it comes to drones as they are unmanned and can be used in many different ways.

Although drones do have some danger associated with them as they fly in the air, they are not particularly dangerous as they are not extremely big. They may do some damage if they fall out of the sky and hit a vehicle, but most newer drones have a safety feature that prevents that from happening.

The creators of the drones do not want there to be any damage or danger associated with their drone which is why most drones go through rigorous testing to make sure that they are not dangerous to anyone before they are sold. Drone manufacturers also take into consideration that people of all ages will be flying these machines which is why they are so user-friendly.

After all, why would they want to create a device that can only be used by older adults when the majority of people who own a drone are under the age of 25?

Drones are a lot of fun for people to fly or play with, which is why many people give them to their kids for Christmas and birthdays.

When you first think of a drone, one of the first things that come to your mind is not its ability to help firefighters. This thought probably didn’t even cross your mind but it does happen.

Drones can help firefighters and are currently being used to scour wildfire areas and help search for people. Using these drones can help pinpoint peoples exact location without putting a firefighter in danger.

Firefighters actually use drones for many different things including search and rescue and even extinguishing fires. Some firefighters even have specialty drones that can withstand heat and carry up to 500 pounds of payload (usually a fire retardant).

The specialty drones would be able to carry in supplies where a manned aircraft would not be able to reach the area safely. They can also use these drones to drop water on wildfires to help extinguish the fire.

Is flying a drone over a wildfire illegal?

If you’ve just purchased a drone recently and you’re still trying to figure out all the legal ways to do it you may have wondered where exactly it is illegal to fly your drone. With all of the wildfires going on in the United States you’ve probably wondered if you can use your drone to get some good footage of the fires.

Because wildfires are normally so big there are plenty of places you can go to get shots of the fire without breaking any laws or causing any interruptions to the firefighters. Although getting firefighters in your video fighting the fire would be extremely cool, it is not worth the risk of being fined, or going to jail.

Are drones fun to fly?

Drones are an unmanned aircraft that you can fly around that sometimes have a camera on them so you can see where you are flying. Some smaller drones do not use cameras which means you have to keep them in your line of sight.

No matter if you have a small drone or a large drone, they are all extremely fun to fly. Not only are they fun to fly, but they are also very easy to learn how to use. Most people that are over the age of 10 can learn how to fly a drone in just a few hours.

Once you know how to fly a drone they are extremely fun to use and play with. There’s nothing quite like being the pilot of a drone as you watch it take off the ground and fly into the air.

Some people actually find it scary to fly a drone, while others enjoy it and have a lot of fun. It can be scary when you are first starting off, but it does not take long to get the hang of it.

Not only are drones not flammable, but they are not dangerous to fly at all. You should be careful when you’re first learning how to fly, but if you are in an open space you have nothing to worry about.

Learning how to fly a drone can sound stressful, but because the controls are easy it will not take you long to get the hang of it. Drones are extremely fun to fly no matter if you are 15 or 80 years old.

There are many different types of drones that are available in today’s market, and you will have to decide what the best one is for you to purchase. If you were looking for a good drone that is not going to break the bank, you can find it by clicking here.

Drones have far more uses than just being used for fun as they can be used to help emergency personnel search for people as well as fight fires. The best part is that because they can do it all, you can simply purchase the drone that best fits your needs.

No matter if you purchase an expensive drone or if you are just playing around with a cheap one, drones are extremely fun to fly and show off to your friends and family with.