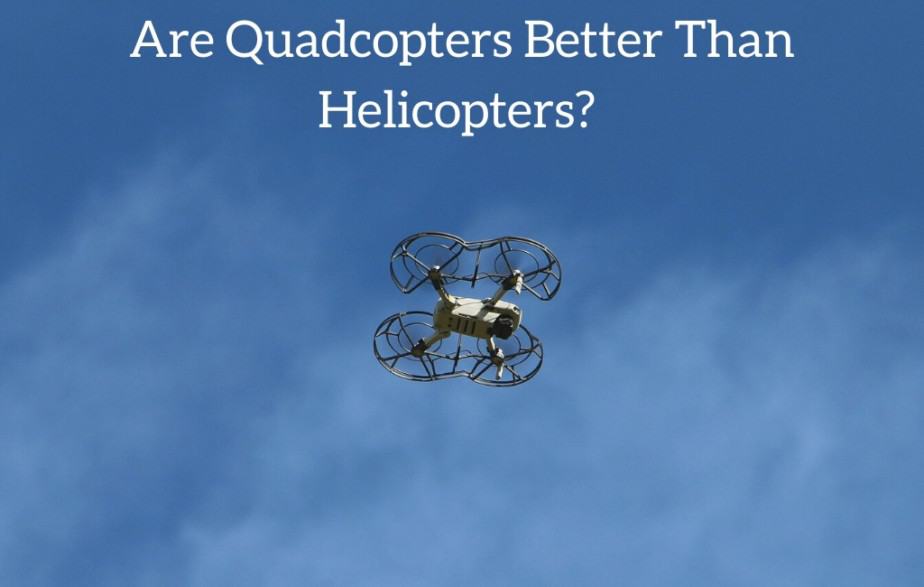 Quadcopters (also commonly known as drones) are trendy gadgets these days. Quadcopters have gained a lot of visibility because they have played a significant role in producing some of the most amazing aerial footage ever. Many of the fantastic videos we can see online about high buildings, beautiful landscapes, and crazy aerobatics were filmed using us quadcopter or helicopters.

Even if you are not shooting any video, quadcopters still offer a relatively easy to fly platform that allows you to have lots of fun and a great flying experience. But, are quadcopters better than helicopters?

Quadcopters (drones) and helicopters are really designed for different people. Quadcopters have a variety of uses including filming while most RC helicopters will just be used for fun. Quadcopters and a little bit more difficult to control (depending on the model) but because of their extensive features they are far more popular than their helicopter counterparts.

If you are thinking about buying a flying RC vehicle but are unsure if a helicopter or quadcopter (drone) is the best for you then you will want to read the rest of this article. In this article we will go into more depth about the differences between the two devices to help you decide which you prefer.

There are a few things that you should think about before you decide which one you want to buy. These things are all important to know to help you decide which device will be the best for you.

They are both excellent devices and owning each of them have made people happy but if one is better than the other in certain situations then it is a good idea to know those scenarios so that way you can make as much of an informed decision as possible.

Quadcopters are growing in popularity at a high rate because they offer a relatively easy to fly platform that is also very stable. A quadcopter has four types of motors in a square shape, and it is by managing parameters such as the speed and angle of these rotors blades that many exciting and fun things can happen.

The primary thing you have to do is manage the rotor blades so that you can perform all sorts of aerobatics and special maneuvers.

Quadcopters have been used for applications such as aerial photo and video recording because they are more stable than helicopters are. Quadcopters are much better at staying at the same altitude and location  until they are told to move than a helicopter is.

This is something quadcopters do better than helicopters.

The higher the stability, the easier it is to fly the device as well. There are a bunch of electronics which quads have which manages the signals from the transmitter and translates that to the motors to produce the best results. A quadcopter is a complex system that requires electronics and programming to offer the super stability that some models can have.

Some helicopters are proud of the fact that they don’t require such an advanced system to be stable, and this could be perceived as a weakness for the quadcopters but it’s the opposite. The reason is the method of keeping the quadcopter stable is handled by the electronics so the person flying the drone doesn’t have to worry about all of those things.

Don’t assume that helicopters are more challenging to control or less stable. It is just that some of the best RC helicopters don’t have as many of the electronics that a quadcopter has. For a helicopter, you are in control of just about everything while in the drone, you are aided by an electronic control in charge of producing the right outcome.

Quadcopters and helicopters are both pretty flexible and can more or less perform the same type of activities. Since they can both be used for similar activities then knowing how well they do those activities will help you determine which is better for doing it.

If you intend to use a camera or another medium weight object, then a quadcopter is for you. They have a larger body, and the design of the drone allows you to hang something at the center of the structure. A helicopter may fail to get balanced on all sides and that would affect the center of gravity, altering the entire functionality of the device and possibly causing it to crash.

Both quadcopters and helicopters can perform 3D flight. The significant difference is the response time that you get when sending a command. The helicopter reacts faster than quads because there are only one or two motors that need to be adjusted while the quadcopter needs to reconfigure the speed and rotation angle of four motors.

Since quadcopters are more stable than their helicopter counterparts then drones are able to be used for a lot more activities than helicopters are.

Assuming you have very little or no experience with RC flying devices, you should know the rule for differentiating a toy grade device from a hobby-grade one. 3-4 channels can be a toy grade device, while five and above will normally be considered hobby grade ones.

The most basic helicopter works with three channels, and quads have a minimum of 4 channels. This means by design quads are harder to fly than helicopters. But as previously mentioned, you get a lot of electronic aids to control the drone and thus it is possible to have a great flight experience even with the additional channels of control.

Helicopters can be very simple and fun to fly even at the starting stage. What will make the difference is your preference combined with where you want to go with your flight experience. Take a look at advanced pilots of both quadcopters and RC Helis, and you will know what you would like.

In the past, a quadcopter would be much more expensive than an RC helicopter. Time has changed this, and now you can get an excellent quality quadcopter for around $100. When choosing one of these devices, spare parts are essential. The price tag should not be the only indicator of your budget as it is important to know how much it will cost to run the device or repair it if you crash.

Quadcopters and helicopters may need some spare parts over time, so make sure you check the price of spare parts and compare them as well.

In most cases, the sellers of RC helicopters or drones also release spare parts packages. These can be sold separately or as a bundle when you first purchase your gadget. Note that some models of these devices can be very cheap, but when you need spare parts, you discover that these cost more than the original purchase price of the device.

If you want to see some more comparisons between the two check out the video below.

As you can see, these devices share differences and similarities at the same time. It’s not a matter of determining which one is the best but simply which one is the best for each person. If you want as simple of a flying experience as possible or if the person you are buying it for is younger than an RC helicopter is probably the best choice.

If however you are wanting to use the drone to record some video of you doing something or simply record while you are exploring some new areas then a quadcopter (drone) is what you will want to buy.

Many of the newest drones on the market have amazing features on them that blow the RC helicopter away. These features such as automatically following you while recording video really take their usage possibilities to the next level!

Only you can decide which type of flying device is the best for you but for most people the drone/quadcopter is the better option.

Our personal favorite drone is the Holy Stone HS720 for those people looking to buy a more advanced drone or Snaptain S5C for those people who are budget conscious or don’t need the top of the line product.