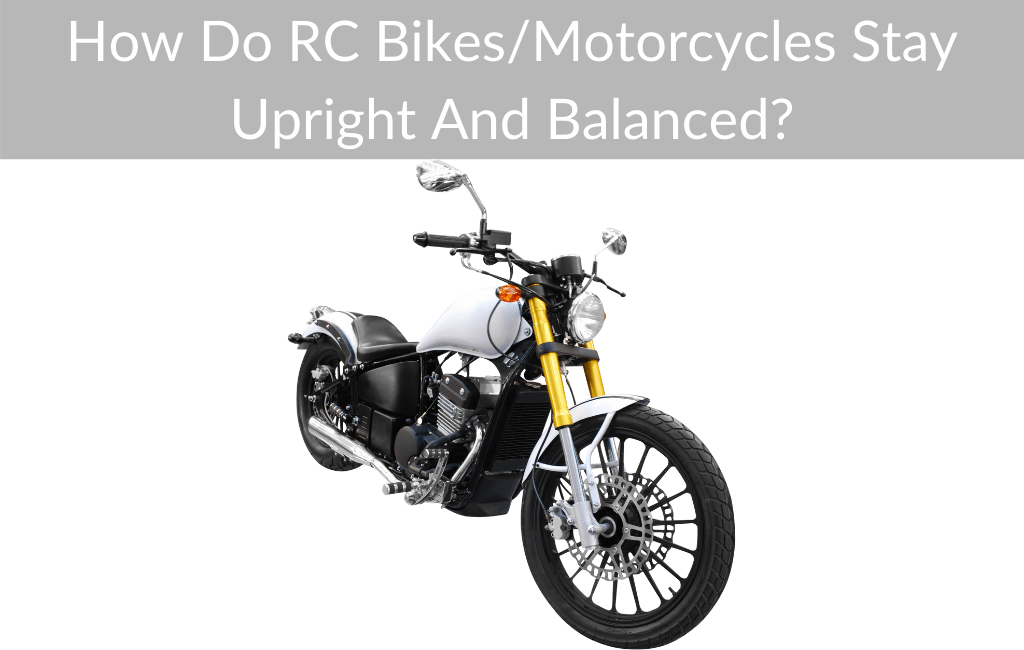 RC cars, bikes, and trucks are immensely popular amongst people all over the globe. They are not just popular for a hobby either as many people collect and invest in these miniature models of bikes and trucks for participating in different racing shows that are organized for these RC vehicles.

These shows are fun, thrilling and also a way to earn easy cash prizes for many individuals. RC bikes do not demand a lot of a monetary investment and are also easily available. You can buy an RC car, bike or truck of your choice online in many places as well.

When people first see RC bikes the first question that often comes to mind is “how”. How do these bikes stay upright when they are stopped or even when they are moving?

To have this feature on your RC bike you don’t have to spend a fortune either as many of them are available with this feature for under a few hundred dollars. One such model is the Upriser RC motorcycle (found here) and it has that auto balancing feature so there are no “training wheels” or bars to hold it upright even when it is standing still!

There are many RC bikes on the market (some good and some bad) so learning about them before buying is vitally important. In the rest of this article we will try to answer some other frequently asked questions about RC bikes.

You can also check out the video below to see a couple of models in action.

How do RC motorcycles work?

RC motorcycles work on the same principles as Rc cars and normal motorcycles. They are kept upright by forward momentum just like a traditional bike and are powered by either batteries or nitro fuel.

The battery powered models are always considerably cheaper than the nitro models but they also aren’t nearly as fun to use. There are many different battery powered motorcycles such as some at retailers like Walmart up to more expensive machines, however they all have one thing in common in that they are rechargeable and run on battery power.

Nitro RC bikes are slightly different in that they run on nitro fuel and have a more traditional engine and exhaust. Just like nitro RC cars these motorcycles are louder than their battery powered counterparts and also feel much more real than them as well.

Many people prefer using a nitro RC bike simply because of the realness that it brings to the table.

One downside that all RC bikes have is that they can really only be used on pavement and the only tricks you can likely do with them is wheelies or going fast. With RC cars you can go off road quite easily with most models so using them anywhere is easy, however with RC bikes they can easily get turned over because of a bump or rough area so you are confined to the pavement with almost every single model.

This could be why this type of model never really caught on when compared to RC cars or even drones but ultimately, RC bikes really just aren’t seen or used very much at all.

When people hear the word nitro they often think of either nitroglycerin or nitrous oxide (nos) so when they hear nitro RC they immediately wonder whether an RC bike is dangerous. Of course if nitro stood for either of those terms then it could be considered dangerous however it doesn’t.

Quite honestly anything can be dangerous if you aren’t careful. I’m currently sitting under a fan and despite the fact that no one would say that a fan is dangerous it certainly could be if it wasn’t installed properly and it falls on top of my head!

People often feel like nitro RC vehicles including motorcycles are harder to keep up and maintain then battery powered models but is this true?

You certainly have to be more careful with a nitro RC bike and you also have to make sure to properly use and clean it as well as make sure that the fuel is mixed properly, however none of this is actually very hard. It’s simply extra things that you have to do.

experience but if you are trying to not have much work at all while using an RC bike then you will likely want to go with a battery powered model rather than choose one that is nitro powered.

I hope this article has been helpful in answering your questions about RC bikes/motorcycles. Honestly this type of RC vehicle can be a ton of fun to use if you have access to a large parking lot or even a basketball court.

Whether you choose a battery powered RC bike or a nitro powered one you will surely have a lot of enjoyable hours using it by yourself or with friends and family gathered around.