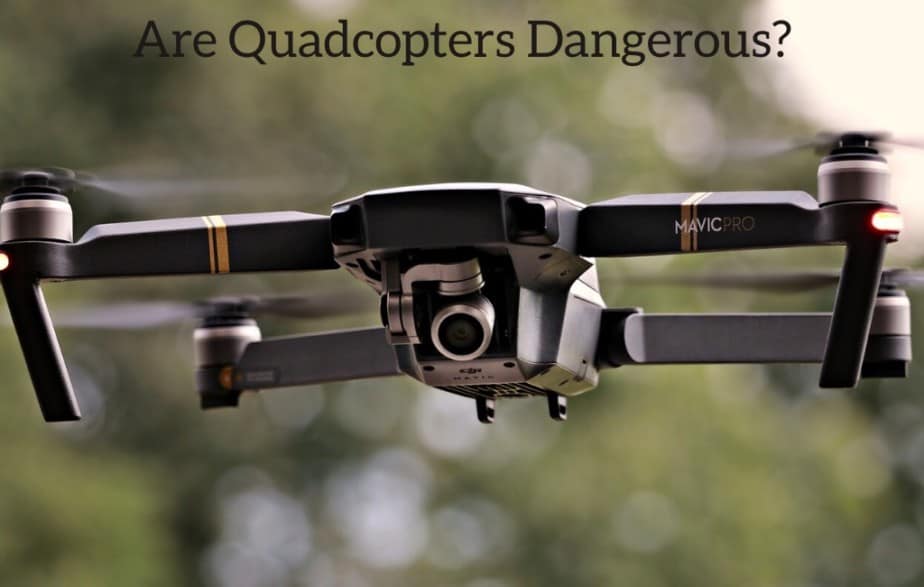 When using a quadcopter or drone a little bit of common sense goes a long way. Avoiding flying over residential areas or groups of people you can avoid the possibility of injuring anyone if you aren’t flying above them.  By following the rules set forth by the FAA (or your government’s rules) you will also decrease the likelihood of your quadcopter being a danger to anyone.

The Federal Aviation Administration has spent a lot of time and a lot of money trying to come up with regulations for owners of quadcopters and drones. There are already quite a few rules that they have put in place that can be found here.

These rules are designed to help you fly your quadcopter safely so that way you or anyone else will be in as little danger as possible.

Even with these rules in place there are still some people who fly their quadcopters without following them and this can cause an issue not only for the quadcopter’s pilot but also people all around them.

Everyone probably already knows that if a quadcopter hits a plane in just the right place, disaster could follow. That is why the FAA has a rule in place that quadcopters can’t be flown above 400 feet or within a certain distance of an airport, but somehow people still don’t understand the importance of following these rules.

If you want to see what can happen if you crash your drone into a person then you will definitely want to watch the video below.

In recent years quadcopters/drones have become more and more popular. As technology has advanced the tech on these drones has also increased which has made them more useful in a variety of circumstances. With this increased use has also come an increase in the amount of crashes and incidents involving drones.

Consumer and business quadcopter use brings with it privacy concerns, regulatory issues and concerns about the skill level of amateur pilots. Drones have contributed a lot in the world as well, such as disaster recovery, reforestation and delivery of goods. Still, sometimes things don’t go as expected and when this happens a drone can cause a serious issue.

Here are some quadcopter disasters which have led to some of the rules that are currently in place and have also made many people feel that quadcopters could be dangerous.

1. Drone crashes near the White House.

During a Christian Democratic party campaign in September 2014, a Parrot AR drone crashed in front of German chancellor Angela Markel. The drone was piloted by a German pirate party member as a government surveillance protest. No one was harmed but the scenario raised serious concerns over similar things happening  with weaponized drones.

3. Drone cuts off the tip of a photographer’s nose.

A drone crashed into the face of Brooklyn Daily photographer Georgine Benvenuto, chopping the end of her nose off and cutting her chin quite severely.

In Australia a drone was being used to take photos of competitors when it crashed into triathlete Raija Ogden, causing a minor head wound which required stitches.  The drone operator claims that the drone crashed after someone in the crowd stole control of it from him.

In the fall of 2013 people gathered at the Virginia Motorsports Park for the great bull run festival with live music. A drone that was being used to record video crashed into the bystanders, injuring several people in attendance.

One main concern for consumer drone use is the potential for operators to pilot drones into a busy airspace. In Washington, as a news helicopter was covering a local fire, the pilot noticed a drone flying too close for comfort. No harm was reported at this particular incident, but the FAA said it receives 25 reports every month of drones flying too close to human-crewed aircraft. Recreational drone flights are supposed to be kept under 400 feet per FAA regulations.

7. Drone nearly crashed into Airbus A320

In July 2014 a drone almost collided with an Airbus A320 as it was taking off from London’s Heathrow airport. When the incident occurred, the plane was about 700 feet off the ground. The BBC reported that the civil aviation authority rated the event as a severe risk of collision and during takeoff it could have caused some serious issues with the plane.

In Mexico near the US border a drone carrying methamphetamine crashed. The drone was delivering more than six pounds of crystal meth when it crashed in a supermarket parking lot in the Mexican city of Tijuana. According to the DEA, drones are often used to transport drugs over the border since they are virtually impossible to detect.

9. Drone flies over the Bank of America stadium

Fans and players were surprised when a drone flew over the Bank of America stadium during a Carolina Panthers football game in Charlotte. There was no harm or damage caused, but its operators were detained and questioned afterwards. This incident prompted the FAA to criminalize drone flight in certain areas.

A Dutchman crashed his drone in the Grand Prismatic Spring, a well-known hot spring in Yellowstone National Park. At the time park rangers were concerned that the downed drone, as well as an attempt to remove it could hurt the spring.

11. Drone attacked by a hawk

The case of nature fighting back against human-made machines as a drone met its demise at the talons of a red-tailed bird flying in a Cambridge park. The drone caught the battle on its attached camera. Even though this isn’t  a common occurrence, the argument can be made that drones still pose a threat to wildlife.

Drones are often used to capture footage of historical landmarks that can be difficult to see up close, but that can lead to some problems as well. During preparations for a 2016 /2017 New Years Eve display at Seattle’s famous Space Needle, a random drone crashed into the landmark.

Drones in and of themselves aren’t incredibly dangerous but often the drone’s pilot takes risks or does things that risk hurting people or even property nearby. Quadcopters can certainly injure people or even be used for nefarious purposes but whether your drone is dangerous is ultimately in your hands.