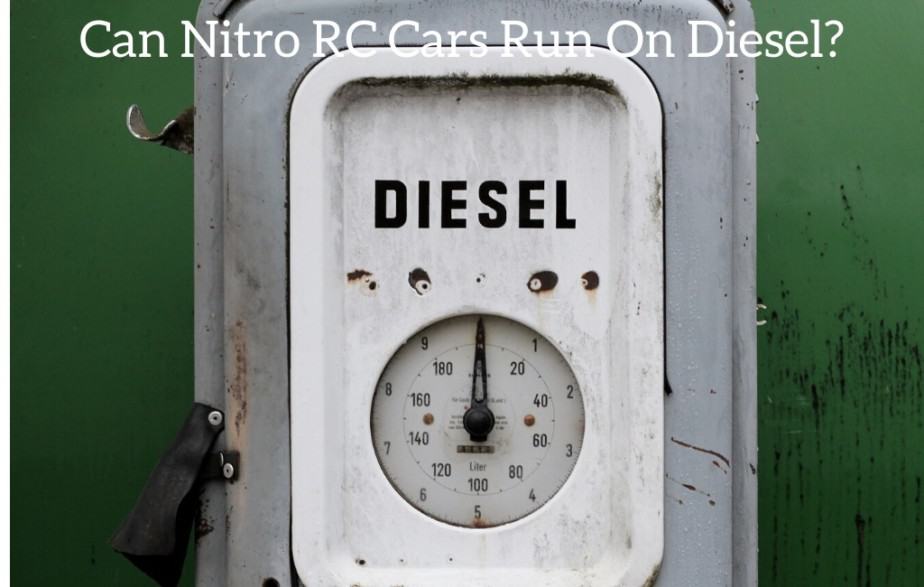 Radio-controlled glow engines cars use nitro fuel, a methanol-based combination of nitromethane and oil. The amount of nitromethane in nitro fuel is about 20 percent but could increase to 40 percent or higher. The fuel is mixed with castor oil or synthetic oil to provide lubrication and cooling.

A nitro RC car engine is designed to burn nitro fuel, but can it run on diesel fuel? The concept of the two engines seems similar but will it work?

A nitro RC car engine will have a hard time igniting diesel fuel. Diesel requires significant compression to be ignited. Additionally, the material in the nitro car’s engine can’t withstand the energy that the diesel fuel will produce. The engine isn’t strong enough to handle a more energetic, dense fuel like diesel.

An RC enthusiast knows the reason why nitro engines are powerful is solely due to the nitro fuel. Diesel fuel RC cars could be made but they would have to be significantly different than a nitro RC car.

Research on the matter provides a definitive no to the question but why? Why can’t nitro RC cars cannot run on diesel sold at the local gas station.

Why do people want to use diesel?

The idea to use diesel fuel normally arises from the fact that nitro fuel is quite costly. A quart of decent 25 percent nitro fuel will cost around 20 bucks ($80 a gallon!), thus anyone looking for an alternative fuel is entirely understandable as compared with diesel or gasoline that is quite expensive and might be out of some people’s price range.

There are some tweaks that you can make to your RC cars that will allow you to use diesel, keep reading to learn more.

The effects of using diesel

What would happen if you used diesel to try and run your nitro RC engine? As stated above, Diesel fuel is naturally way too energy dense for a nitro car engine. What does that mean? Fuel energy density is the amount of energy that fuel generates when ignited.

Related Post  How To Break In A Nitro RC Buggy

Diesel releases four times more energy on ignition compared to your typical 20% nitro fuel. An average nitro car can’t withstand such pressure and will lead to the engine breaking down. Several things might happen to your engine when you fuel it with standard diesel.

The engine might not start at all and nothing will happen. The diesel could fail to ignite as an RC car engine lacks the needed compression to ignite diesel fuel. The engine glow plugs might not provide enough heat required to create a flame and light the fuel.

This is the better of the two options.

If the engine actually does ignite it might break the motor entirely. The RC car’s motor and the glow plugs might try to ignite the diesel causing internal damage to the motor of the car while it is running.

The effects on the engine’s parts

In the end, you will have to replace the whole engine due to the number of internal engine damages. This might be a perfect time for an upgrade to a more advanced engine with more torque!

That is not all, there are more reasons why diesel isn’t a good idea. Ultimately it is a good idea to avoid trying to use diesel, no matter how cheap the fuel is. Diesel is much more viscous than nitro fuel, resulting in misfiring inside the engine.

Nitro fuel is much more watery than diesel making a perfect fuel for an RC car motor.

Can you modify RC cars to use diesel?

As seen above, nitro fuel is expensive, so you might need a way to try and save some money on your RC racing hobby.

Wanting to switch to diesel is understandable but just changing the fuel without modifying the engine or other components will cost you more money not save it!

Finding companies that do these mods or that doing the mod yourself is normally a time consuming or expensive process.

After the mods, you can only use special fuels in the modded engines and you will often have to replace parts on your engine on a regular basis. For most people converting to a diesel motor from your nitro one is not worth the cost as you will spend more in converting and upkeep than you will save in fuel costs.

If money is truly the issue then buying a battery powered RC car will keep you from having to buy the expensive nitro fuel.

Of course those aren’t the only options, you can also continue to use nitro but just be more conscious of how it is used and try and save some fuel.

How to save money on nitro fuel

Switching to diesel or a much cheaper fuel would seem to be a good idea, yet its expense makes it not really a good option. If you could just put diesel in a nitro car then RC car racing would be much more affordable and even more fantastic.

However, just because you can’t put diesel in your nitro engine doesn’t mean you should give up on trying to save some money. You can save on fuel by decreasing the consumption rate saving a few bucks over the long term while still enjoying the use of your nitro car.

How can you save money on your fuel?

Mix your own fuel

The first thing to try is mixing your own nitro fuel. Yes, it’s possible to mix your own nitro fuel which will help you save some money on the cost. It’s a great option that will allow you to use your time to save money and you won’t have to try to conserve fuel in other ways.

Get coaster oils, nitromethane and methane. You will also need a container to mix the ingredients. You can learn the process in detail by watching the video below.

Making your own fuel will save you a lot of money especially when you buy the ingredients in bulk.

Using fuel with a lower percentage rating is a great way to save some money. The fuel will have less nitromethane which will slightly sacrifice some of the performance of the car. However, you may not even notice the change in anything but your wallet.

Expect a performance drop of around 5 percent on low-end nitro RC cars, and a little bit more on advanced RC cars. If you switch to 10 percent fuel instead of 20 percent fuel, you could save up to 5 bucks per refill.

Related Post  The 5 Best RC Cars For Off-Road Use

This certainly sounds obvious yet most hobbyists overlook this tip. A well-modded motor is a great way to save on fuel. It offers significantly more fuel mileage than a stock car will.

The way you drive your car will also have an effect on how much fuel it uses. Just like your normal car if you accelerate hard and don’t ever coast then you will use a lot more fuel than you would if you are more gentle with the throttle.

Of course one of the fun things about nitro RC cars is driving them harder than you would your normal car so this isn’t a good option for most people.

Use an electric car

When it comes to saving money on fuel the easiest way to do so is to use a car that doesn’t take fuel! You will of course spend a little money recharging the batteries but it will be significantly less than what you would spend on nitro fuel.

Of course the huge downside with battery powered cars is that you lose the amazing sound of a real motor and the life-like exhaust as well.

Unfortunately, you can’t use diesel or gasoline in your nitro RC car without damaging it. There are ways to save some money on nitro fuel with the best option for most people being buying the ingredients in bulk and then mixing your own nitro fuel. Of course this can be a messy job but if you are trying to save some money then it is a great option.

Nitro RC cars are a lot of fun but the fuel can certainly add up quickly so if you are concerned with the money that you are spending it might be a better option to just go with a battery powered vehicle.

If you need some help deciding whether a nitro or electric RC car is right for you then you can check out the video below.