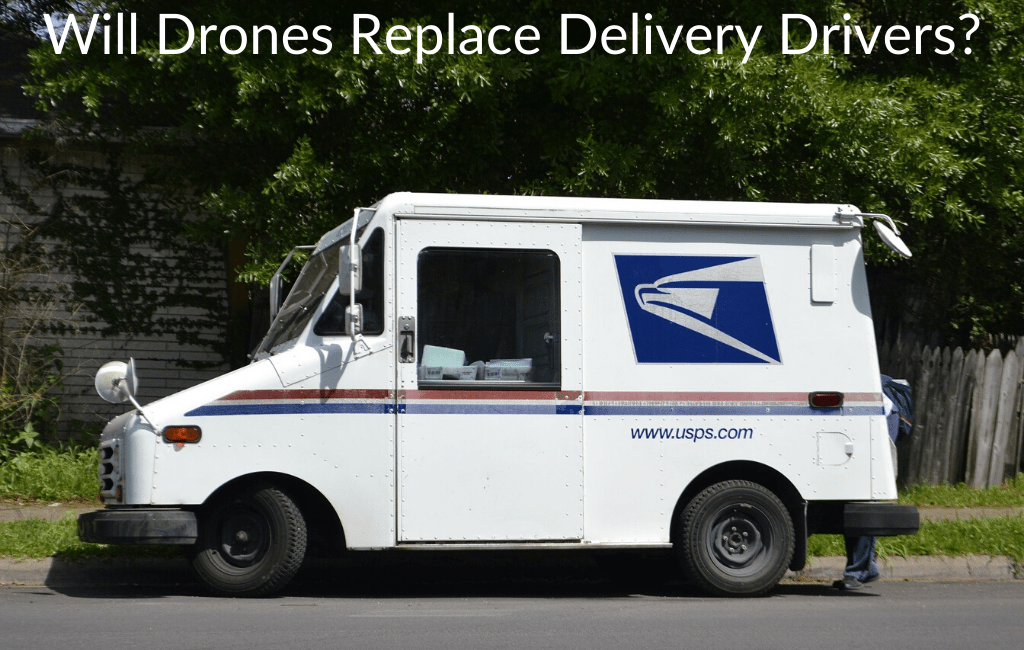 Drones have continued to advance in technology over and over again. Drones features that used to cost thousands of dollars are now available on drones that only cost a few hundred dollars! As technology has gotten better and cheaper using drones for commercial purposes has looked like more and more of a reality.

So will drones replace delivery drivers?

It is likely that in the future we will see drones making many local deliveries. Drones could conceivably be used to deliver everything from packages to the mail in just a few short years.

However, when in the future drones will start replacing delivery drivers or even mail carriers is anyone’s guess. The main factor currently is that drone batteries are not strong enough to power a drone for a long period of time… yet. Batteries are getting better and smaller (as evidenced by our smartphones) but they are not good enough yet that drones could be used for everything.

Radar and other technology will also have to advance as well so that all of the drones in the air will not run into each other and destroy what they are carrying.

To learn more about drones and deliveries check out the video below.

Are drones currently being used for deliveries?

There are currently many different test runs being done using drones with the most prominent one happening in Virginia using Alphabet’s (Google’s parent company) Wing delivery service. People could use the service to purchase and receive certain items from Walgreens and other stores in the area.

However just because there are test programs being rolled out in different locations in the USA doesn’t mean that delivery drones will be filling the skies everywhere anytime soon. There are likely multiple years worth of kinks to work out including the size of items that can be delivered as well as the ongoing costs for drone fleets vs the cost of delivering the traditional way.

Drone deliveries are currently happening and will likely be expanding to many more locations soon. That is especially true in major cities that are near large warehouses or distribution centers as those places are likely to roll out drone deliveries much faster.

What types of jobs could be taken over by drones?

When we talk about drone deliveries it makes sense to talk about what jobs will be affected or lost because of the changes from using trucks to using drones. Which jobs will drones affect though? Will there be any delivery jobs not affected?

It is likely that all delivery jobs including mail carriers, UPS, Fedex, food delivery, etc. will be affected in a great way once drone deliveries become widespread.

Whether those jobs will disappear entirely or just change in a great way it is hard to predict. There could still be delivery trucks driving around for heavier items or for items that a drone could not easily carry. For example if you order a large sign it wouldn’t be heavy but the wind resistance would be substantial which would make delivering it with a drone quite difficult.

The same would be true of food that is delivered. Some food (such as sandwiches) would be easy to deliver with a drone while drinks or other messy things would be much more difficult for drone delivery.

However, despite the difficulties some items being delivered with a drone would present, it would not surprise me to see drones being used for virtually every delivery sooner rather than later.

How does drone delivery work?

Drone delivery of course sounds cool and futuristic but there are some things that are still a mystery about it. How exactly does it work? Does a drone just randomly drop your package somewhere and you have to go find it?

Related Post  How To Get An RC Plane Out Of A Tree?

In the places that drones are being rolled out you can choose where exactly you want the drone to leave the package at. The drone will either land or hover inches off the ground before releasing the package to prevent damage as well.

Honestly the likelihood of a package being damaged with drone delivery is less than when delivered the traditional way as you don’t have a ton of other packages in the truck that could crush yours. Drone delivery will also allow you to have your package left in a more secure location than traditional deliveries.

With a traditional delivery everyone knows that it will be by the front door but with drones you could have it left in your backyard, on a patio, or a variety of other more secure locations.

Of course drones being taken down to steal the packages is a possibility but in our opinion that is less likely than people simply running up and grabbing packages off of a front porch. Having all of your deliveries left in a more secure place where it can’t be seen if you got a delivery or not would certainly help discourage package theft.

What are the benefits of drone delivery?

Some benefits of drone deliveries are:

There are probably many other benefits of drones being used for deliveries as well but these are some of the biggest ones. Each of these benefits will help many people like drone deliveries and getting used to them won’t be very difficult as well.

I know I would love getting all of my purchases delivered into my backyard and not having to worry about how careful someone was with them during the delivery. It would also be amazing to never have an item that was put in the wrong mailbox or left at the wrong house again too!

Related Post  How To Hang An RC Plane On The Wall

As mentioned earlier in this article it is likely that drones will be used for not only package delivery but also food delivery in the future but will that include pizza delivery?

Pizza delivery via drone will likely happen in the future but it will probably be much later than other food deliveries as pizza delivery presents many significant difficulties. Since pizza is larger then it will be difficult to keep it from dragging the drone down or off course if it is windy.

Another thing with pizza delivery is that delivering it as hot as possible is an important thing. It is so important that many delivery places have made specific warmers or warmer bags to keep the pizza hot while it is being delivered. Finding a way to do that via drone will be difficult. Not only that but a strong breeze would cause the pizza to cool down far faster as well!

Pizza delivery using a drone will likely happen but it might require some additional batteries to keep the pizza hot or even require the customer to unpack the pizza from the drone at the time of delivery. However pizza delivery works with drones it is likely we will find out soon.

Using drones for delivery is an intriguing idea and one that will likely happen all over the USA soon. Pilot programs have been rolled out by many companies for delivering different items but it is likely that they will expand the programs to all major cities soon.

As batteries and drones advance so will the delivery options and items that can be delivered. Soon everything large or small will likely be delivered by drones including your purchases of items and food too!