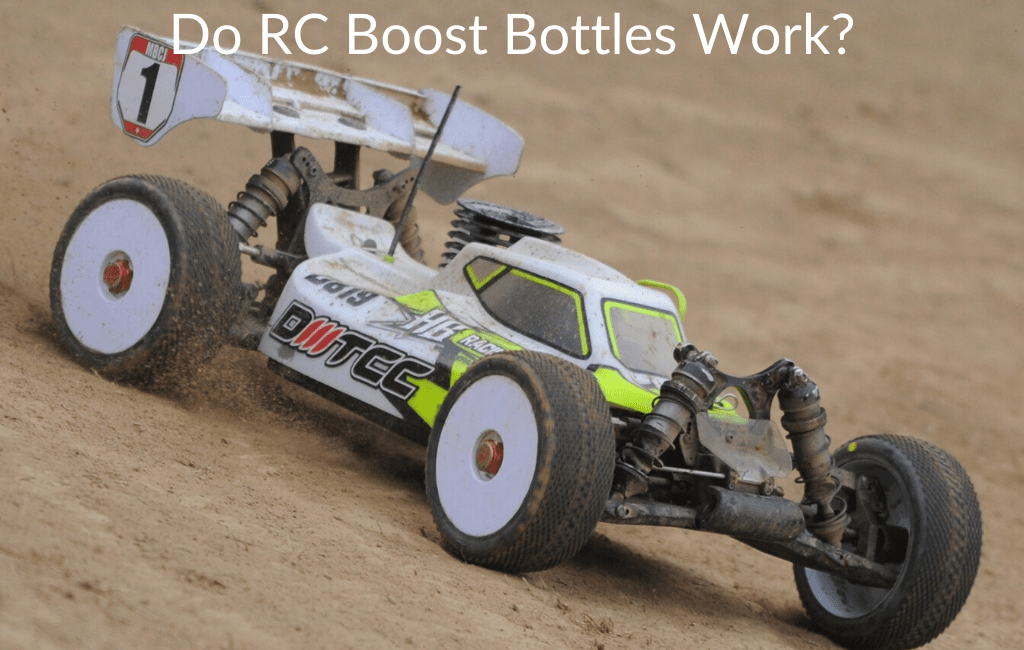 If you look back in the history of nitro RC vehicles, you will find a lot of innovative ideas that were once in high demand. However, with the changing technology, some of those things have fallen to the side and people have moved on.

One of those innovative things from years gone by was the boost bottle. If you have seen an 80’s bike or have to ride it yourself, then you probably already know what a boost bottle is but will a boost bottle work on an RC car like it does on other fuel powered motors like ATVs and motorcycles?

In simple words, a boost bottle is nothing but an empty bottle that is fitted between the reed block and carburetor.  It is normally made of molded plastic or aluminum.

So now that we know a little bit about boost bottles the question still remains of whether they will work with an RC vehicle.

In the rest of this article we will go a little bit more in depth about what exactly boost bottles are and how they work on some 2 stroke engines but don’t work well on RC cars.

If you want to see what a boost bottle can do to your RC car (it’s not good) check out the video below. WARNING: there is some language in this video that might not be safe for work or with younger children around.

What is a boost bottle?

To define it in simple terms, a boost bottle is just a tuning tool. They act as a resonator that needs to be tuned just like you tune an exhaust pipe.

To get the right resonance effect, you need to tune the length, hose diameter, and bottle volume. It is better to get it right at the start, instead of messing it up.

Boost Bottle: How does it work?

With the rising RPM, the flapping and sucking increase too. The hose of the boost bottle is fitted just in the right location which helps siphon the liquid or fuel that is not sucked in by the reeds.

A proper boost bottle can be described as a mini supercharger. It not only gives you extra storage for fuel but also gives you an extra supply of fuel when the engine vacuum is in the right direction.

Boost bottles were once considered to be very effective. Despite that, they couldn’t make it until the present time as they are no longer used in many instances. They existed for a long time but suddenly disappeared from the market and they never worked well at all on RC cars.

Benefits of An RC Boost Bottle

The main function of a boost bottle is to absorb and release pressure pulses within the intake. It helps in engine breathing and hypothetically should allow your RC vehicle to have some extra power.

Related Post  How Do You Remove RC Tire Glue From Your Hands?

Air is absorbed through the intake manifold at a great velocity at the time of intake stroke. It is because of this velocity that the air has inertia. The moment the intake valve is closed, the kinetically charged air creates a high-pressure area because it has nowhere to go. As a result, the air travels back the way it came and this leads to the formation of a pressure wave in the opposite direction.

Here are some important things you should take note of before using a boosting bottle. Here you go with the details:

A fine example of using the boost bottle is YZ490. The bike would run completely fine until you ride it in the tight tech trails. This is when the problem arises. This can be taken care of using a boost bottle but again, this is on a bike and not with an RC car.

If you want to see how a boost bottle should work on a bike then check out the video below.

You should not mistake boost bottle kits to be Nitrous Oxide. Boost Bottles can work without any maintenance or fuel additives and they can last as long as the engine. Also, they are not at all dangerous to your engine in any way if installed correctly and on the type of vehicle that they work best for.

link to Are RC Crystals Interchangeable? (What Are They On?)

Flying an RC airplane is extremely fun to do and unlike an RC car, it is not something that is attempted by children. Being able to maneuver an airplane and take it off with your controls is...

Rc cars are so much fun, and if you have ever seen Fast and Furious Tokyo Drift you are probably interested in finding out if you can drive RC cars like they do. Drifting is hard to do, and takes a...