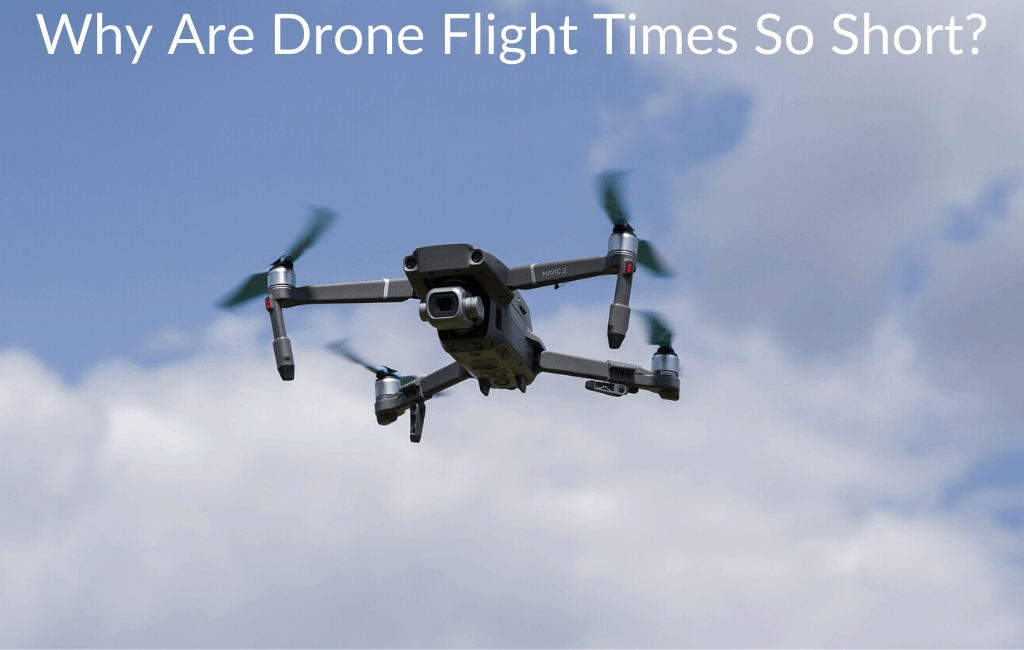 If you are in the market to buy a new drone you may have noticed that the flight times seem incredibly short. For example, most of the cheaper drones found online that are under $100 will have flight times of 7-10 minutes per charge! Obviously that is incredibly short when charging often takes multiple hours.

Even the most expensive drones from DJI still only have flight times of around 30 minutes and they run multiple hundreds or thousands of dollars! Why are the flight times of so many drones so short?

Most drones have a short flight time because a drone needs lots of energy to fly as well as use all of the functions such as camera, stabilization, GPS, etc. Each of these functions will decrease the battery life of the drone and to simply take off or fly uses an enormous amount of power on its own.

For a drone to generate lift and fly, it needs a fairly large amount of energy and put quite simply the batteries that are currently available on the market are not good enough to produce that high amount of power for a long period of time. Batteries have continued to improve and the LiPos that most drones use are much better than they used to be but they are still likely years away from flight times being considered “long”

In the rest of this article we will look at some of the other specific reasons why drone flight times are so short. Each of them have a part in shortening the flight time so combined they are the reasons for the time not being longer.

The primary reason for drones having such short flight times is because their batteries can only store a limited amount of energy. As battery technology has advanced so too have the features on the drones that suck that battery life. You can’t simply add a bunch of batteries to your drone either as if you do the extra weight will cause it to either not take off or to drain the extra batteries faster anyway!

Related Post  How To Fix A Quadcopter That Does Not Take Off?

The heavier the drones, the shorter the distance it can fly with the same charge from its batteries. If you look at micro drones with tiny batteries you can see that they will generally fly almost as long as a full size drone with a much larger battery. This is because the weight of the larger drone requires much more power to take off and fly than a micro drone does.

You should always make sure that the drone you are operating is not carrying any extra load or equipment more than is necessary to try and get the battery to last as long as possible. The heavier the drone is, the more energy it will need to go the same distance in flight.

Weather conditions are also very important. In cold weather flight time can be reduced as the batteries the drones are carrying will discharge energy more quickly which will reduce the flight time.

In warm weather, the batteries of the drone will take more time to cool down before you have the opportunity to recharge it fully. This will also lead to less flight time and more downtime in between flights of your drone.

Rain, fog or higher humidity could be another reason for short drone flight times as they affect the flight of the drone and can make its flight slow or cumbersome thereby consuming more energy.

The biggest weather factor to consider is the wind. If you are flying your drone into the wind then it will use far more energy flying the same distance than it would if you are flying with the wind. If you have ever seen a bird trying to fly against a stiff breeze and not getting anywhere then you have seen the exact effect that the wind will have on your drone as well.

4. Not taking care of your battery

One very important reason that drones have a short flight time is due to not taking proper care of their batteries. If you do not follow the proper procedures when charging or storing your drone batteries then over time they will have less and less power. Conceivably you can cut your flight times in half or more if you aren’t careful and don’t take care of your battery properly.

Take the time to read the manual and see how you should charge it, the proper battery level for storage, etc. and you will keep your flight times as long as possible for that model of drone and battery.

Related Post  Can You Fly RC Planes In The Rain?

How to increase your drones flight time

Obviously since there are things that can have an adverse effect on the flight time for your drone there are also things that you can do to increase the flight time. Unfortunately the total flight time cannot be increased much over the manufacturer’s estimated flight time unless you upgrade your batteries to more powerful ones or if you alter the drone to remove some of the weight.

The first thing that you can do to increase the flight time of your drone is to buy better batteries or to add one or two extra ones. You do have to be careful though that you don’t buy batteries that are incompatible with your drone as that will cause issues not solve them! Adding extra batteries is also a precarious project as each battery adds to the weight and the motor/motors or propellers might not be able to handle it.

You can also increase your drone’s flight time by ensuring that the weather in which it is flying is of optimal condition. The best weather to fly a drone is when the weather is fair and sunny without high levels of humidity, fog, rain or extreme cold. You also will want to make sure to only fly your drone with the wind and not against it to ensure that your batteries last as long as possible.

You can also extend your drone’s flight time by choosing the right type of battery. The weight of your battery is an important issue, so you should ensure that your drone has only the best battery available which gives or stores the most amount of energy per unit of mass.

Basically you want the lightest and most powerful battery possible.

4. Take care of your battery

You should always take care of your drone’s batteries to increase your flight time. You should avoid overcharging your batteries after they get to full capacity otherwise it will make your drone less safe to fly as it will affect the life cycle of your battery making it not as effective as before.

You must always store your battery in dry conditions and in a place with moderate temperatures and also do not let the battery charge to drop below 15%. All of this will ensure your battery has a good long life.

Some drones can also have multiple sources of power but such drones are still not widely available for purchase. Drones with hybrid fuel and having solar or diesel power can have a much longer flight time of a couple of hours but in general these drones are unavailable or too expensive for the average consumer.

We should remember that each drone is unique and has been built for different purposes. For each drone to have the best possible flight time, you should make sure to maintain it properly. It is also important to ensure that you are not flying your drones aggressively or in inclement weather conditions as either of those will drop the flight time considerably.

Drones are usually able to fly from 15 minutes to 30 minutes, but you can get drones at very high prices which will fly for up to 1 or 2 hours.

You should also try to make sure that the propellers on your drone have a large surface area and angle of attack. Such propellers will allow your drone to fly for a longer time as they are more energy efficient.

You might also think that a more powerful motor for your drone will make it fly faster, it certainly will but normally it will come at the cost of shorter flight time. This is because the more powerful the motor, the more energy it will consume, so it will drain the precious charge from your drone’s battery.

This is why you will see that when people race drones their flight time is limited to a fraction of their original flight time as they consume all the energy from their batteries within a couple of minutes, making it impossible to fly for a longer period of time.

Although most widely available drones have short flight time, if maintained and flown properly they can still give you plenty of time and it is easy to purchase extra batteries that you can swap out so you just have to land, change the battery, and then take to the skies again!