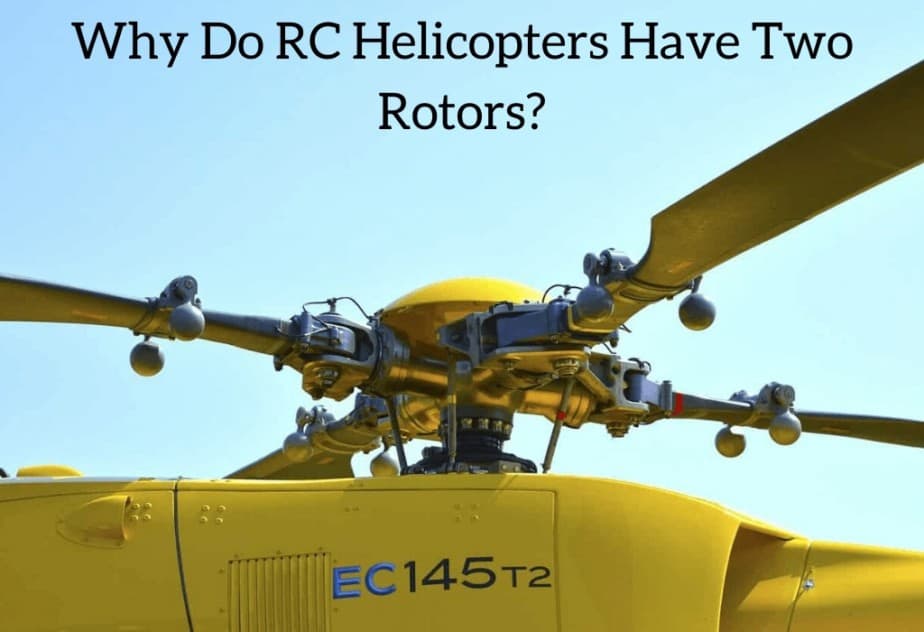 RC helicopters have what may seem to be a very bizarre design. The two rotor (or coaxial) design featured is not a common feature in modern helicopters. So, if you are expecting your RC helicopter to look exactly like a real helicopter, you may be surprised.

In this article, we will explain why RC helicopters have two rotors and what else about their design makes them different than life-size helicopters.

Why do RC Helicopters Have 2 Rotors?

RC helicopters are fixed pitch and they change their altitude by configuring the motor speed and the RPM of the main rotor. The amount of lift generated is correlated to the motor speed. The second rotor is always rotating so that smooth yaw is maintained (right or left rotation). This yaw is adjusted by the speed of the second blade relative to the primary blade.

Small remote-controlled helicopters are too small to effectively control with this method. Two counter-rotating blades are put onto the same axle of these helicopters. Sometimes, tail blades are put on more expensive models so that they have better control.

Yaw control is made easy in RC helicopters through the gyro component. The gyro is an electronic device that is connected between a tail rotor control and a receiver. The term yaw is used to describe the changing of helicopter direction by rotating the nose of the vehicle to different sides.

The gyro can also be referred to as an accelerometer. It senses rotational movement in the helicopter that isn’t the result of signals sent to the receiver. Through fine-tuned adjustments to the blade pitch or tail rotor speed, all the obsolete yaw is removed.

Gyros can make these decisions at incredibly high speeds, so the pilot of the helicopter won’t even notice a yaw issue. They will only feel a very stable helicopter. Gyros also have settings that can be adjusted by the pilot to fit different scenarios.

Additionally, there is an upgraded version of the gyro known as a Heading Hold Gyro. Once it learns the orientation of the helicopter, it will keep that heading until the pilot puts in a manual yaw control that overrides.

After the signal is sent from the transmitter, the gyro will learn the new heading and keep the helicopter pointed in the correct direction until it gets another order.

The benefit of this is that the RC helicopters can avoid all the necessary changes in direction when they are forced around by wind gusts. The gyro knows all the effects from the weather are not changes in the yaw command by the pilot because it didn’t come through the receiver.

This feature was once rare and expensive, but now, it is implemented in almost all remote-controlled helicopter gyros.

What’s the Difference Between FP and CP Helicopter Control?

The cyclic control changes the rotor disc’s pitch angle. This represents the imaginary circle that could be drawn in the air by the blades as they spin. Usually, CP and FP remote-controlled helicopters use a flybar to change the angle of the rotor disc.

Flybars have been used on RC helicopters for many years, but as technology progresses, flybarless systems are rising in popularity. Flybar systems are being replaced by multi-axis electronic stabilization units. They may sound complicated, but they function similarly to gyros, and they can smooth out yaw control.

There are some very cheap RC helicopters such as the 2-channel helicopter. The downside of these is that they are very hard to control because they have no pitch control at all. They only have main and tail motor speed controls, and those controls are sometimes only on and off as opposed to actual speed changes.

The torque force of a 2-channel RC helicopter is compensated only slightly, which means the helicopter will be spinning around especially if the motor speeds have been changed.

With some practice, these helicopters can be flown in wide circles that look like real flights. The controls are also very basic and easy to use which makes them a great beginner RC helicopter. This design only works with remote-controlled helicopters.

Normal RC helicopter controls are a bit more complex to learn but they have a lot more functionality. These controls have:

The Differences Between RC Helicopters and Life-Size Ones.

Remote controlled helicopters have curved flat surfaces instead of the solid aerofoil shape of real helicopters.

The square-cube law of physics states that, when an object grows in its size, the volume will grow faster than the surface area. This explains why bigger animals have a harder time cooling themselves and why it’s harder to build skyscrapers because they are so big.

When this law is used in the context of helicopters, it is apparent that at the scale of a remote-controlled helicopter creates tons of strength and power even if it was made sloppily and from low-quality materials.

On the other hand, a real helicopter is much larger and made to carry people and supplies. A craft of this size is really stretching the capabilities of the materials and engines that are currently available. The highly cambered airfoil of an RC helicopter would not be strong enough for a life-size helicopter blade.

Real helicopters also contain two sets of blades, they are just configured differently. Some big helicopters will have a tail blade or two sets of counter-rotating main blades at the rear or front of the helicopter.

Real helicopters could potentially be built like an RC helicopter, but they would be much less efficient and very hard to control. The main way a modern helicopter changes direction is to use the full pitch control of the primary rotor blades collectively or independently

The two-rotor design of RC helicopters gives them more precision and smoother yaws, so they don’t end up spinning around in the wrong direction. When the two torque forces cancel each other out, the current directional spin is maintained. Essentially, having 2 rotors on your RC helicopter makes it able to fly properly for your enjoyment.